I doubt Nicolai Travis—fictional star of the SLO-based web series Nicolife—would agree with me here, but that’s predictable. What should I expect from a raging egomaniac who demands to be filmed at every waking (and non-waking) moment? 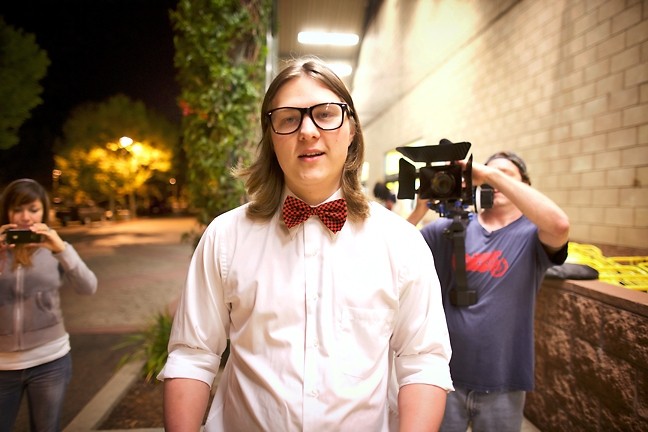 Web series are hot these days. Did you know some of the best TV programs out there—Portlandia, Adventure Time, and Broad City among them—started as humble webisodes?

Now, reach into your pocket and take out the glowing, all-powerful device known as your iPhone. Everything you need to know about Nicolai unfolds in Episode 1, available right now on YouTube. Watch it.

In the very first shots we see a macro zoom of the pores on Nicolai Travis’ nose, the silhouette of his toes, and a single wobbly hair protruding from his nipple. In many ways, Nicolai is the show. Then again, there’s more to this surreal study in human ego.

Swedish transplant and Nicolife writer/director Robin Nyström plays the part of Nicolai with a menacing wink and a sly nod. Think Larry David on Curb Your Enthusiasm, only less self-aware and way more self-indulgent.

“Nicolai is a really self-centered young man who believes that he is made for great things,” Nyström said. “He hires a cameraman to follow him 24/7, and it’s not entirely clear why. We allude that he doesn’t have to work, but we sprinkle this information in. Hopefully everything will become more clear throughout.”

Episode 2 is slated for release the week of June 15, and a host of “video diaries” (more like crazed rants by Nicolai on broad hot button topics) are up on the website nicolife.net. Nicolai on lowering the divorce rate: Legalize polygamy!

I, for one, am curious to see just how this engaging narcissist navigates the tumultuous relationship he shares with cameraman Phil—who plays the straight-faced Silent Bob to Nicolai’s emphatic Jay.

Just watching the pair try to enjoy a cup of Mexican coffee together in Episode 1 made me feel queasy. Spoiler alert! Things get real weird, real quick.

“It’s a very cinematic world, in that Nicolife looks like a documentary, yet it is really a fictitious reality,” said Director of Photography Jason Kaiser, originally from the Bay Area.

Like so many web series, the project was born out of DIY passion and the desire to create without waiting for permission. This is thoughtful art indeed. The tone reminds me of the offbeat series Wilfred, another low budget show that plops the viewer into a strange world without explanation.

According to Kaiser, the show began with consumer level DSLR cameras and Home Depot lights and graduated to pro-level HD gear.

“We got together because we wanted to work on something that would help us grow as filmmakers, actors, and photographers,” Kaiser said. “Even though our budget has not changed, our experience is visible, and you can see that in the progress of each episode.”

Nyström probably brings the most real world production experience to the series. He’s humble and even-keeled—exactly the kind of guy you want delegating creative duties.

The artist first came to the East Coast in ’05 as a Swedish exchange student. After meeting, and later marrying, his wife, the pair relocated from Stockholm to San Luis Obispo. Before that, the former business school student ran his own film trade school in Sweden.

“I made a bunch of short films in Swedish. I directed, wrote, and produced,” Nyström said. “Business school was really boring, so I gave it up and went back to art.”

When Nyström first came to California, he said he felt burned out. The artist considered putting film on the back burner in favor of writing.

“Writing is such a controlled environment. You can sit in your room and be in control of every single thing,” Nyström said. “But then I met Jason and Hartley.”

Videographer Hartley Comfort (yes, that’s his real name) is the show's first assistant cameraman who also plays Phil the cameraman. Together with Kaiser, the three lads make the whole of the Nicolife enterprise.

“The entire project was designed around the fact that we wanted to have this really small team,” Nyström said. “Phil is filming Nicolai, and then that is being filmed, which allows us to get a lot of footage. We use a lot of audio and clips from Hartley’s camera. It’s a concept that allows us to get a lot out of what we do, yet keeps everything very small-scale.”

Probably the most crucial aspect of working on a “no budget” project such as this is ensuring that the team is tighter than Jagger’s jeans. After all, there’s no cash incentive. When you’re trying to capture the sounds of an ATM machine and are instead inundated by police (true story), you have two choices: stand by the creative work or walk away. 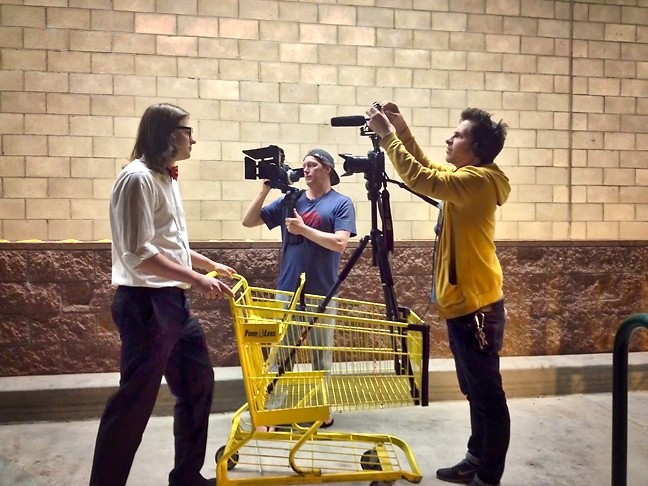 “Jason … he’s the best cinematographer I’ve ever worked worth,” Nyström said. “What I love about Hartley is that he’s the yes man. No matter what needs to happen, he can do it. He’ll go off and build some crazy prop that don’t exist; a camera inside a pair of glasses.”

In his 40s, Comfort is the oldest of the group. He remembers when creating and sharing film wasn’t as easy as uploading a file to the web.

“I was into Super 8 film back in school,” Comfort said. “The amount of information you can now access at a moment’s notice is just phenomenal. You want to share ideas or videos with one or many people? It’s almost instantaneous.”

With any luck, Nicolife will be shared around the world. At the time this article was written, Episode 1 had garnered about 500 hits on YouTube, a few thousand hits less than most lukewarm cat videos.

But it’s never really been about “going viral” for these guys. It’s more about making their own little slice of movie magic right here in SLO.

“The first episode, a morning scene, was shot entirely at night because we all work full time,” Nyström said with a laugh.

According to Comfort, anything can—and often does happen—when you go “all in” on a creative endeavor.

In the case of Nicolife, I’m not really sure what “behind the scenes” really means. Either way, I’ll be looking forward to pulling apart those layers weird episode by weird episode.

Hayley Thomas is ready for her close-up at hthomas@newtimesslo.com.

VIA NICOLAI TRAVIS CHANNEL ON YOUTUBE.COM