While San Luis Obispo County Parks Director Nick Franco believes that nighttime closure is the one of the only things that will address the crime issues associated with Pirate's Cove and Cave Landing Road near Avila Beach, not everyone is so sure.

"Closing off that remote area with a gate or something ... that often just brings only the criminal element to that area," 5th District Supervisor Debbie Arnold said during a discussion at the Dec. 5 SLO County Board of Supervisors meeting. "If this is a public park then we need to start thinking in terms of having some kind of ranger around ... some way it's patrolled, both in nighttime hours and daytime hours."

Other solutions proffered during the hearing included installing cameras in the area and a temporary nighttime closure. But coming up with a project that addresses Pirate's Coves issue's—crime, trash, and graffiti—could hinge on stakeholder input, a request repeated several times by 3rd District Supervisor Adam Hill during the meeting.

"Our hope is that if folks like Mr. [Brian] LoConte and other folks will work with us, is that we can present a plan to the Coastal Commission with stakeholder buy-in," Hill said.

Brian LoConte was one of the county residents who appealed the Board of Supervisor's 2013 decision to move forward with a project to clean up Pirate's Cove. That appeal went to the California Coastal Commission, which denied parts of the project in 2014, including a proposal to close the parking lot between the hours of 10 p.m. and 6 a.m. 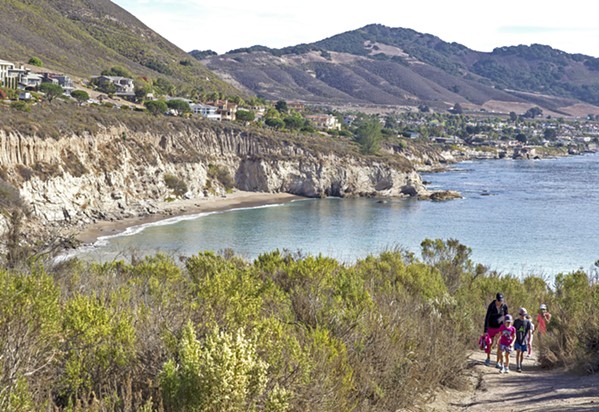 "There isn't a single person in this county who wants a project more than I do, and I've been frustrated, as we all have been," LoConte said during public comment on the issue. "Closure of some type was never off the table; it's just how it was being presented."

The issue back then was that the project called for too much development of the property, according to Dan Carl, the Coastal Commission's Central Coast District director. He told New Times that members of the public made it clear to the commission that the "formalization of the area" was not what they wanted. But Carl agrees with Franco; temporarily closing the parking area at night might be the quickest short-term way to "shock the system back to equilibrium" so it's not quasi-lawless at night.

In June, the Coastal Commission voted to allow Humboldt County to gate off Mad River Beach's parking area at night. The area was having problems similar to Pirate's Cove, but there are a couple of differences between the two projects, Carl said.

"One of the key things about Mad River was that everyone was in agreement about what to do," Carl said, adding that the beach in Humboldt County is not unique to the area, either. There are similar beaches nearby that continue to have parking lot access at night, which is not the case with Pirate's Cove. However, Carl said, it's clear that the issues near Avila Beach need to be addressed.

"We recognize these problems, and we want to help fix it," he said. "They need that constituency to support what they want to do in order to be successful."

And that's exactly what the county Board of Supervisors directed Franco to do: meet with stakeholders to come up with a plan to manage Pirate's Cove as a natural area. Δ