Paso winery owners start with the future in mind 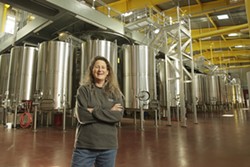 There’s a new winery and tasting room in Paso Robles that’s capturing a lot of attention with its impressive new stone barn winery and expansive hospitality center. It’s the spectacular, new home of Niner Wine Estates, owned by Dick and Pam Niner. Located on Highway 46 West, it’s directly across from the wood barn, a cooperative tasting room shared by Lone Madrone, Stephen’s Cellar, and Kenneth Volk Vineyard. Niner’s focus is on Bordeaux varieties, and all of their wines are grown on their two estate vineyards, Bootjack Ranch and Heart Hill Vineyard. Recently, they opened quietly to give the new staff a chance to acclimate before their grand opening on May 1 and 2.

I visited the unfinished winery in early April and witnessed a very large crew, inside and outside, bustling to get the estate readied for their first industry event. There was much yet to be completed, but I found the crew impressively enthusiastic, from the winemaker to the tasting room manager. For winemaker Amanda Cramer, the state-of-the-art winery is a dream come true. It’s filled with all of the latest production equipment she could have wanted, and then some.

Schooled in enology and viticulture at U.C. Davis, Cramer earned work experiences in Napa Valley at Far Niente, Paradigm, Chimney Rock, and Robert Mondavi. During the early construction period at Niner, Cramer spent a month in Napa and Sonoma visiting winemakers at similarly sized wineries to ask about their production equipment, and what they wished they had now.

“Many of the wineries I visited were older and they began without a grand plan,” she explained. “One of the main points the winemakers made was this: ‘Build it to your final size; don’t build expecting to expand later.’ Mr. Niner was totally on it. He didn’t want to have to expand the new winery at a later point.”

The Niners began building upon their dream of owning vineyards and a winery in 2001 when they purchased their first Paso Robles property, Bootjack Ranch. The vineyard on the east side of town, planted in 1999, was sold by the original owner two years later. Niner farms 11 grape varieties at Bootjack Ranch. In fact, their flagship wine, proprietarily named Fog Catcher, is grown in this vineyard, a red blend of Cabernet Sauvignon, Cabernet Franc, and Merlot. Niner’s line-up of wines, however, isn’t strictly limited to red Bordeaux varieties. They also grow Sauvignon Blanc, Grenache Blanc, Carmenére, Syrah, Petite Sirah, Barbera, and Sangiovese. Heart Hill Vineyard, purchased in 2003, is their home estate where they built the winery and hospitality center on Paso Robles Westside.

Dick Niner, most recently from southern California, grew up in rural West Virginia; he later attended Princeton and Harvard universities. An entrepreneur, he spent 30 years investing in various small businesses, mostly turnarounds. He came to SLO County in 1996 on business, and his interest in farming was reborn upon seeing the beauty of Paso Robles wine country. He purchased the 224-acre Bootjack Ranch, which only had a 54-acre vineyard then. With the expert advice of viticulturist Jim Smoot (now deceased), they expanded Bootjack Ranch vineyard to 125 planted acres. Niner brought in famed winemaker Chuck Ortman to produce the first vintage in 2003. The same year, he purchased the beautiful estate known locally as Heart Hill. The following year, they hired Cramer as full-time winemaker, but it wasn’t until 2007 that the first plantings began at Heart Hill.

Not all of the estate can be planted due to existing vegetation and extremely steep slopes—not to mention the stunning, heart-shaped oak grove for which the vineyard is named.

“We did extensive research in planting Heart Hill, bringing in experts to check out which varieties would be the best planted here,” Cramer said.

Besides the Cabernets and Syrahs, they added Grenache Blanc.

I also met Rick Toyota, Niner’s director of hospitality, formerly with Robert Mondavi Winery in Napa and Disney Resorts. He spoke of the outstanding events they have planned in the hospitality center.

“Pam and Dick were inspired by the kitchens and cooking classes they experienced in Tuscany,” he explained while we toured the professional kitchen at Niner, a set-up any professional chef would covet. “We’re planning many different classes: a winemaking seminar where guests can participate by making their own wine; famous guest chefs teaching cooking classes where guests can work in the kitchen, hands-on with the chef; and we’re adding video monitors of the kitchen on the club room wall that will provide a teaching possibility for our guests.”

Niner is all about providing guests with extraordinary experiences. Outside the hospitality center is a comfortable patio area where visitors can enjoy wine near the wood-burning fireplace.

“In the smaller, demonstration winery (close to the tasting room), we’re planning to make it a learning center,” Cramer said. “We may focus on a certain grape variety each year, and [offer] tastings like a vertical of our Fog Catcher, or a presentation of the key components (varieties) that make up the Fog Catcher blend.”

No matter what your reason for stopping in, you’re sure to leave impressed by the quality of their wines, and the opportunity to increase your knowledge about the fascinating world of fine wines.