Nirvana and Pearl Jam weren’t the only things coming out of Seattle in the early ’90s. Remember Candlebox? They were the first act signed to Madonna’s Maverick Records, and their debut self-titled album from 1993 generated early singles such as “Far Behind” and “You.” That first album—their best selling to date—went quadruple platinum, and the group followed up with Lucy, which went gold, and Happy Pills, which closed out their tenure with Maverick Records as they went on hiatus and tried to escape their contract.

In 2006, the band reformed when Rhino Records released a Best Of compilation, and in 2008 they recorded Into the Sun, which climbed to No. 32 on Billboard’s Top 200 and No. 4 on the Indie Album chart. They’ve had some lineup changes over the years, released their fifth album Loves Stories & Other Musings in 2012, and are currently releasing Disappearing in Airports, which is due out on April 22. This album prompted their current tour, which brings the band to the Fremont Theater this Friday, April 15 (7 p.m.; all ages; $20 presale on ticketfly.com or $22 at the door), for a Numbskull and Good Medicine Presents concert. 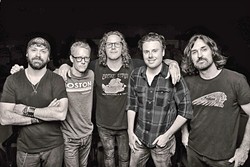 The video for “Vexatious,” a single from their upcoming album, finds the band in good form—energized, rocking, and dropping some cleverly associative lyrics: “All day long (baby)/ So made up (baby, baby)/ All the things that you said you believed in/ another victim of the ‘who’s starring feeling’/ another object, yes, you want the pursuing/ Red dress, skinny mess, lips drawn, you go// Can you do what’s been done?/ Can you shine in the sun?/ So isolated/ Can you make it a day/ without making your way/ making your way to the edge?”

Kevin Martin continues as frontman, but guitarist Peter Klett and drummer Scott Mercado are taking a break from touring with Candlebox to focus on their band Lotus Crush.

“I’m stoked that Pete and Scott are having such great success with Lotus Crush and their other projects,” Martin said in press materials. “I wish them nothing but the best.”

He’ll have to make due with original Pearl Jam drummer Dave Krusen. You know, that guy that played on Ten. New guitarists Mike Leslie and Brian Quinn have also joined in to deliver a lot of shredding guitar fills. Adam Kury’s on bass.

If “Vexatious” and another track I heard off the new album, “Supernova,” are any indication, I suspect Disappearing in Airports will be the band’s best album since their wildly popular debut.

He’ll perform songs from last year’s Reaching for the Moon and debuting new songs from his forthcoming album, Sentimental Fools (due in July). The former frontman of the L.A.-based indie pop/Americana act Last December has a soulful and rustic sound. This should be a pretty awesome show.

Deerhunter plays the Fremont on Sunday, April 17 (8 p.m.; all ages; $23 presale at ticketfly.com or $25 at the door). Hailing from Atlanta, the band got its start when frontman Bradford Cox and guitarist Lockett Pundt met in high school. The pair has collaborated with a number of players over the years, but their current lineup includes drummer Moses Archuleta, bassist Josh Mckay, and guitarist Frankie Broyles.

The indie rock act has grown from lo-fi experimentation to sophisticated ambient punk, shoegaze, and noise rock. Their newest album, 2015’s Fading Frontier, is their seventh studio album since their 2005 debut, Turn It Up Faggot.

Jude Johnstone returns to the Central Coast with a show at Steynberg Gallery on Friday, April 15 (7:30 p.m.; all ages; $20; call 547-0378 to reserve), with Sal Garza on violin and Bob Liepman on cello. This is Johnstone’s first local show since moving to Nashville to be closer to the music biz, where her songwriting has provided her living for decades.

She’s written songs for everyone from Emmylou Harris (“Hold On”) to Bonnie Raitt (“Wounded Heart”) to Trisha Yearwood (“The Nightingale”) to Johnny Cash (“Unchained”) and many, many more.

“Her fertility, in regards to songwriting, is truly awe inspiring,” Bonnie Raitt gushed.

Johnstone, a former longtime Cambria resident won the 1993 BMI Songwriters Award for “The Woman Before Me” and was also the 2008 winner of the eighth annual Independent Music Awards Popular vote for best Film/TV song “In This House.”

Mike + Ruthy is an Americana roots duo that’s chock-full of soul and raw energy … that is when they’re not performing heartbreaking ballads like their 2012 cover of Woody Guthrie’s “My New York City.” Whether on a back porch, around a campfire, or in an intimate venue like the Coalesce Bookstore Chapel or Castoro Cellars, this is an amazingly gifted pair of performers who are at once contemporary and traditional.

“Impossible to fit into a niche, they play raucous old time ‘hoot’ music and follow it up with a beautifully crafted and sweetly executed ‘love’ song,” according to SLOfolks, who organized their two upcoming concerts. “They were the driving force behind the wonderful new-folk Mammals group, and have since refined and honed their skills beyond measure.”

One of my favorite John Coltrane recordings is A Love Supreme, a mix of hard bop and free jazz, recorded a whopping 52 years ago! The deeply spiritual record was Coltrane’s way of acknowledging that his music gifts were given to him by a higher power, a humbling admission for a man who struggled with addiction.

Two years ago, to celebrate the album’s 50th anniversary, the Lincoln Center commissioned The Campbell Brothers to reinterpret the album on their signature slide guitars and within spiritual gospel sound developed over many years in African American churches.

With amazing slide and pedal steel guitars and church choir infusion, this will be one memorable show! Cal Poly Arts dedicates this concert to the memory of Warren Flaschen. A free pre-concert lecture led by Cal Poly Music professor Paul Rinzler begins at 7 p.m. in the Phillips Lecture Hall.

This weekend is Open House at the university, and if you want to remind yourself that your 20,000 neighbors do more than party and park funny, head on over to Cal Poly and prepare to be impressed.

On Friday, April 15, three Cal Poly music ensembles featuring more than 100 of the university’s finest student musicians will perform at this year’s Open House Concert (8 p.m.; all ages; $9 and $12 for students and $12 and $14 for the public; call 756-4849) in Harman Hall in the Performing Arts Center. The Cal Poly Symphony will play two movements from Jean Sibelius’ Symphony No. 2 in D Major, Op. 43. The University Jazz Band I will perform “I’m Gonna Live ’til I Die,” as recorded by Sarah Vaughan; “Haitian Fight Song,” by legendary jazz bassist Charles Mingus; and “Michelangelo,” by Fred Sturm. The Cal Poly Wind Ensemble will close the concert with Johan de Meij’s “Canticles” with bass trombone soloist Rose Doylemason, “Aerospace” by French composer Maxime Aulio, and “Oh, Henry!” a new concert march written to celebrate the life of renowned American musician, composer, and bandleader Henry Fillmore.

Cal Poly’s All-State Music Festival Concert on Sunday, April 17, will present some of the state’s best high school musicians in Harman Hall of the Performing Arts Center (2:30 p.m.; all ages; $9 and $12 for students and $12 and $14 for the public; call 756-4849). Poly’s Music Department has sponsored the festival since 1993, providing opportunities for festival jazz bands and festival wind orchestras.

Also at Cal Poly but not part of Open House is Menopause the Musical on Tuesday, April 19 (7:30 p.m.; 17-and-older; $42 to $72 at 756-4849 or online at calpolyarts.org). This groundbreaking celebration about women on the brink of, in the middle of, or having survived “The Change.” The hilarious musical comedy has adult themes, hence the recommended 17-and-older age limit. 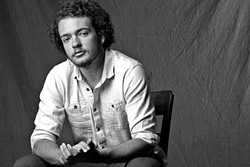 Dorian Michael plays solo fingerstyle guitar and “a big bunch of blues” this Friday, April 15, from 7 to 9 p.m. in Atascadero’s Bru Coffeehouse.

Música Del Río presents Dirty Cello in Atascadero this Friday, April 15 (8 p.m.; all ages; $20; reservations at 466-6941). “Defining musical genres can be difficult,” organizers said, “but it can always open bridges one never expects to hear, so when you take classically trained artists playing instruments never likely to manifest in bluegrass or blues, you just might get Dirty Cello.” Think Bela Fleck’s banjo experimentation and apply it to the cello. 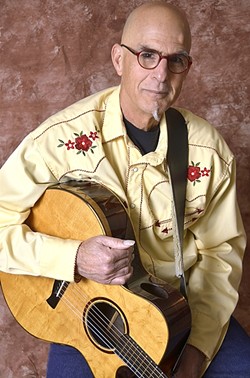 Americana singer-songwriter Ynana Rose plays a benefit concert for GleanSLO, an organization that harvests surplus food to feed people in need. Learn about the organization and enjoy the show this Saturday, April 16, at Sally Loo’s Wholesome Café (7 p.m.; all ages; $15 cover).

Kristen Black headlines the Tuesday, April 19, Songwriters at Play showcase at Bang the Drum Brewery (6:30 p.m.; pass the hat). She may be a nerdy, white-lab-coat-festooned Cal Poly biochemistry professor by day, but at night Kristen will rock you with songs both hilarious and poignant. Special guest performers include Tim Jackson, Derek Senn, and Chicago-based duo KAVA.