Several local organizations are calling for a SLO County planning commissioner to be axed from the position and stripped of his Nipomo "Citizen of the Year" award after he reposted several controversial memes to his personal Facebook page. 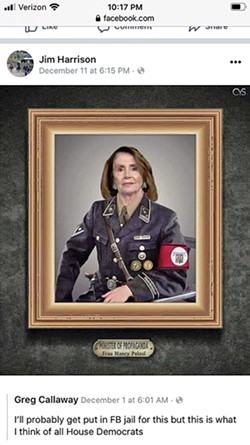 Jim Harrison, who 4th District Supervisor Lynn Compton appointed to the Planning Commission in 2015, is under fire for sharing a series of memes calling for Islam to be banned in the U.S. and likening Democrats to Nazis.

"America needs to shut down all Mosques and ban Islam," reads one post Harrison shared on Nov. 21, 2019, that has since been deleted.

In response to one commenter's mention of the U.S. right to religious freedom, Harrison wrote that while he would normally agree, Islam is "a terrorist group that band and hide under the guise of being a religion." In another post Harrison shared on Dec. 11, 2019, House Speaker Nancy Pelosi is photoshopped into a Nazi uniform in a framed photo titled "Minister of Propaganda."

Rudy Xavier, former president of the Diversity Coalition of San Luis Obispo County and current advisor to its board of directors, called Harrison's posts "quite despicable" and said to have a person with such beliefs honored as one of the county's top citizens would be "a travesty."

In a letter released on Dec. 30, 2019, the Diversity Coalition and several other community groups, including the Jewish Community Center-Federation of SLO and People of Faith for Justice, urged the South County Chambers of Commerce to rescind Harrison's recently bestowed "2019 Citizen of the Year for Nipomo" award.

"Use of such language and imagery diminishes the true horror of the Nazis, who plunged the globe into world war and murdered tens of millions of innocents," the letter reads. "Even worse, the perpetuation of hateful speech and hateful attitudes such as those espoused by Mr. Harrison motivates and empowers people to acts of despicable violence, such as the multiple attacks against Jews celebrating Hanukkah this past week."

"As importantly," the letter continues, "it propagates and normalizes white nationalist rhetoric and violence against all minorities and marginalized people here at home and across the nation."

The South County Chambers of Commerce held an emergency board meeting over the last weekend of December 2019 to discuss the issue, according to Chamber President and CEO Jocelyn Brennan. It being a holiday weekend, Brennan said several board members were out of town and unable to attend, and no official decision was made.

Still, Brennan said the board is in contact with Harrison and working toward a resolution.

"I can say that we didn't have this information when he was selected because his Facebook page was private and now suddenly it's public," Brennan told New Times. "We were very surprised, and that obviously doesn't represent the views of the Chamber."

"There was a post on my Facebook that offended some people," Harrison wrote. "I apologize if it was offensive to you. The post was deleted when this came to my attention."

Supervisor Compton, who many community members and organizations say should be charged with removing Harrison from his position as a planning commissioner, was out of her office and with her family for the holiday season as of Dec. 30, 2019, and couldn't comment before press time, according to her legislative assistant, Caleb Mott.

Though 3rd District Supervisor Adam Hill said he couldn't comment on what punitive action he thinks Harrison should face, he did say he wished Supervisor Compton or Harrison himself would address the situation more thoroughly.

Community members have legitimate concerns about these posts, Hill said. As a person of Jewish faith himself, Hill said he was particularly offended by the posts comparing Democrats to Nazis and Hitler.

Hill won't be attending Harrison's celebratory Citizen of the Year dinner when it comes up, he said, and he won't be signing any of Harrison's honorary certificates or awards.

"We need to stop Nazifying," Hill said. "It's distasteful and it's anti-Semitic in ways I think people don't realize." Δ