San Luis Obispo County is closing in on its $1.5 million funding goal for the Nipomo Skate Park with the hopes of breaking ground on construction next spring.

It's taken more than six years to get to this point in the project process, but if you ask Wyatt Russell how he feels about it, he remains optimistic. 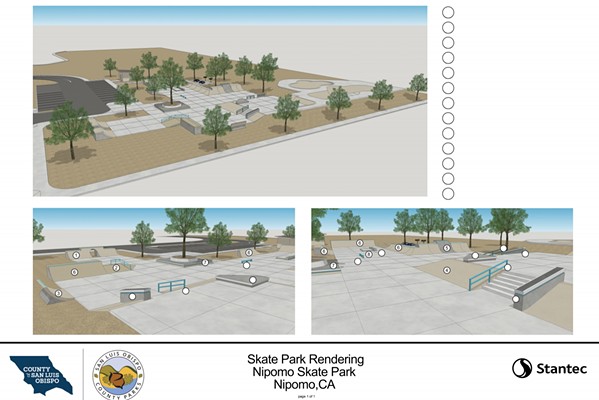 "I've always been pretty excited about the idea, and I never expected it to be a quick process. I'm just glad we've had this opportunity and glad to be a part of it," he said.

Russell was in the eighth grade at Mesa Middle School when he joined the campus Skate and Surf Club run by his teacher, Tom Slater. At the club meetings, he learned about the Nipomo Skate Park project and was encouraged to reach out to his local officials and SLO County Board of Supervisors to see the project through.

At the age of 13, Russell and his peers normally skateboarded in a makeshift skate park off South Frontage Road in Nipomo. The property was private but hadn't been used for several years and lent itself to the local skate community and individuals experiencing homelessness.

He wanted something more, and was engaged in the project process, which included a six-month period of several meetings with youth like him who were using the makeshift skate park.

Russell is now 19 and hopeful he'll be able to test out the new park that he's been a part of since the beginning.

At the Sept. 1 SLO County Board of Supervisors meeting, the board authorized the Department of Parks and Recreation to submit an application for $456,230 in Per Capita Grant Funds for project construction.

SLO County 4th District Supervisor Lynn Compton told New Times she's confident the application will be approved. After that, the project will only need to raise about $250,000 to $300,000 in order to begin the construction process.

"We're closer than we've ever been. There's more of an emphasis, I think, to get the project done because the property that was on Frontage Road where the kids made this makeshift skateboard park was recently sold," Compton said.

A Southern California developer bought it and has already contracted with three to four businesses to put their facilities in that location, she said.

SLO County Parks and Recreation Director Nick Franco said applications for the Per Capita Grant Funds close in December, and the department will only have to wait on the state before it can put the project to bid for a construction company.

The project is ready to go from there, he said, as it already has the construction plans, underwent the environmental review process, and received its permits.

Slater told New Times that the kids using the makeshift park who spent their own time, money, and resources to build their own skate park "on an abandoned slab shows how badly we need this recreational resource."

His club was instrumental in putting a spotlight on the project by creating T-shirts to raise awareness, creating a GoFundMe to raise funds, and taking a seat at the table in designing the project.

The skate park is part of a larger upgrade to the Nipomo Community Park Master Plan, which Slater said is needed for the community at large. The park's goal is to not just be for skateboarders, but to be a place where youth can hang out and families can go as well.

"When you think about Nipomo, there really isn't a central place because the downtown's not developed. There isn't really a central meeting place for young kids, so this will be the epicenter for them," he said.

Slater said the youth are also hoping that there could be a plaque honoring their peer Matt Diaz, 24, who was struck by a car and killed in 2019 as he was leaving the makeshift skatepark. Diaz, Slater and Russell said, made an impact on the local skateboard community and they would like to commemorate him in this way, if possible. Δ