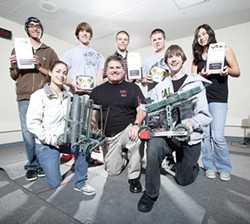 Despite only being in existence for two years, Nipomo High School’s robotics club is heading to the VEX World Robotics Competition for the second time. Fresh from a win at the Bellarmine Bay Area VEX Robotics Challenge in San Jose, the team heads to Dallas, Texas to prove their genius against the best robotic clubs of the world.

The trip comes with some challenges, however. First is raising enough money to get the team to the convention center in time to compete. The team needs to raise at least $8,000 before the competition starts on April 30, adviser Greg Gracia said.

On March 5, teens at Nipomo High School can help out the club by treating themselves to a burger during their lunch period. The general public can contribute when the club puts on a tri-tip sandwich barbecue on March 21 from 11 a.m. to 3 p.m. at the high school.

The second challenge the club faces is keeping their robot intact during the plane flight. “Something can happen to the robot during the flight and we’ll probably spend our one free day fixing minor things and preparing it for competition,” Gracia said. All robots used in the tournament must be no larger than 18 cubic inches, to fit in the traveling box provided for teams.

Using the same machine they have used successfully all year gives the team more confidence going into Worlds this year.

The team anticipates being honored as an alliance captain or being chosen to be in an alliance.

The Nipomo group has been included in an alliance group consistently throughout the year. “That’s what they are proud of the most,” Gracia said. “Consistently being chosen to be in the championship alliance.”

Members of the robotics club were considered to have the best sportsmanship during their challenge in San Jose. They won the Excellence Award, which is given to the team that shows dedication, devotion, hard work, and teamwork. “They always help other teams,” Gracia said. “If their programs aren’t working and other such things. They have a lot of fun working with robots, programs, and just helping people out.”

California FarmLink, University of California Cooperative Extension, and SLO County Farm Bureau are hosting a two-part Farm and Ranch Succession Conference from 8:30 a.m. until 4:30 p.m. on Saturday, Feb. 28 and March 28 at the Courtyard by Marriot in San Luis Obispo.

Succession planning is a critical step in facilitating a smooth transfer of family assets to the next generation. It can provide some assurance that working family lands will stay in agriculture.

In between the two sessions, families will work with each other on a few aspects of their farm succession plan. The conference will offer sessions for both the senior generation and those taking over the reins.

Registration is $70 per person for the first two people in a family, and $40 for each family member thereafter. The fee covers both days, resource packets, continental breakfast, catered lunch, and reception. Scholarships are available for interested parties of any age. Pre-registration is strongly recommended. For more information visit californiafarmlink.org or call (831) 425-0303.

Ancient Peaks Winery of Santa Margarita is offering complimentary personal tours of its estate Margarita Vineyard on the first and third Saturdays of each month starting at 11 a.m. and 3 p.m.

Co-owner Karl Wittstrom or other winery personnel will lead the 45-minute tours, which include stops at Oyster Ridge, where white oyster fossils are visible in the soil, and other notable areas of the vineyard.

Margarita Vineyard is nestled at the base of the Santa Lucia Mountain range near Santa Margarita and is the only vineyard in the vicinity. It is part of the historic Santa Margarita Ranch, which was first planted in vines by Franciscan missionaries in 1774.

The Alzheimer’s Association is pairing up with local restaurants for its annual Food For Thought campaign.

The Alzheimer’s Association serves about 20,000 area residents suffering from Alzheimer’s disease, with programs and services free of charge.