The San Francisco Mime Troupe tells it like it is 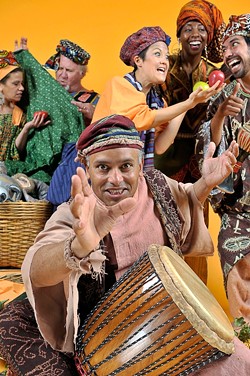 Dick Cheney is everyone’s favorite love-to-hate politician. He’s the only U.S. vice president to shoot someone while in office (Aaron Burr shot Alexander Hamilton during a duel in 1804, but that was seven years after his tenure as VP concluded).  He is, according to San Francisco Mime Troupe performer Ed Holmes, “the biggest dick of them all.” And the troupe’s head writer, Michael Gene Sullivan, is relieved that he’s no longer in office because there’s less pressure to write him into every performance.

“For years I had to put Cheney in shows that I didn’t want Cheney to be in,” ranted Sullivan, who has been working with the group for 21 years and writing for the past 17. “There was pressure for us to put Cheney in the show this year. And he’s no longer in office. It’s a relief to not have to blame the old white guys. It’s too easy to blame it on some obvious thing or some type of person.”

With every show, Sullivan has two major misconceptions to overcome. First, the audience expects to get preached at. Second, people tend to believe the adage that you get what you pay for, an attitude that could lead to the false impression that a San Francisco Mime Troupe performance isn’t worth much. Of course, Sullivan can rattle off a list of experiences and items that fall under the heading of “free for the taking”—oxygen, nature, and public schools among them—but it’s easier to simply stage a meaningful professional theater experience and let the word spread.

This year’s show has borrowed a setting from the other side of the globe—Africa. Sullivan was already plotting the troupe’s 2009 show, set in a local bank, when another idea struck. What if he were to satirize micro banks and micro lending, but within the context of a faraway land? The performance, Too Big to Fail, showing for free at Emerson Park in SLO on Sept. 2, is a mythic folktale delineated by an African storyteller.

And the self-described pudgy white guy who has been playing the role of the all-terrifying former ex-president? In Too Big to Fail he escapes that stereotype with a handful of roles, including a lion, a fish, a chief, a pirate and Mr. Evil. Holmes has been performing with the troupe since 1986, a gig that’s both a luxury and time-intensive responsibility.

The San Francisco Mime Troupe is not, in fact, comprised of mimes. Actors both speak and sing, usually loudly, in public parks and other outdoor venues. (Holmes points out that the original definition of mime, as stated by the Greek historian Herodotus, is “the exaggeration of daily life in story and song.”) The collective has been performing its own particular brand of socially relevant theater since 1962, at the only price everyone can afford—free. They’ve fought landmark court battles to protect their right to perform in public parks without the threat of censorship. They’ve satirized, glorified, mocked, and discussed racism, the Vietnam War, feminism, the Black Panther Party,
terrorism and the religious right, as the occasion demanded.

Performers are members of a collective, which runs the troupe. Which translates to lots of meetings, according to Holmes, who insists that’s the reason socialism never caught on in America, “too many damned meetings.” They perform for three months during the summer, traveling across California from their home base in San Francisco. While on the road, they rely upon the kindness of strangers; that is, fans in various cities host the performers, minimizing the cost of traveling and granting the collective greater insight into the communities they visit. Along the way, the actors and musicians are responsible for assembling and breaking down their own stage, exhausting work that leads Holmes to joke that they have “the highest schlep to show ratio in the industry.”

Besides an intense schedule that often involves 36-hour writing bouts on Sullivan’s part, performing in outdoor venues demands bold, brassy, larger than life dramatizations. Some artists simply aren’t up to the task. But for those who are comfortable strutting, singing, dancing, and hamming it up to the audience, the San Francisco Mime Troupe is a source of pride, and thought.

Sullivan echoes these sentiments, recalling his first encounter with the troupe in a park as a child.

“They were talking about real things. I was like ‘this is what’s really going on.’ Lots of theaters deal with issues sort of obscurely. You see the show and then you read about it and you go ‘oh, it’s about war.’ It was just two guys sitting in a room with cabbage, but oh, the cabbage represents Afghanistan.”

Besides entertaining the crowd, Sullivan hopes to make them question the prevailing attitude in America, that possessions unlock the key to happiness. Maybe, just maybe, something as simple and inexpensive as a free show featuring a talking fish can be as gratifying as a formal night at the theater. It’s art by and for the people. Imagine that.

Arts Editor Ashley Schwellenbach once had a talking fish, but she flushed him when he wouldn’t pipe down. Send sushi to aschwellenbach@newtimesslo.com.