For the first time in 40 years the Santa Maria Speedway season closes early, and drivers are questioning the future of the racetrack

It was the first heat of the night and Bakersfield's Zack Forster, in the No. 32 car, was fighting the mud and the corners to get past a Santa Maria car.

This was the big race, the Bakersfield/Santa Maria, East vs. West, Super Street Stock Championship. And for each lap of the race, Forster had managed to stay just ahead of Willy Oathout's No. 15. They took each sloped end of the track at full speed, sliding on all four wheels through the curve and then blasting out onto the straights.

As the two cars took the last corner on the last lap, No. 15 made a final run for it, sideswiping Forster as it tried to pass below him. The cars audibly slammed together, then slid through the rest of the high-speed turn, and for a brief moment Oathout nosed ahead.

But it wasn't enough. Out of the turn, and only a few hundred feet from the finish line, Forster blasted ahead into third place and into the finals of the unexpectedly last race of the season at the Santa Maria Speedway. 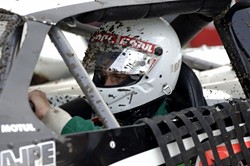 #The Speedway, the only racetrack on the coast between Watsonville and Ventura, is older than most of the men - and the few women - who race there.

Built on the border of San Luis Obispo and Santa Barbara counties in 1964 by Doug Fort, the dirt track has survived flood, encroaching development, and thousands of high-speed races. But this year, for the first time in its history, the track shut down several weeks early, cutting short its racing season due to financial problems.

This is not the only track in California with money woes: Several asphalt and dirt racetracks shut down for good this year - Mesa Marin in Bakersfield, Silver State Speedway in Carson City, and Cajon Speedway in San Diego. Tracks in Hanford and Watsonville cut their seasons short as well.

But Larry Ulam, the Speedway's promoter/track director, thinks his track's problems are more localized. Ulam is Fort's stepson, and his mom, 82-year-old Nettie Fort, has owned the track since its builder passed away five years ago. A few days after canceling the end of the season, Ulam invoked Fort's memory as he explained the decision.

"If we would have stuck with the Doug Fort business plan, we wouldn't be here," he lamented, the stress obvious in his voice.

Ulam wasn't generous with details on what went wrong, but he did offer this: People who haven't historically been associated with the track convinced the owner to make major upgrades to the sound system, lights, and bathrooms. By the end of the season, he said, Nettie Fort was spending money out of her own pocket to stay open.

In the racetrack's pits on that final day, the truncated season was on everyone's minds. Forster, the driver of the No. 32 street stock car, wore a bright blue jumpsuit, a blue Daytona 500 baseball cap, and a quick, big grin. He thinks the closing has less to do with money and more to do with the 70-something houses slated to be built on the mesa above the track - something Ulam adamantly denies will affect the Speedway.

But no matter what, Forster wasn't worried about having a place to race. "Some rich racer is going to build something," he said. "These people aren't going to stop racing."

A hundred feet away from Forster's car sat Paso Robles' Rick Wilkinson, who also drives a street stock car, No. 20. Wilkinson said he understood that there were money problems, and didn't hold the closing against the owners.

But if he were irritated, it would have made sense: Today he was No. 8 in the racetrack's rankings, and he might have made up the difference in those final three races. Now with just this one, he said, "It makes it a lot harder."

Street stocks, the type of car that Wilkinson and Forster drive, are one of several types of cars that race at the Speedway. The names are bizarre to an outsider - Bandit, Late Model, Mini Stock, Factory Stock - but each classification determines the weight, power, size, and ultimately, skill of the driver.

For instance, a mini stock car and a factory stock car must use the engine, frame, and suspension that came with the car when it rolled out of the factory. But minis have smaller bodies and engines than the factory stocks, so they go a bit slower.

Wilkinson explained the differences between two other types: street stock and late model. Streets, he said, start as a normal car and are then stripped down, have a roll cage installed, and are covered with sheet metal. Top speed on the Santa Maria Speedway, he estimated, is high 60 or low 70 mph.

#If street stocks are a step above factory stocks, then late models are the top guns of the track. Made of metal tubing and covered in sheet metal, they're lightweight and very powerful. Wilkinson estimated they'd easily hit 80 mph at the Speedway. "They're skateboards with engines," he said.

The power difference in the cars also determines how they drive on the Speedway. To picture the track, imagine a giant, chocolate-frosted oval doughnut, mashed down by a fist that's slightly smaller than the doughnut itself. Sloped on the far corners, flat on the straightaways, its surface is slick mud that requires talent to drive on - especially since drivers take every high-speed corner in a four-wheeled controlled slide.

Forster spent two years driving factory models and is just finishing his second year in the street stock division. His first race, his said, he was lapped maybe five times by other cars. "I came out here all the time and you think it looks so easy. It's not," he said.

Out on the track, first the minis and then the street stocks were going through their qualifying laps. Each car was timed for two laps and then placed in a heat based on that time. Wilkinson's dad, who's part of his pit crew, stood with a clipboard as each street stock car roared around the track and its time flashed on the scoreboard. He ticked off each result, comparing it to the No. 20 car. Rick walked up after his laps: "Looks like No. 3. Could have been worse," he said.

The pits are boring as the drivers qualify. The sky gets darker. The portable bathrooms get plenty of use: several for the guys; one clearly marked for the women. Up above, giant lamps come on and it's easier to see the stands are filling with spectators.

At the top of the stands there is soda and beer, corn dogs and burgers and fries. Down in the pit there are fresh grill hamburgers. But no alcohol. That's banned until after the races. That's not to say it's not on hand: Several pit crews had a cooler at their station that sat closed, ready for after the final lap.

When the qualifying is done, the heats start. And first up are the mini stocks. Nipomo's Debby Ferrara drives a black Toyota Celica with her name on the roof; tonight she was up against six other men and the evening's only other woman racer, Kristy Gilbertson of Orcutt. The heat starts and the cars, most of them Ford Pintos, are much faster than they look in the pit.

Ferrara and Gilbertson elbow their way through the corners and gun it on the straights, but neither of them make it into third place tonight.

Then it's time for the street stocks, and the mood and the sound level shifts upward. First there's Forster's heat, with its almost-photo-finish battle. And then Wilkinson, wearing a green jumpsuit emblazoned with the same dollar signs that dot the outside of his car, climbs in through the window and puts on his helmet. Next to the steering wheel there's a photo of his two children.

But Wilkinson's heat is almost anticlimactic. He pulled ahead at the start and never looked back, finishing far ahead of the nearest racer.

After the race he sat quietly writing in a notebook while his dad scraped mud from the car's sides and another crewmember tinkered under the hood.

In the center of the pits, cars were lining up for another heat, revving their engines and sending clouds of exhaust billowing up in the bright floodlights. Out on Highway 101, headlights drifted by.

By now the crowd was warming up, cheering the factory stocks as they raced through their first heat. On one corner, a car spun out on the deep ruts as it jostled with the pack. A warning flag went up and the race slowed as men in yellow jumpsuits ran across the mud and dragged the car's muffler and six feet of tailpipe off the track.

#Later that night, Wilkinson would come in third in the final race, the East vs. West Championship. Despite entering the race No. 8 at the track, his finish gave him just enough points to reach the No. 1 spot, and the Santa Maria Speedway Street Stock Champion title.

Forster finished 15th in the final race, and 14th overall in the season.

Ulam, the track director, thinks the Speedway will also finish well. A few days after the last race, he was calmer about the track's future. And more hopeful. He said his family was having a meeting in October to discuss how the speedway would be run, which he hopes will be closer to his stepdad's business model.

"I want to alleviate any worries," he said. "We've been running the speedway since 1964 and I can't see why we can't continue to do so. We're not closing; we'll be open and running in April.