This is how Lori “Lo Lo” Nunes broke the ice during an interview at her recently opened Pismo Beach restaurant, God love her for it. With fierce, hazel eyes and shock of platinum blonde hair, this petite powerhouse is a legit culinary hurricane. 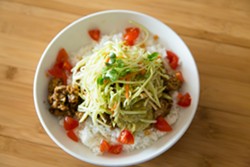 At the chef’s plainspoken request, I will not let a single juicy detail slide: Nunes loves to entertain herself and others by making hilariously absurd noises while cooking, wishes she had more time to beat the drums like a wildebeest, and is ferociously loyal to her kitchen family.

It’s no secret, however, that the owner/chef/philosopher radiates authenticity and unbridled verve. That larger-than-life personality spills over into all that she creates.

“I love to be in the kitchen and just feel the dining room filling up with laughter, excitement—just volume,” Nunes said. “It’s what’s inside of me, what drives me.”

With this chef, what you see is what you get. And what you get is global fusion fare on steroids. Case in point: The chef’s popular “Balls of Steel”—deep-fried arepa dough stuffed with roasted habanero peppers, cheese, and exotic spices, paired with pickled cucumber and creamy chipotle aioli. If you must know, there is also a lip-smacking “sushi in a ball” version, too.

These menu items alone should provide you with a good indication of Nunes’ off-the-wall antics. Or maybe you’ve already visited the funky brick-and-mortar restaurant, which opened in April of this year. After years manning her popular KunFusion food truck, the brick-and-mortar location represents an epic goal realized.

Framed food truck photos and a true truck tire installed into the façade of the gleaming bar hint at this well-worn origin story. In 2011, the chef counted herself as one of a handful of fledgling food truck owners aiming to up the caliber of the utilitarian taco truck culture.

That’s how KunFusion started: with four wheels on the pavement and a dream to feed people something entirely new.

“I sold my Lexus and got a 1985 P30 step van from a man in Fresno that was probably never going to see the road again,” Nunes said. “It took my dad and me months of eight-hour days rehabbing it.”

Her parents, now in their 60s, are still involved with the restaurant, and as Nunes has said, “they can work me under the table.”

A tough work ethic appears to run in the family. Nunes, who graduated from culinary school in Fresno after departing from a high stress career in sales, is no stranger to taking risks.

The new food truck purveyor wasn’t going to serve burgers or burritos, oh no. She was going to serve arepas. You know, the traditional corn cakes popularized in Venezuela.

What could possibly go wrong?

“A lot of people didn’t understand them. They were too dense and hard to fold,” Nunes said. “But everyone else was doing sandwiches, and I knew I would never go that route.”

Essentially, Nunes posed an entirely new question to the eaters of SLO County: Hey! Would you guys be down to try some interesting Asian fusion eats served hot from a mysterious truck?

The answer—miraculously—was a resounding, “Yes.” Since then, the chef has hooked thousands of fans throughout the land. 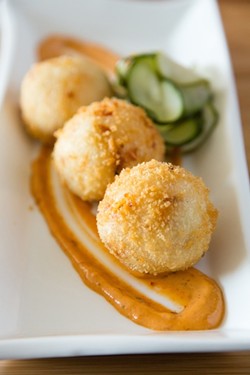 “I was just doing something utterly different, and to this day, you can drive down Higuera and still not see the kind of food we offer,” Nunes said. “I feel KunFusion is truly the best kept secret in the Five Cities area. The locals don’t want the word to get out too much because they want to keep it to themselves.”

When asked how she came to cook in such a worldly way (international trips? Multi-cultural family?) Nunes simply said she’s always been attracted to the exotic—the unknown.

“I was always the one, when I walked in to the pantry at school, that would grab the big bag of quinoa,” Nunes said. “People didn’t even know what quinoa was then. I remember taking a basic chicken noodle soup and making an Asian coconut quinoa version. My cooking totally ticked the instructors off.”

“You can come here with your family, and mom’s gluten free, dad’s a carnivore, and the kid is a vegetarian,” Nunes said. “At KunFusion, everyone can eat; we can accommodate that, and I don’t know of many places that do.”

Nunes said she always knew she’d be a different kind of chef, going all the way back to her school days of doodling the word “KunFusion,” (which she thought would be the perfect name for an Asian fusion restaurant) in her journal.

“I knew I would never be an executive chef; I’m way too entrepreneurial and hands-on,” Nunes said. “Once you stop learning, you might as well quit. I don’t feel like I’ve hit my stride just yet.”

Although the chef is confident in her work, she’s far from pompous. Nunes divulged that many of KunFusion’s most brilliant recipes—the Ahi-Tada “tostada” or KunFudilla oozing with Shitake mushrooms and goat cheese—actually originated from “happy accident” moments.

Boiled down, Nunes believes in hard work while simultaneously welcoming serendipitous success. It’s the kind of philosophy that Confucius would probably be seriously down with.

The chef is also perpetually in motion, a trait no doubt left over from her hectic food truck days, where a three-hour lunch rush quickly produces sore feet and aching bones. If you ask me, she’s got FTPTSD (Food Truck Post Traumatic Stress Disorder), and uses it to her advantage.

“The adrenaline was always, ‘Go, go, go!’” Nunes said. “At the restaurant, we have three-and-four minute ticket times. Something is always nipping at my heels.”

Getting the chef to sit down for an hour was quite the feat in itself. Between answers, Nunes scurried off to the kitchen to check on the jasmine coconut rice or spice the tempeh. She’s really the only chef that I can actually describe as bouncy. Her passion is palpable.

“I don’t just love to cook. I love the fulfillment of feeding people and trying something different, enlightening them, and getting a great response,” Nunes said. “This is my life, my legacy.”

Hayley Thomas can be reached at hthomas@newtimesslo.com.