No more prayer in Pismo Beach

After deliberating for more than five months, the Pismo Beach City Council unanimously agreed during its April 15 meeting to settle a lawsuit objecting to the city’s public prayer practices. 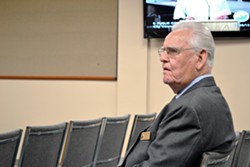 As a result of the settlement, the city chaplain position—previously occupied by Pentecostal preacher Dr. Paul Jones—will cease to exist, all types of prayer at council meetings will be discontinued, and the city will pay $2 in nominal damages to the plaintiffs and at least $47,500 in attorney’s fees.

“We’re very happy that the city has decided to end this exclusionary practice and make their meetings more welcoming to all citizens,” said David Leidner, a board member of the Atheists United of San Luis Obispo (AUSLO). Dr. Sari Dworkin, an AUSLO member and self-identified “atheist Jew,” was the local plaintiff in the lawsuit.

The suit, which was filed on Nov. 1, 2013, in San Luis Obispo County Superior Court, alleged that prayers conducted at Pismo Beach City Council meetings were unconstitutional, requested a permanent end to said prayers, and sought to declare the city’s appointment of Jones as city chaplain as unconstitutional.

Additionally, Dworkin and the Freedom From Religion Foundation—a Wisconsin-based nonprofit dedicated to maintaining the separation of church and state and a co-plaintiff in the suit—pursued nominal damages and attorney’s fees in the suit. They will each receive $1 in damages, and the two attorneys who prepared the suit will split the $47,500 in compensated fees.

“We are thrilled with this precedent-setting total victory,” said foundation staff attorney Andrew Seidel. “That said, we’re sad that there will be a burden on taxpayers when Pismo Beach could have just done the right thing in the first place.”

The council vote to approve the settlement in closed session was 3-0, with council members Kris Vardas and Mary Ann Reiss absent for the meeting.

During the 2005 council meeting that first created the city chaplain position, former city manager Kevin Rice warned against the “undetermined legal risk” the city was assuming by creating the position in “California’s litigious climate.”

In his agenda report, Rice reminded the council of a 2003 resolution that expressly prohibited “sectarian” invocations at council meetings. The council created the position and appointed Jones anyhow, acknowledging “the blessings that the creator has bestowed on the citizens of Pismo Beach” in its resolution.

In a news release, Pismo Beach City Attorney Dave Fleishman and City Manager Jim Lewis said the city denied liability in the case, but the council “determined that it would not be a prudent use of public moneys to contest the suit through trial.”

James N. Procter—an Oxnard attorney who also represented the city in the suit—didn’t respond to requests for comment from New Times as of press time.