No peace in the Valley

Marauding sheep, property rights, and Jello in the sky

Highway 58 winds east from Santa Margarita, whipping past wild blue lupines, various scrub brush, and lush valley oaks on the way to Bakersfield. Before that, though, it has to pass through a long series of hills and curves, California Valley, and the Carrizo Plains National Monument. It’s the kind of drive that makes you wish for a soft top to fold down and at least six cylinders firing instead of a beat-up station wagon with low tire pressure. The road is narrow and there’s not a speed limit sign in sight.

When at last the patchwork road breaks through hills into the plains, the sky opens and the horizon, far and low, is blurred only by the dust, which 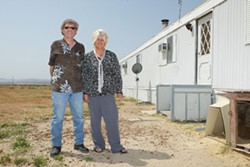 hangs in the air like fruit in a Jello mold. The sunsets are beautiful and later the air is quiet and free of light pollution—an astronomer’s dream. Still, bad blood seeps through the grassland like the oil that lies beneath and, if you listen close, the wind is whispering stories of embezzlement, salty wells and persistent discontentment. This is California Valley; a rare slice of pastoral bliss, regularly eclipsed by scandal.

“Receipt of so many complaints should certainly call for an in-depth investigation into the principals and practices of the CVCSD,” the Grand Jury report stated.

The report called for oversight and investigations by several county offices, most notably, the county Auditor-Controller and Tax Collector, to investigate whether tax monies, and other special funds were being used as prescribed by law.

This is notable for a CSD that fell prey to large-scale embezzlement just four years ago, when the CSD’s own former general manager was sentenced to almost five years in prison for skimming more than $300,000 from the budget over about four years—and that’s from a budget that ranged from $145,000 to $200,000 a year.

Each of the county offices declined—it wasn’t within their jurisdiction, they said.

And herein lies a problem: the CSD is a fully autonomous government body and, while their powers are limited, they are more or less left to govern themselves. Even the sheriff has diminished influence on the area because it sits an hour’s drive from Highway 101. Then again, that’s one of California Valley’s appeals to those who live out there—little government oversight.

Perhaps that is what makes the latest battle, over property rights, seem an unlikely one for California Valley and, given the area’s history, one unlikely to have a peaceful resolution. 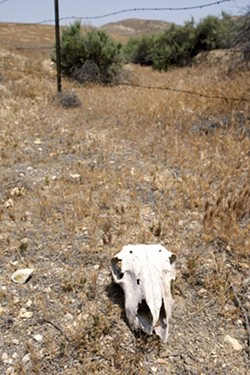 So, imagine that you have a long driveway: It’s so big and out of the way in fact, that you don’t ever park in it, and sometimes you forget it’s there. So the city, which has parking issues, decides to rent out your driveway. Now they collect money from your property, and having cars parked on your driveway keeps the weeds from popping up through the cracks.

Having trouble imagining a situation where the government appropriates your land for profit—without due process and without some kind of public hearing? Well, welcome to California Valley.

In February this year, the California Valley CSD sent a letter to all property owners, informing them for the first time that sheep would be grazing on their private land as a community service. The letters were vague; there was no mention how much money had been or would be spent or collected for the grazing, which the CSD had conducted for decades without soliciting permission. Nor was there mention of what the money would be used for, just that the income from grazing supports general services provided by the CSD.

The money actually subsidizes trash pick-up, so that residents pay a mere $15 per month for the service. The subsidy helps address a sore subject in California Valley, where many residents would prefer to continue to simply burn their trash as they did for decades before a recent Environmental Protection Agency-required ban on the practice.

The grazing contracts were written up under the auspices of weed abatement and fire prevention. Recipients were told to inform the CSD if they didn’t want grazing on their land, and about 30 absentee landowners did, according to California Valley CSD General Manager Sharee Washer. Still, several residents claim they tried to opt out, to no avail.

Now the sheep issue is central to a lawsuit that was filed in April by a group of landowners, in which they ask for an immediate end to grazing and, of course, a little compensation for their troubles.

The basic premise of the lawsuit is that private property rights have been trampled, along with the pristine landscape.

In reality, residents say their worries connected to the sheep are much bigger. The common questions seem to be: How many are out there? How much money is being collected? Is money from the sheep contracts being used appropriately? And most importantly: Why is it so hard to find these answers?

And what everyone seems to wondering is whether the CSD has authority to allow sheep to be grazing on private lands anyway.

Washer acknowledges it may not be.

“It’s not an active power that we have,” she conceded. “All I know, is that the district’s been doing it since 1968.”

Paul Hood is the executive officer of Local Agency Formation Commission, or LAFCO—a regional board, that authorizes the creation and dissolving of CSDs, and authorizes the services that they perform. Hood said that the California Valley CSD has no authority to do anything but build roads and take care of solid waste. He said that he has talked with Washer and made clear that the CSD has no authority to perform either weed abatement services or fire protection.

“It’s not really weed abatement that I think anyone’s questioning,” Hood said. “My understanding is that they’re allowing sheep to be grazed and that it’s a nuisance to the neighbors.”

“I can tell you.” Hood went on. “That they do not have fire protection authority and whatever they have decided to do, is not pursuant to that power…Weed abatement is a completely separate issue, if they are providing weed abatement services, it is without the authority to do it.”

But Hood noted, “We’re not an enforcement agency.”

Basically, when it comes to enforcement and oversight of the CSD, it’s up to the voters to keep the board on track.

“They can vote the current board out of office,” Hood said. “They can have a recall, they could file an application to dissolve the district…they could get their own attorney, and file a suit against the district if they think something’s happened that’s harmed them, legally.

The lawsuit
“We have asked them to stop since May 2005,” Pati Nolan said in an e-mail. “It is completely irresponsible for our CSD to suggest that we, as property owners in a residential-suburban zone subdivision, must fence the sheep OUT—when in fact, the sheepherders are supposed to fence their sheep IN and practice ‘best management practices’.’”

Nolan and her husband are among the 11 people, some longtime residents, and some newer to California Valley, who have put their names behind the lawsuit. For now it’s against two sheep ranchers from Bakersfield: Frank Zalba Sheep Company and the California Valley CSD, and Martin Larralde. Because of the ongoing litigation, Larralde’s attorney declined to comment.

But the suit is being amended to include a third rancher, about whom the group was previously not aware, according to the group’s lawyer, Patricia Scoles.

If the contracts are four years old, and the practice much older, why has grazing now become an issue?

David Webb, who has been in California Valley since the 1970s, and is part of the suit, guessed that two factors are at work: First, California Valley is simply becoming more populated and, second, there are may be more sheep grazing on the land than plaintiffs and residents have been told.

Nolan thinks that the math doesn’t add up.

The real California Valley
Washer, for her part is guarded and deeply suspicious of anyone questioning her budgets and number crunching.

“I’m a little protective,” she allowed. “I don’t like being the target of a witch hunt. I don’t like people from outside coming in here and thinking they know better what’s going on.”

In Washer’s own words, the community could be divided into thirds; one third of the population are retired; one third are working people; and one third are on welfare. There is also a young population big enough to support a school.

There is a church in California Valley—classic white with a little bell steeple—but there is no bar, no general store, not even a place to buy gas or milk.

During the day, the CSD office/post office/library/ fire station acts as a community hub, with neighbors stopping in to chat or to hear recordings of recent CSD Board meetings, which get heated to say the least.

A fiery diatribe delivered at a recent meeting elicited scorn and provided easy fodder for people who were listening in.

“He always does this in church,” one of them remarked about the speaker, who is either hard of hearing, or genuinely outraged at the CSDs performance.

The CSD recently changed their monthly meeting time, from 7 at night to 1 p.m., ostensibly to accommodate the retired population, and yet almost certainly excluding another third of the population—the young and working.

Oversight
Following the embezzlement scandal, the CSD was forced to re-evaluate their bookkeeping. They created an internal finance committee, and now hold regular meetings, which are open to the public. Still, many residents find budget documents impossible to interpret.

One resident, who is not part of the suit, and who wished to remain anonymous rather than incite anger from neighbors, said that the budget was revised three times last year and requires constant attention, to make sure that all the numbers end up in the correct columns.

When the budget was changed in May, several residents assumed impropriety and were ready to herald the California Valley war cry—calling for government transparency and election recalls.

But Washer dismisses such concerns, casually explaining at a public meeting that the yearly budget is a “living document.”

It also doesn’t help that the current board seats three of the past board members who were there during the embezzlement scandal, plus the same auditor who, for four years, missed a quarter of the budget disappearing in sloppily forged checks.

The Grand Jury investigation found no evidence of egregious or unlawful conduct. However the jurors said there are other concerns with management within the CSD.

The Grand Jury made several suggestions for revisions to the internal audit process. None of them, Washer said, have been implemented.

“In their findings,” Hilford said. “[The Grand Jury] try to give recommendations to an entity that will be helpful. And an entity can choose what they want to do with it.”

Staff writer Kylie Mendonca can be reached at kmendonca@newtimesslo.com