With no active plans for repurposing facilities at the outgoing Diablo Canyon Power Plant, San Luis Obispo County will advocate for a full restoration of the site to state regulators next month.

It's one of several positions the county plans to take at an upcoming California Public Utilities Commission (CPUC) proceeding in San Francisco. At stake is the CPUC's approval of $4.8 billion in ratepayer monies to fund PG&E's proposed decommission of Diablo. 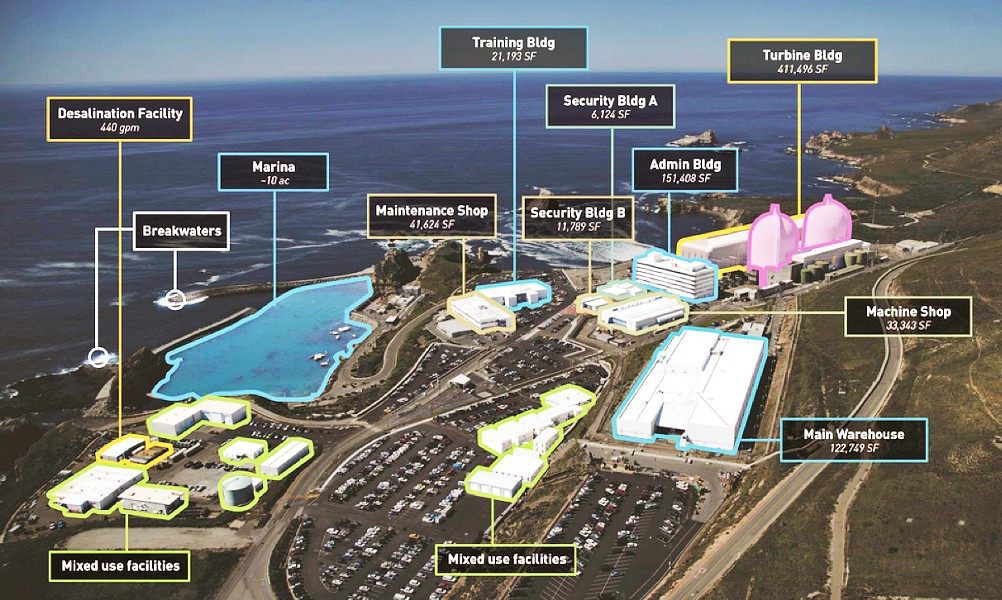 While the nuclear plant's closure has generated significant discussion on the Central Coast about opportunities for reusing site facilities—like keeping the desalination plant for regional water resiliency—county leaders say no concrete plans have materialized, and it's too early to assume they will ever come.

"There's no logical reuse that we can see," 3rd District Supervisor Adam Hill said at an Aug. 20 Board of Supervisors meeting. "We don't want there to be a mixed message or false illusions for the community."

As a result, the county is aligned with PG&E on its request to the CPUC for the funding and for an immediate decommission of the plant. That plan would shut off Diablo's two reactors in 2024 and 2025, start a seven-year process to transfer spent fuel from pools to dry casks, and restore the site to its original condition.

In its statements to the CPUC, the county also plans to assert that it should be considered the lead land-use agency for Diablo's 12,000 acres. That means, under the California Environmental Quality Act, SLO County would oversee the decommission's environmental impact report and have the power to institute various mitigation measures for those activities.

"It really does put us in control," said Guy Savage, a county administrative officer, "of not the actual decision to close or not close [Diablo], but of all the impacts related to it."

County officials also plan to advocate that there be no reduction in PG&E's contribution to the county's emergency operations at Diablo and reiterate that the county has no interest in taking over ownership or liability of any assets at the power plant.

"There's been no promises made or any discussion about the county taking on anything [at Diablo]," 1st District Supervisor John Peschong said.

While SLO County wants to be on record supporting Diablo's full restoration, some supervisors and business leaders remain hopeful that reuse opportunities will eventually surface.

Melissa James, CEO of the Hourglass Project, an organization studying regional economic challenges and opportunities, said she's heard "great excitment and buy-in" for potential uses of the plant's assets. But she agreed there's nothing concrete yet and that the site is "entangled in monstrous complexity."

"While many interesting opportunities may exist, none have been analyzed for their technical or economic feasibility," James told supervisors. "Neither is there an entity willing and able to assume the risk to explore them."

The CPUC's proceedings start the week of Sept. 23, according to SLO County. Δ