No, really, we didn't do it

New Times has been flooded with calls from readers wondering who's behind a pro-Bush flyer found tucked into the pages of recent editions of the paper. 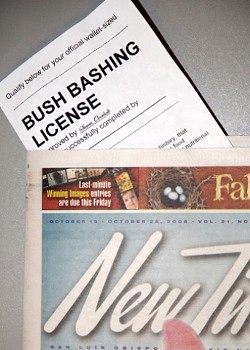 On Oct. 20, at around 10:30 a.m., New Times accounts receivable manager Jenifer Rescola saw a man in his mid-30s sporting a Dutch-boy haircut and high-water jeans grab a stack of newspapers from a rack in front of Cold Stone Creamery. He proceeded to a city bench where he illegally stuffed a flyer into each paper.

A half-hour later, she spotted the same man at Longs Drugs on Marsh Street. Again, he was slipping flyers into newspapers.

The flyer titled "Bush Bashing License" promotes Bush through statements such as, "If the ratio of journalists, by party, were not 6-1 Democrat over Republican, I would not need to be reading this paper. It addresses what one needs to know before fairly bashing Bush."

To legally insert something into New Times, a person or organization must purchase the right through the paper's advertising department.