No rest for the dancer 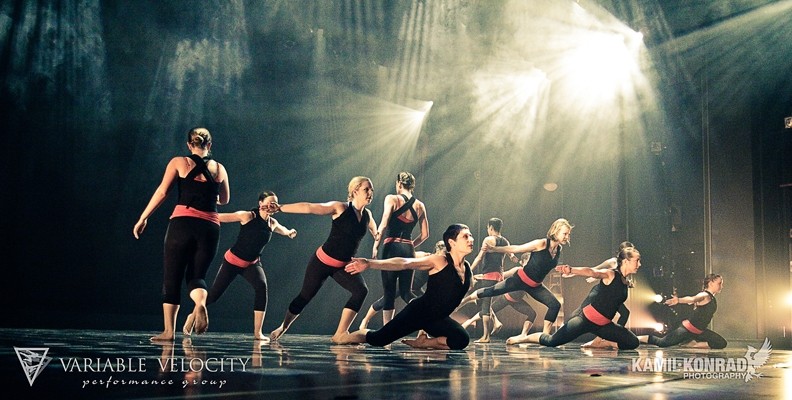 The arts community didn’t really know what to do with Diana Stanton when she moved to San Luis Obispo 10 years ago. The dancer and choreographer—fresh out of grad school—had moved from Boulder, Colo., from an arts scene that embraced innovation and experimentation. In San Luis Obispo, Stanton would do a handstand and people looked at her like she was nuts.

Jude Clark-Warnisher wasn’t having much more luck herself, having located to SLO one year before Stanton. When the pair took turns lifting one another during dance routines, people suspected they were lesbians. When they finally found a male dancer, they wound up lifting him, securing their reputation as oddballs.

“I got tired of the rules and thought, ‘Let’s just have our own show,’” Stanton recalled.

One decade punctuated by annual springtime shows later, the pair is rehearsing Variable Velocity’s newest production, a retrospective, and their first performance at the PAC. Extraordinary Mysteries debuts April 29 and closes with a performance the very next day. To merely open the doors at the Central Coast’s choicest venue costs a small fortune—more cash than a pair of contemporary dance teachers commands. 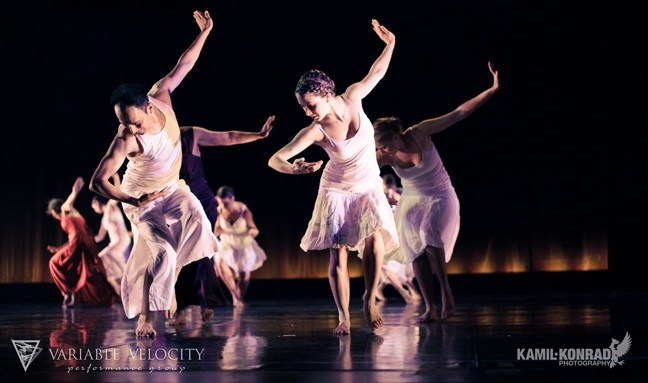 This is the point in the tale where a bundle of money falls from the sky and knocks our pair of deserving artists over the head—perhaps not literally, but in the form of the first ever Bravo Award grant, which Stanton insists was tailor made for their company. The purpose of the grant is to provide local organizations with the means of performing at the PAC. Variable Velocity’s emphasis on experimentation, and particularly their use of video and other technology, secured them the award. For months, Stanton and Clark-Warnisher have been reaching into their choreographer’s hat, pulling out not rabbits but VHS. From tapes of their past performances, they first whittled down 10 years into a five-hour show.

“Most companies do pieces several times,” Stanton observed. “And we create these pieces that take all this time to put together, and then we never do them again.”

With input from their larger-than-usual core of dancers, and even a suggestion from their lighting tech, who desperately wanted to re-do a piece Clark-Warnisher refers to as “Tool” (actual title is “Forgiveness”), they pared the list down. Ultimately, they found themselves with a show that spans as far back as their third performance and touches on material as recent as last year’s show, themed The Treasure of Presence. From the Mundane to the Sublime, the company’s 2006 show, is particularly well represented.

Though some weary choreographers—both founders teach dance at the college level and Clark-Warnisher is simultaneously working on Cuesta drama department’s production of Rent—might regard a retrospective as an opportunity to rest, Variable Velocity is hitting its 10-year-anniversary at full speed.

First there’s the fact that dancers come and go from year to year, so most of the company hasn’t performed more than a few of the pieces they’ve elected to revive. Then there’s the reality that Stanton and Clark-Warnisher are artists who won’t be content to leave the pieces as they were three, five, seven years ago. They want the new batch of performers to make the work their own, and view the retrospective as an opportunity to remedy any flaws they noticed while watching the video. Third, in a company known for the physicality of its choreography, there’s a high ratio of what Stanton calls “suck wind and die” pieces.

“We always try to have a show that has a beginning, a middle, and an end and takes the audience somewhere,” Stanton said, explaining their dilemma organizing the show. They had to find works that were not only strong on their own, but that could fit within the broader framework of a new theme and worked cohesively with other pieces from shows past. If all of this sounds like a lot of thought, welcome to the world of Variable Velocity. Their shows never follow a simple linear narrative.

Simply talking someone through the show is something of a challenge, riddled with side conversations between Stanton and Clark-Warnisher about how much to reveal. And then there are the bits that defy explanation. They open, they tease, with their typical Variable Velocity “antics,” which could mean anything, really. This is a company that’s comfortable using bodies—male or female—as springboards to lift, launch, and support other bodies in motion and rarely confines itself to the stage.

Then comes one of Stanton’s “suck wind and die pieces,” titled “Falling Up,” which debuted during the company’s Heaven is in Your Mind production. Stanton defined heaven as the endorphin rush that accompanies intense physical output.

“Instead of falling down from fatigue, you fall up,” she said.

Clark-Warnisher has several solos, employing various chairs. Stanton has a trio, “Me and the Guys,” in which the group terrorizes the stage on tricycles. Civic Ballet Artistic Director Drew Silvaggio makes an appearance in this piece. The company takes you to a Thanksgiving dinner at your favorite relative’s house, and perhaps fulfills one of your most secret desires by dancing on the table.

“It gets torn apart and twisted around and shifted around, lots of metaphors,” Stanton revealed of the table, which is really three smaller tables brought together.

“And for the finale, we have … ,” Stanton paused and directed her gaze to Clark-Warnisher. “Should we?”