No snobs allowed: The Garagiste Wine Festival gives sippers the chance to take in fine, small-batch wines without the pomp

Photo Courtesy Of 805 Wine Country VARIETY IS IN Garagiste wine educator Melanie Webber sees trends in wine moving more toward experimentation with grape varieties. She has been with the Garagiste Festival from the beginning and wants people to drink what they enjoy. "Whatever floats your boat," she says.

The Garagiste Wine Festival is a nonprofit dedicated to furthering the education of future winemakers and those training for employment within the wine industry. Approaching almost a decade, the small winery festival has become a launching pad for wineries and winemakers. The festival donates proceeds from all the festivals and silent auctions to the Cal Poly Wine and Viticulture Program. Learn about the next festivals—Feb. 15 in Sonoma and April 17 in Solvang— at garagistefestival.com. Visit them on Facebook and Twitter. WSET Level One, Two, and Three will be offered by The Wine House WSET at Broken Earth Winery in Paso Robles in 2020. To register, go to winehouse.com/class-type/wset or brokenearthwinery.com/News---Events/Events.

Yves Simoneau attended The Garagiste Wine Festival in Paso Robles with a planned itinerary, but he took a "delinquent" turn down a row of intriguing mystery vines and fresh new labels. He was pleasantly surprised by the wines of Hayseed and Housdon, from winemaker Enrique Torres, who also makes Enrique Torres Wines and the hand-crafted Diablo Paso Spanish varieties.

"I have delectable regrets," Simoneau said of the diversion.

But, it was worth it.

Raised in Guerrero, Mexico, Torres met his future wife, Nora, from Brooklyn, when she came to Guerrero to study Spanish. After relocating to Paso decades ago, Torres began at the former Martin and Weyrich Winery as a cellar rat, moving up the ranks to cellar master, and then assistant winemaker, benefiting from the mentorship of winemaker Alan Kinne.

These are the types of stories behind the winemakers at Garagiste. These are small, under-the-radar, smooth operators, who spend the majority of their time in the winery and vineyard rather than marketing, schmoozing, and hiring wine reps and distributors to get their bottles in supermarkets.

About 14 or so of the wineries that introduced their first vintages at the now annual festival currently have tasting rooms in Tin City. The majority of the winemakers are based on the Central Coast and span from Mendocino to Malibu. Each is a small-production, artisan winemaker that produces less than 1,500 cases a year.

The nomad winemakers of the Garagiste Festival are among the brightest up-and-coming talents. These garagistes (translation from French: small-scale entrepreneurial winemakers) are the sons and daughters of winemaking families. They are engineers, rocket scientists, teachers, physicians, and pomegranate farmers who started making wine in their garages or basements. And the winemakers personally filled each glass at the Nov. 9 Garagiste Festival in the Paso Robles Event Center. 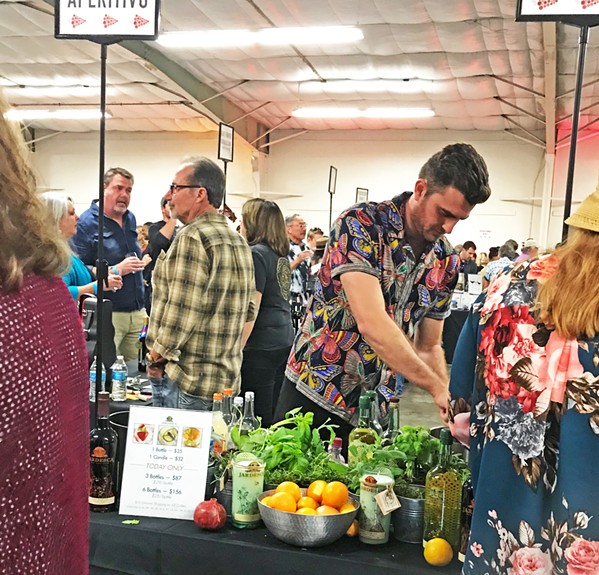 About 70 small-batch wineries were curated for the event, which apparently is a new record. The vibe at the fest was laid-back and casual because "no snobs allowed" is the Garagiste Festival ethos. It's one big, loving shindig. Nobody's acting snooty. Everyone just loves the flavor and nuance of wine, be it red, white, or sparkling.

"One of the things that's unique about the Garagiste Festival is that most other events are varietally focused—like the World of Pinot Noir or Rhone Rangers or the Cab Collective—or they're geographically focused," said Doug Minnick, who co-founded the Garagiste Festival with Stewart McLennan. "Because of our focus on the small wineries, what we end up with, as a result, is this incredibly wide range of varieties and styles."

The idea of gathering some of their favorite micro-wineries under one roof came about in 2010. No big shots. Garagiste also takes wine education quite seriously, and it became a nonprofit festival with an aim to support the education of small and emerging winemakers through the Garagiste Festival scholarship program benefiting the Cal Poly Wine and Viticulture Program.

There have been 25 Garagiste Festivals since then, with four per year in the state. Minnick, who put in many years in the music biz, is the one of the three guys behind Hoi Polloi Winery, with wines made from Paso and Santa Barbara fruit. McLennan and a partner make the local Lefondusac wines we can now taste in Tin City (with his boutique projects: Golden Triangle and JPIII Wines available as well).

Lisa Dinsmore and Melanie Webber carry out the behind-the-scenes tasks and publicity. Webber, who owns a PR firm in Los Angeles, is very passionate about teaching others (not just the privileged). She holds a French Society French Wine Scholar certification in addition to a WSET (Wine and Spirit Education Trust) diploma in wine and spirits, and teaches four levels of WSET classes through the Paso Wine House WSET Satellite program. This year Paso Garagiste-goers were able to attend an hour-and-a-half long seminar designed for beginners and wine geeks created by Webber.

Webber said that nobody's tasting notes are better than another's. Everyone has a good palate, she said, and their opinions about wine are based on personal experience. We all just need to train our palate to learn the core wine principles in the glass, to be able to assess wine quality apart from our personal likes and dislikes, and to be able to clearly recognize and put into context the important components of any wine.

Sonoma's Garagiste Festival is coming up next, on Feb. 15, and Solvang's will follow on April 17 and 18.

Put these festivals on your calendar and arrange a driver—even if you don't like wine tasting, you'd like going to a Garagiste. People with good taste are drinking like Vikings, and the winemakers' stories are a mixture of beautiful sonnets and punk rock ballads: layered, complex, and seriously cool. Δ

Flavor writer Beth Giuffre knows something seriously cool when she sees it. Send your thoughts to bgiuffre@newtimesslo.com.