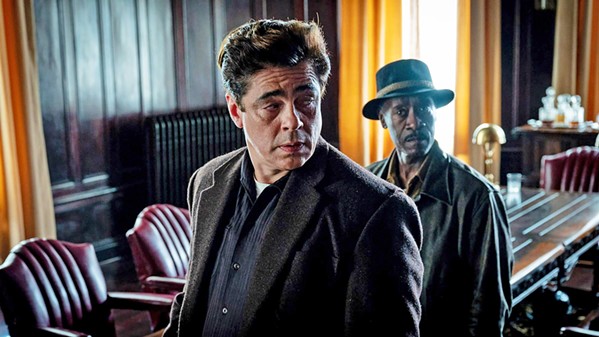 Steven Soderbergh (Erin Brockovich, Ocean's Eleven, Magic Mike) directs this crime drama that's got an amazing cast, a twisty-turny double- and triple-cross tale, and a decided film noir feel. At the heart of the story is career criminal Curt Goynes (Don Cheadle), who gets teamed up with a crew of unfamiliar lowlifes to pull off a mysterious job of stealing a document somehow related to the automotive industry.

When the job goes sideways, Goynes and Ronald Russo (Benicio Del Toro) try to chase the money up the food chain, discovering along the way who hired them and why they're expendable. Jon Hamm shows up as dirty fed Joe Finney, Ray Liotta is mid-level gangster Frank Capelli, and Brendan Fraser is Jones, another gangster with an anger problem. Best of all, there's an essential cameo by Matt Damon, which sets up the film's whole point about American corruption and greed.

Between the sets, the clothes, and the cars, it's a slick and engrossing period thriller, and the story will keep you guessing till the end. It may not be Soderbergh's best crime caper, which I'd say goes to Out of Sight (1998), but this is a gripping story with an unbeatable cast. (115 min.) Δ