No ticket, no problem 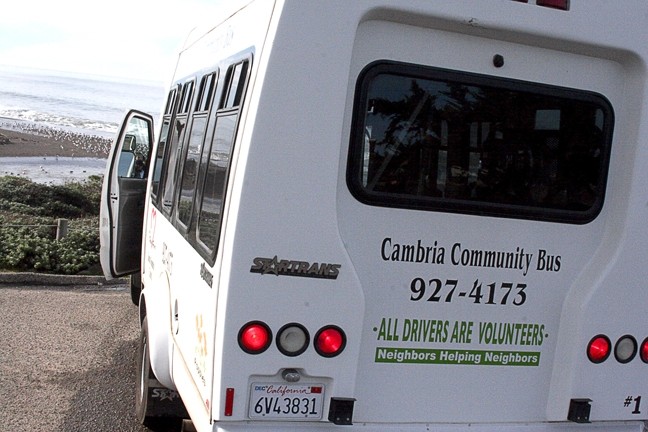 People often wonder what drives those who give their precious time to help others. In the case of the locals who command Cambria’s one-of-a-kind free bus service, they might wonder, instead: What drives them to drive those who can’t drive themselves?

At first light on a crisp January morning, Cambria resident Al Curtice pulled an eight-seat shuttle bus to the curb of the Rainbow Bean Coffee Co. and emerged for the day’s first cup of coffee. It was an unusually slow Thursday morning, so Curtice had time to sit down for a chat.

“Well, it’s a little hard to get up this early sometimes,” he admitted, “but other than that, doing this has been really rewarding.”

Curtice is one of 40 volunteer drivers who currently run the Cambria Community Bus, a service unique to the small community of roughly 6,000 residents, many of whom are long-since retired and live alone.

The free service offers transportation to residents 60 years or older and those who are either permanently or temporarily disabled. Drivers shuttle them to and from doctor’s appointments, on grocery runs, on library visits, on trips to town for lunch—pretty much wherever they need to go in town.

The bus runs throughout the Cambria area from 8 a.m. to 4:30 p.m. Monday through Friday. Of course, many necessities lie outside of Cambria. Every Tuesday, a second bus drives to San Luis Obispo with a stop in Morro Bay on the return trip. It also stops in Paso Robles on the fourth Thursday of every month.

How can a small community like Cambria afford to offer such a service?

“Well, the transportation industry has never been a money-maker,
and most of their budgets go to paying their drivers,” said longtime Bus Administrator Warren Gay. “But luckily for us, Cambria is a hotbed of volunteerism, and support for the bus is very much a community thing.”

Residents have been volunteering to drive for the program since it started in the early ’80s, Gay said. It currently operates on a razor-thin $42,170 annual budget, and only $29,300 of that is covered by reimbursement from the county and state under the Transportation Development Act, fuel subsidies, and community grants. That leaves a gap of almost $13,000 every year.

Even in tough economic times, the bus has been able to cover those costs solely through donations from the community and nonprofit groups such as Cambria Anonymous Neighbors.

“Once a year, we hold a fundraiser where we mail a donation request to every property owner in Cambria, and it’s impressive how consistent the support has been,” Gay said, adding some local residents and businesses make sizable donations, such as a recent $5,000 donation from Hearst Ranch.

Even with the money to keep the service going in hand, however, it’s a routine challenge to maintain a large enough active roster of volunteers to drive.

“About five to 10 days a year, we have to cancel service because there’s no driver,” Gay said.

At the moment, he added, there’s enough manpower to keep the bus going, but people come and people go frequently, and the service needs to maintain an influx of volunteers.

“I started about eight years ago after finding out from a friend who used to drive,” said the laid-back Curtice, a self-employed massage therapist who drives about once a month. “It’s easy. And it’s kind of one of those things where it’s its own reward.”

Cambria—a semi-secluded coastal community with winding roads and feisty weather—isn’t the kindest place to get around for those with disabilities. It’s not easy for anyone without a car, for that matter. But the bus drivers represent more than just a safe ride: They quickly get to know the riders and often provide a crucial dose of daily human interaction. As has been proven in the past, such interaction can mean a potentially life-saving check-up.

Gay remembered a particular incident with a rider: “One day I arrived to her home to pick her up, and there was no answer, but I heard a muffled ‘Help!’ coming from inside.”

Gay remembered climbing through an open bathroom window, falling into the bathtub, and finding her lying at the foot of the stairs with a broken ankle. He quickly called an ambulance.

“For some time after that, she would always say to me, ‘You saved my life,’” he said. “Well, I don’t know about that. I’m sure somebody would have stopped by if I wasn’t scheduled to pick her up that day, but it did feel pretty good.”

Curtice continued making the rounds with a New Times reporter in tow, picking up and dropping off a handful of bubbly seniors, known at that time of day as the “Lunch Bunch.” A quick-witted older gentleman carrying a cane—yet with a noticeable spring in his step—named Ed Pierce recounted how a few years ago he was bound to a wheelchair because of the medication he was on at the time.

“It was hard, but I remember the drivers, how nice they were. Some would walk me down to the beach in my chair,” said Pierce, a former dancer. “I’d have to say 75 percent of my recovery had to do with the people on this bus.”

“It’s a wonderful service—absolutely amazing,” said another rider, Irene, with fiery red hair. “We just can’t say enough about it."

Staff writer Matt Fountain gladly offers his seat to the elderly and disabled—or to pretty ladies carrying too many parcels. Contact him at mfountain@newtimesslo.com.