At The Spot, The Hairy Ape is a tragedy of the American worker 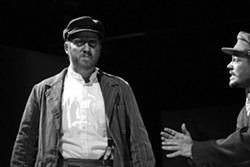 A description of Eugene O’Neill’s The Hairy Ape reads, “A Comedy of Ancient and Modern Life in Eight Scenes.” A comedy, I wonder, for whom? Certainly, the play’s main character, Yank, sees no humor in his dire situation. An engine stoker on board an ocean liner, Yank chafes at authority, resents the upper class, and refuses to join in the drunken conviviality of his fellow laborers. When Yank laughs, it is a harsh, mirthless sound that can only emerge from sheer desperation.

For the audience, The Hairy Ape is riveting, but you’d have to be disturbed to find it amusing. Indeed, if The Hairy Ape is a comedy, it’s a comedy only for the gods—those entities who’ve existed long enough to witness man’s descent from the primate and thus can laugh heartily at his failed attempts to distinguish himself therefrom.

O’Neill’s expressionist portrait of the American worker, originally produced in 1922, is currently being staged at The Spot in Arroyo Grande. The Spot’s artistic director, Jake McGuire, directs the show, in which he also stars as Yank, the titular ape.

Stocky of build, with eyes that brood from under layers of grime, McGuire is an excellent physical match for the role. In speech and mannerisms as well, McGuire meets the challenge. The Hairy Ape is the sort of play in which even the roughest characters are given nonchalantly exquisite dialogue that, cloaked under a layer of rough-and-tumble colloquialism, somehow slices at the heart of everything. Get a load of one of Yank’s chest-thumping early speeches (complete with O’Neill’s original spelling): “I’m at de bottom, get me! Dere ain’t nothin’ foither. I’m de end! I’m de start! I start somep’n and de woild moves! It—dat’s me!—de new dat’s moiderin’ de old! I’m de ting in coal dat makes it boin; I’m steam and oil for de engines; I’m de ting in noise dat makes yuh hear it; I’m smoke and express trains and steamers and factory whistles; I’m de ting in gold dat makes it money!”

In other words, you can’t really half-ass this stuff. Fortunately, McGuire dives headfirst into the role, alternating bravado with sulk, pacing the stage like Muhammad Ali in the boxing ring. There are plenty of other talents present, but the production owes its success to McGuire.

The story begins when a high-society girl named Mildred Douglas (Ellen Morgan Eves), curious about how the other half lives and suffering from the vague guilt of the wealthy (“I am sired by gold and damned by it,” she says) pays a visit to the ship’s stokehole. Confronted by the roaring, angry Yank, Mildred shrieks and recoils, calling him a “filthy beast.” Humiliated and angry, Yank is at first violent, hurling a shovel at the door as she flees. But as time wears on, Yank’s rage gradually dissolves into a kind of wounded brooding.

Nik Johnson, whom theatergoers may know from roles in Rent and The Three Musketeers at Cuesta, or from his performances with the Poetic Justice Project, is great in a supporting role as Long, a fellow stoker. Scrawny, defensive, yet frequently witty, with a Cockney singsong, Long is a source of wisdom on the rare occasions he isn’t provoking Yank mercilessly (and nearly getting punched in the face for it). It’s Long who explains that it’s not the rich girl Yank should be getting even with, but the class she represents. “I’m trying to awaken your class-consciousness,” he says, standing close to plant the words directly in Yank’s ear.

The ship docks, and Yank aimlessly wanders the streets of Manhattan: vaguely looking for the girl, with the intention to demand the meaning of her words, but also looking, with increasing disillusionment, for a place of belonging. Shunned by the upper class, beaten by a cop, and briefly imprisoned (The ape in a cage! Rest assured, O’Neill’s dialogue doesn’t let symbolism go overlooked), Yank grows steadily angrier, and the divide between him and respectable society grows deeper every day.

Several supporting actors take up multiple roles, among them PCPA grad Sean Peters and Poetic Justice alumni Jorge Manly Gil, Maux Samuel, and Nick Homick—who affects a near-perfect Irish brogue as Paddy, a fellow stoker with a knack for drunken lyricism. (“Oh, to be back in the fine days of my youth, ochone! Oh, there was fine beautiful ships them days—clippers wid tall masts touching the sky—fine strong men in them—men that was sons of the sea as if ‘twas the mother that bore them. Oh, the clean skins of them, and the clear eyes, the straight backs and full chests of them!”)

Though the show soars where it matters most, it’s not a perfect production. An early exchange on the ship’s deck between Mildred and her stodgy aunt (Aimee Evans), though probably meant to feel affected to some degree, reads as far too stagey.

At its best, the simple set design makes ingenious use of a small space, though there are a few places in which it attempts to evoke an environment beyond its capacity and comes off as a little silly. In the aforementioned scene on the deck of the ship, a sheet with an ocean scene painted on it doesn’t quite fill the background. The other scene I’m referring to takes place on Fifth Avenue, a place that generally requires more than a single storefront to be evoked.

Is it fair, though, to expect theater to compete with vibrant, teeming, full-sized life? Doesn’t the stage, with its limited, wooden world, feel like the right place to ponder the futility of human efforts; the minuteness of human understanding? After all, the characters we watch onstage never know whether they are in a comedy or a tragedy. But we do.

Arts Editor Anna Weltner knows that tragedy is when she cuts her finger. Contact her at aweltner@newtimesslo.com.

*This article was updated on Monday, June 17, 2013 to correct a spelling error.