An exhibit of younger artists brings a rowdier side to Paso

The artists of the Young Savages Collective aren’t necessarily young. Or savage. Or a collective. But that’s what happens when you try to put labels on an amorphous presence, one that shrinks away from every attempt at definition.

Allow me to start over on a less mysterious note. Neal Breton, New Times illustrator and perennial purveyor of art supplies, has curated a show of work by a group of local artists younger than 40, many of whom know each other, and cheekily titled it “Young Savages.”

The title makes more sense in the context of the venue; descending upon Paso Robles’ Studios on the Park, surrounded by the workspaces of established artists in their 50s and 60s, this ragtag group of graffiti artists, painters, printmakers, tattoo artists, ne’er-do-wells, um … parents, young professionals, and small business owners does start to seem pretty edgy, like they might stay out after midnight, or listen to the rock’n’roll. Woohoo!

Artists represented here include such beloved savages as Lena Rushing, Jeff Claassen, Dan Woehrle a.k.a. STENZSKULL, and Reid Cain (of Dr. Cain’s Comics and Games). Rushing’s Dichotomy II depicts a woman with hair like peppermint ribbon candy, her hand caressing the head of an eel. The woman’s likeness appears a second time, fainter: like a ghost, or trick of double-exposure. (Rushing is no stranger to the juxtaposition of beautiful women and exotic animals. Last fall, her show “Strong Women in Strange Company,” also at Studios on the Park, explored this theme as well.)

Rushing’s other piece in the exhibit, Young Savage, depicts a woman in side profile, the defiant flip of her unruly, grown-out black Mohawk mirroring the snarl on her lips. A crackle effect gives the painting, perhaps ironically, an aged appearance. 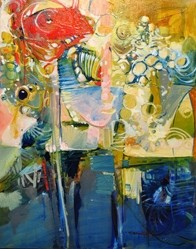 Breton himself is represented twice in the show: His acrylic paintings Skulk 2 and Skulk 3 depict a rabid gang of naked fox-women with knives. Their ears back, teeth bared in either warning or an expression of cruel mirth, their aggression seems fixed on something we can’t see. Only one, as though suddenly conscious of being watched, turns a wary blue eye to the viewer.

Foxes are, in fact, a recurring theme. Isaac Yorke’s acrylic painting of an enigmatic face, around which a sleek fox curls, tends to draw a second glance as viewers realize that’s what’s happening. Beth Reninger’s untitled mixed-media piece depicts a fox curling around a sort of gypsy woman’s shoulders, like a living scarf.

Chloe Parks’ untitled painting of a Barbie-like female figure trapped in a peanut butter and jelly sandwich says much with a simple, tragicomic image. Between the squares of white bread, two slender legs dangle pitifully, one having apparently lost a red stiletto.

With 26 artists represented, there’s far too much work to discuss here. From the graffiti-informed art of GWAP and Claassen to the beautiful—and not at all alike—abstract painting of Drew Davis and Nick Wilkinson, there are a variety of styles present.

The pieces vary greatly in their level of sophistication as well, and Breton seems conscious of this, placing the great, eye-catching ones near the front and working in a few more decorative selections toward the back of the space.

If there’s one unifying factor, it’s that it all feels young, evocative of an irreverent, almost offensive coolness. Most of the artwork looks like it wouldn’t be caught dead in a winery’s tasting room. “Young Savages” is therefore a very important show, one that, to North County viewers anyway, announces the existence of a talented, loosely associated group of younger local artists. ∆

Arts Editor Anna Weltner is waiting for a Jung Savages show. Contact her at aweltner@newtimesslo.com.