Ilya Naishuller (Hardcore Henry) directs this script by Derek Kolstad (John Wick) about seemingly mild-mannered family man Hutch Mansell (Bob Odenkirk), whose life is in a comfortable rut. Then one night two house invaders rob his family's home, imperiling his wife Becca (Connie Nielsen); son, Blake (Gage Munroe); and young daughter, Abby (Paisley Cadorath). Despite having the drop on one of the burglars, he lets them escape, bringing him shame. He was willing to let it go, but then he realized the thieves made off with Abby's kitty cat bracelet, and something inside him snaps, spurring him to draw on a secret past to seek justice. (92 min.) 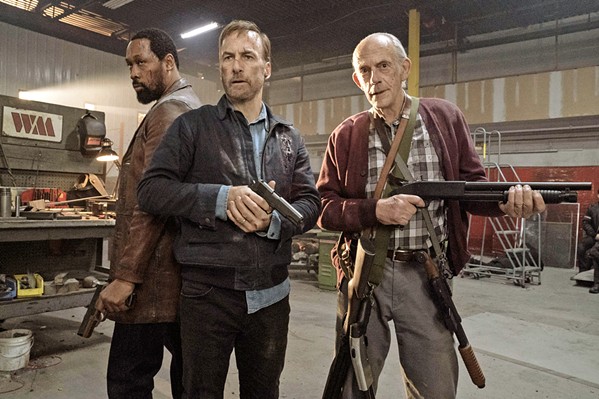 Glen This is pure male fantasy treading well-worn ground, but damn if it isn't a blast of energized mayhem! Hutch is a nobody with a dead-end job with his wife's father's business. His son thinks he's a coward, his wife is distant, and he gets no respect. However, like Bryan Mills (Liam Neeson) from Taken (2008), Hutch has a "very particular skill set," and like John Wick (Keanu Reeves) from the John Wick franchise, he's willing to come out of retirement and release his long-simmering anger to right an injustice. His return takes an unexpected turn when he inadvertently runs afoul of Russian mobster, Yulian Kuznetsov (Aleksey Serebryakov), a flamboyant psychopath who sends his goons to Hutch's house to attack him and his family. Bad idea, Yulian! Action-packed, laugh-out-loud funny, and with a brilliant comic turn by Christopher Lloyd as Hutch's ex-cop dad, David, Nobody is pure escapism. Odenkirk? Absolutely brilliant! He comes off as wholly unassuming, but when the punches and bullets fly, he's transformed into a credible action star! There's a sequel teed up here, and if they build it, I will come.

Anna Odenkirk is great in everything, and Nobody is no different. This is so clearly designed to sell to every middle-aged man with a vigilante justice fantasy, but as someone with none of those characteristics, I can say with confidence this is fun for everyone. Do I love that the writer decided to use the well-worn stereotype of a Russian mobster as the No. 1 villain? No, but it gets the job done and sets Hutch up for a takedown with gusto. The film starts out on repeat—every day the same—alarm, coffee, tedious work, run, etc. It's clear that Hutch may love his family, but he isn't loving life. We learn he's a veteran when his son begrudgingly asks to interview him for a school project, but even his service doesn't earn him any accolades—he was "just an auditor." What that actually entails ends up being a whole lot more than it sounds like, and Hutch's badass skills have somehow stayed finely tuned over the years. He talks to someone through his office radio, but who it is we don't know. His dad is snoozing through the end of his life in a retirement home, watching John Wayne and getting occasional visits from his son. It's just a dull existence all around, but not for long.

Glen Though there's not much of a plot, the script manages to connect some emotional dots, such as a rekindling of Hutch's romance with Becca and a reconnection to his long-repressed manhood. He missed the violence, and even when he's taking a beating, you can see Hutch is loving every minute of the life-or-death thrill of it. There's also a terrific scene where he explains why he left his old life to start a family, and it's very sweet. Go for the action and laughs, but don't be surprised if you find a little heart and soul among the blood and guts. The film feels considerably shorter than its 92-minute runtime, mainly because of the brisk pacing and joyous pandemonium. However, the filmmakers know when to slow it down enough for the audience to catch its breath and for Hutch to expound on his transformation. In between, its pedal-to-the-metal craziness, and I loved it. I am, sadly, the film's core demographic.

Anna Hey, don't get down on yourself. There's a reason the film got made, and we all have to appreciate when it feels like something is tailored for us, even if that means you have to confront the fact that you're a regular dude and not a super spy action hero. That's why we have the cinema, so we can dream! Odenkirk really makes the film. This is Hutch's story, and I'm not going to lie: It's fun to watch someone you don't think of as an action star kick some major ass. He's vicious and cunning, and I'm betting I wasn't the only one in the audience wowed by a funny man who took a turn as an action movie hero and nailed it. Maybe it's because I'm a 36-year-old married mom, but I'm loving a star being a guy who can kick ass and makes lasagna for his family. More of this please! I'm excited for a sequel—mindless fun has never been so good. Δ