Andrews spoke to New Times via phone while traveling between gigs on the East Coast, and the most important thing you need to know about him is he talks fast. Really fast. He’s also not interested in talking about what he’s not interested in talking about. Before we even got him on the phone, his press representative sent an email saying he would only speak about his music and the Live Oak Music Festival, and not about his recent “troubles.”

Naturally, I had to look that up. In 2012, Andrews pleaded guilty to domestic violence for incidents between him and an off-and-on girlfriend, much lower than the original charge of attempted murder, and he went through a couple of drug rehab programs. In 2013, he released his acclaimed album Redemption, and by all accounts, the musician has turned his life around. He’s also still on probation.

Because he’s a native New Orleans resident from a family with deep roots in Treme (his cousins are trumpeter James Andrews and Troy ‘Trombone Shorty’ Andrews), and he’s played with the New Birth and Lil’ Rascals brass bands, I wanted to know if he thought New Orleans and its music scene had bounced back from Katrina.

Um. OK. Was he excited to be coming to California?

“Damn right. Can’t wait to be coming to a new market. We played a few shows out there in clubs for 200 to 300 people, and I love looking out and seeing people singing the lyrics back to me. I appreciate the love.”

So I tell him he’ll be playing in front of more like 3,000 people at Live Oak.

I ask about Redemption. What does the record represent to him?

“We’re in the very early stages of recording the next one. Redemption took two years, and this one will too. I don’t like to rush things. It [Redemption] was a very personal record for me, and most songs are self-explanatory. It was a dark time in my life, but I’m really proud of the people I worked with. To write that kind of record, opening up your personal life to the world, I was just opening up about what happened and was able to tell my life story and put it out there for people who are hurting. I look forward to seeing how far that project can go.”

I also asked about his voice, this deep, rumbling thing. Is it a style he cultivated or is just the way he sings?

“Singing over those second-line parades all those years, singing over the crowds, you’ve got to develop a big voice, and being a really heavy smoker … I like that gravelly sound.”

He’s also done a bit of acting in Treme, the HBO drama of post-Katrina New Orleans. Is that something he’s interested in pursuing?

“No, I don’t like acting. I don’t like sitting in a trailer with a bunch of pretentious assholes, and I was very offended by Wendell Pierce [he played Antoine Batiste] and his portrayal of trombone players. He’s a piece of shit, and you can quote me on that. It’s just an awful fucking performance, embarrassing and fucked up. He doesn’t understand trombone players, how we dress or carry ourselves, walking around with his horn out of the case.”

Yikes! Tell us what you really think. I tell him I’m looking forward to seeing his show and bid him adieu, knowing full well his night of New Orleans style jazz will be as incendiary as his personality.

Visit liveoakfest.org to reserve your full festival camping pass or day pass. This show’s going to be one for the ages!

A couple of months ago, I got an email from Roe Pressley, a local writer, DJ, and musician, who asked if New Times would be interested in him interviewing Peter Murphy and writing about his upcoming Good Medicine Presents show on Saturday, June 13 (7:30 p.m.; all ages; $22 presale or $25 at the door) at SLO Brew. As a big fan of Tom Sawyer’s ability to get someone else to paint Aunt Polly’s fence, I agreed. Here’s Roe’s contribution: 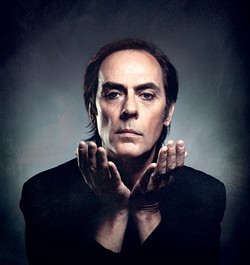 Two decades before Marilyn Manson’s hodgepodge of heavy metal, industrial and glam rock aesthetics birthed a new breed of goth kids; post-punk bands like Joy Division, Siouxsie and the Banshees, and The Cure engineered a new sound that collectively became known as gothic rock. But no band is as ubiquitous in the subculture as Bauhaus. They’re a dark reflection of The Beatles, influencing artists from Kurt Cobain to Trent Reznor to Neil Gaiman. They’re the go-to icon when satires like Saturday Night Live and South Park spoof goth culture. And their flagship anthem, “Bela Lugosi’s Dead,” has been performed by the likes of Billy Corgan, Massive Attack, and Chris Cornell.

We spoke via Skype from his home in Istanbul about his latest solo endeavor, Lion, as well as the current state of Bauhaus and his relationship with one of his biggest influences. Bauhaus’ 1982 cover of David Bowie’s “Ziggy Stardust” became the band’s biggest hit in the charts, but the band originally had reservations about covering his material at all.

“It was sacrilege,” Murphy said. “Ziggy Stardust was dead. [Bowie] killed him. But every night, I got to become Ziggy Stardust for three minutes and it was fantastic.”

Murphy claims Bowie confided that Murphy “was the better singer.” But will we ever see a Bowie/Murphy collaboration?

“I’ve only met him once,” Murphy said, referring to the 1983 vampire film The Hunger, in which the band had a cameo. “I wouldn’t claim to know him. If I met him again, I’d like to give him a handful of stardust, or gold dust, and say, ‘Here, you can have this back.’”

I asked Murphy about the significance of the titular lion on his latest album. He told me an anecdote about a man who saw a beautiful drawing of a lion on the wall of a tattoo shop and asked to be inked with it. The artist warned the man that the design was something special just for him, and he didn’t give it out, but the customer insisted on it. The man couldn’t withstand the pain and ended up with only the lion’s tail on his skin. This is the story told in the album’s title track, but I wondered if it wasn’t also an allegory for the entire album.

In 2005, Murphy’s final words from the Coachella stage, “Now you can say you were there,” caused speculation that it would be the last time the band played together. Not so, Murphy said.

Murphy’s respect for his former bandmates is evident, particularly with guitarist Daniel Ash, whose influence on rock music the singer compared to Jimi Hendrix. He did not rule out future reunions. But isn’t gothic rock a dead genre?

Peter Murphy performs Saturday, June 13. Details about the VIP meet-and-greet are on his Facebook page.

Jude Johnstone is saying adios to the Central Coast. After years of writing music for the likes of Johnny Cash, Emmylou Harris, Trisha Yearwood, and Bonnie Raitt from her Cambria home, recent changes in the music business have made it too difficult to survive so far from country music’s epicenter, so she’s moving to Nashville. Before she departs, she’ll play two more local shows. 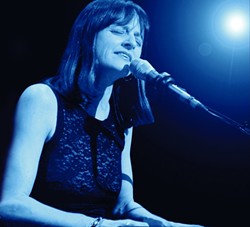 She’ll be joined by Bob Liepman (cello and mandocello) and Sal Garza (violin) at both shows, and special guest Sam Swinson will play an opening set at the Steynberg show.

Of Johnstone, Bonnie Raitt said, “Her fertility, in regards to songwriting, is truly awe inspiring.”

Said Johnstone in press materials, “I’ve made my home here on the Central Coast, raised my daughters here, and played music here for 23 years. It’s bittersweet leaving, but my music biz friends are mostly in Nashville so it seems the right place for me to go and get back to work. I had a music publishing deal since I was 23 years old, which allowed me to be here all this time, but the Internet changed that a couple years ago. So now I gotta start again fresh and be where I can network with my people and drum up some business to stay alive. I love this place and the people in it. Will miss it forever!”

Moonshiner Collective brings its indie rock and folk sounds to Tooth and Nail Winery this Friday, June 12, for another free Good Medicine Presents concert from 5 to 9 p.m.

This Frontier Needs Heroes brings their Americana roots and indie rock music to Bang the Drum Brewery this Monday, June 15, at 6:30 p.m.

Time to submit to the New Times Music Awards!

All right, all you talented musicians and bands, it’s time to once again submit your music to the New Times Music Awards, either online or by filling out the entry form on page 41 and bringing it to the office.

Entries are due by Thursday, July 2, at 5 p.m. ($10 per song entry fee). Readers Choice voting runs from July 30 through Aug. 13. The awards and showcase happens Friday, Sept. 25, at the Fremont Theater, and musicians must be able to perform that evening to be eligible to win.

Good luck, and bring on the music!