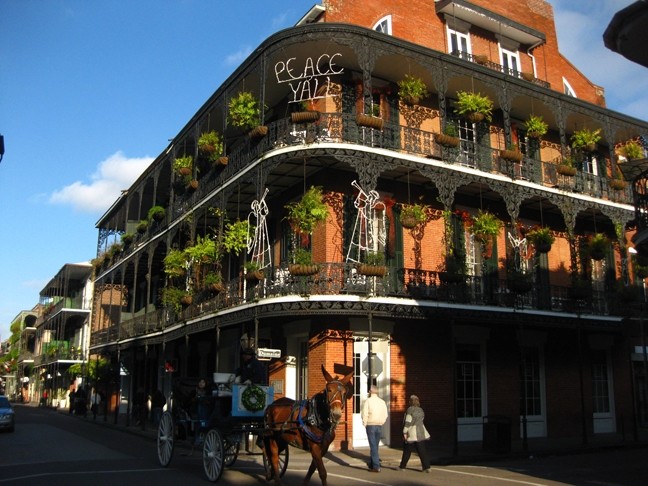 Happy New Year, y’all, and hello from the Big Easy! Since I am visiting my family in Mandeville, Louisiana, just north of New Orleans, it only seemed right to take in a band in the city and report back to our loyal readers.

A few days before Christmas, my family and I headed across the Lake Pontchartrain Causeway in search of music in the French Quarter. After an amusing but uninspired trek down Bourbon Street in some downright bone-chilling weather, my nephew Michael, schooled in the ways of New Orleans nightlife, took us to Frenchmen Street, the heart of the hip and happening neighborhood called Faubourg Marigny (Pronounced “muh-REEN-ee”). Frenchmen Street is, according to locals, what Bourbon Street used to be. While Bourbon Street has become better known for To-Go Daiquiris, overpriced T-shirts, and strip clubs than for music, Frenchmen Street has taken its place as a cultural mecca and the place to see live bands.

Please note: This is no knock against the French Quarter. Au contraire, cher! The Quarter is still a gorgeous and full-flavored blend of rich food, colorful people, and beautiful architecture imbued with the city’s lifeblood and history. And Rue Bourbon is still a fine place to party.

But if it’s music you want, head one suburb downriver to the Marigny. Music rules here, whether in the bars or in the streets. On our way back to the car, as we huddled in a group against the cold, we passed a brass ensemble of at least six players performing on a corner for change while people danced in the street. These people know how to keep warm.

New Orleans lives and eats and breathes and bleeds music, and nobody, generally speaking, seems to be in it for the money. Most of the clubs we saw on Frenchmen Street had no cover, and the hat was passed during breaks to compensate the band.

The music that dominates here has a wonderful timeliness, as well. There is a deep enduring love for traditional jazz and blues; trumpets, accordions, and tubas are as common on these stages as electric guitars, if not more.

Back to our night on Frenchmen Street. By some happy voodoo magic, we wandered into The Maison and a set by the glorious Aurora Nealand and the Royal Roses. The band specializes in Sidney Bechet-influenced traditional jazz, featuring Nealand on vocals and soprano sax, David Boswell on trumpet, Matt Bell on vocals and guitar, Matthew Prine on Sousaphone, and Benji Bohannon on drums. 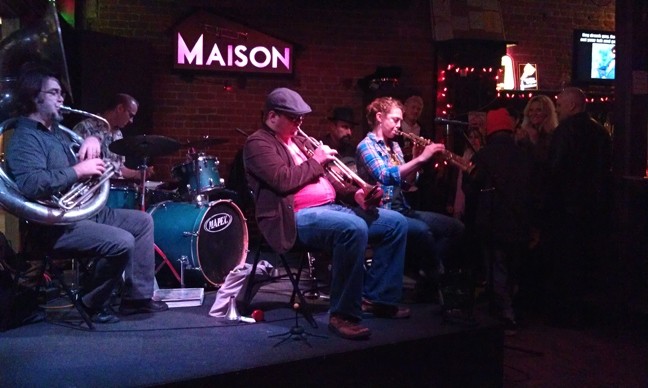 I spoke with Boswell about what drew him to traditional jazz, and he succinctly described what fills up the clubs on Frenchmen Street every night: “It’s fun. It’s very danceable. The melodies make sense, the harmonies make sense, the rhythms make sense, and people really respond to it.”

Apparently fearless leader Aurora Nealand is a bit of a musical chameleon, working as a bandleader for both the Royal Roses and New Orleans premier rockabilly band Rory Danger and the Danger Dangers, along with being a composer, performer, and improviser in other projects. She plays with a diverse array of bands, including the Panorama Brass Band and the Panorama Jazz Band (see panoramajazzband.com for a sweet performance of “Trombon Hora” and you’ll be hooked); the lindy hop scene’s favorite, the Gordon Webster Band, and the winner for biggest band name mouthful, Why Are We Building Such a Big Ship, an experimental soundscape producing hauntingly beautiful compositions that MOJO Magazine called “one of the most curious and original bands in America.”

As if that isn’t enough, there is also The Monocle, Nealand’s project of original compositions and performance pieces.  She sings, plays saxophone, clarinet, accordion, banjo, and experiments with just about every musical genre you can think of. She has also appeared frequently as herself in HBO TV’s love song to post-Katrina New Orleans, Treme.

Check the website of this fascinating artist (auroranealand.com) for updates on shows and the Roses’ upcoming album.

In short, if you ever have a chance to see Aurora Nealand, whether with the Royal Roses or in any other incarnation, take it.

What the world needs now

Smooth jazz chanteuse Normandie Wilson will perform songs from her new album “Geography and Other Problems” on Wednesday, Jan. 8 at Linnaea’s Café. This San Diego-based singer/songwriter performs her own brand of lounge music that shows influences by Burt Bacharach and the soft romantic crooners of the ‘60s. As with all shows at SLO’s quintessential coffee house, cover charge is “pass the hat” only. So drop a few bucks in as it passes for this Burt Bacharach-inspired artist!

The following is addressed specifically to those over 40. Let’s go back in time, friends, to the 1970s. Your hair was long and silky and possibly permed, and your bottoms were bell. If you were cool enough, you sported a large long-handled comb in the back pocket of your patchwork jeans.

And you were obsessed with The Who. From the ‘60s anthem “My Generation” forward, Daltry, Townshend, Moon, and Entwistle represented everything a rock band was supposed to be—rebellious, sex-obsessed, loud, and majestically talented.

You can relive that magic, if just for a night, by seeing The Who Show, tribute band extraordinaire, at SLO Brew on Saturday, Jan. 11. Southern California’s longest running Who tribute band has actually been sanctioned by Roger Daltry himself, who said of their production of Quadrophenia, “Job very well done. You’ve really done your homework,” according to the band’s website.

So your teenage wasteland was more than 30 years ago—it still counts. Remember: Rock is dead, they say/Long live rock. Tickets to relive your youth are a mere $15 in advance and $17 at the door. See slobrewingco.com for details.

Back Bay Betty calls their particular brand of party music “funky blues for your dancin’ shoes,” and will make good on that promise at D’Anbino Cellars on Saturday, Jan. 4 at 8 p.m. With a combination of originals and classic covers, BBB, led by singer Linda Martin, provides the sounds while D’Anbino Winery provides world-class wines. Tickets are $10 for the show, with wine available for purchase. Visit backbaybetty.com or danbino.com for more details.

Brandon Swift started his musical career at the age of 17, when he began playing dive bars deep in the swamps of South Georgia and Northern Florida with his father, Mark Swift. Over the course of his musical career, he has shared stages with acts as diverse as Vanilla Ice and Dave Hlubek of Molly Hatchet. Cut to 2013, and he’s blues-rocking the Central Coast. According to his website, brandonswift.yovigo.com, “Swift is touring the United States in a converted van with living quarters and a solar panel to play for anyone who will listen and live each day as the gift it is.” Reward that awesome message by seeing Swift at the Frog and Peach on Saturday, Jan. 4. Call 595-FROG for ticket prices and more information.

The playa from Playa

Hip-hop and reggae fusion artist Sozay comes to the Frog and Peach Pub on Friday, Jan. 3. While this Playa del Rey-based performer’s sound is unique, it does bring Sublime and Slightly Stoopid to mind, with clever lyrics and solid beats. His latest album These Old Shoes features A-list guests like Duckie Simpson of the Grammy-winning group Black Uhuru. Call 595-FROG for ticket prices and more information.

Songwriters At Play, which has been showcasing excellent Central Coast artists for three years now, starts the year out right with an acoustic music concert featuring Kenny Blackwell and Dorian Michael and Amber Cross.

Say you’re Kenny Blackwell and you’re a master at the mandolin. You’ve long been a part of the famed Laurel Canyon Ramblers, and are known as a virtuosic bluegrass player, when along comes an opportunity to play in a completely different style. Enter guitarist Dorian Michael, who had played honky-tonk, blues, jazz, and rock, but who was looking for a musical partner with a background in roots music. The inventive acoustic duo Kenny Blackwell and Dorian Michael was born!

Amber Cross is a singer/songwriter/guitarist best known as part of the The Old Time Fiddle and Banjo Show. Her sound is a mixture of old-timey country, bluegrass, gospel—all of it with a hint of Appalachian mountain music thrown in. Cross also happens to have an incredible collection of flannel shirts, which she sells while touring.

See both groups on Friday, Jan. 10 at D’Anbino Cellars in Paso Robles. Tickets are $10 and show begins at 7 p.m. Get more info at songwritersatplay.com.

When the artist goes by the name Phil Lee, The Mighty King of Love, you already know he’s got chutzpah, and this blues guitarist/drummer/general muckraker hailing from Durham, North Carolina, has claimed the Central Coast as his own. He’ll be the featured performer at Vines on the Marycrest in Paso Robles on Saturday, Jan. 4 from 1 p.m. to 4 p.m. His special guests will include Holly Ann Phillips, Ish Moreno, Steven Paul, and Christine Rogers. This show is free. See songwritersatplay.com for more info.

Gypsy-jazz guitarists Nathan Rivera & Jessie Andra Smith will present an evening of folk-blues-pop originals on Thursday, Jan. 2 at the Shell Café in Pismo Beach.  Billing themselves as “2 Resonator Guitars plus 1 Accordion plus 2 Voices equals 1 Unforgettable Show,” the duo comes to Pismo by way of Southern California. Their special guests will be Brent Dannells, Lost Hills, Chris Broemmelsiek, and the local duo called Panga. There is no cover charge, but donations in the hat are strongly encouraged! The show starts at 6:30 p.m.

Victoria Dale is covering for Glen Starkey while he’s on vacation. Send your music news to gstarkey@newtimesslo.com.

Note: This article was updated on Monday, Jan. 6 to correct two band members' names (from Aurora Nealand and the Royal Roses) that were misattributed in the original article.