Nom Nom Nom The Good Food Truck isn’t actually a truck. Covered in chalkboard paint and colorful customer doodles, the compact two-wheeler—slyly named after the sound one makes when consuming a most masterful meal—is more like the little food trailer that could. Since opening the mobile business last year, Paso Robles husband and wife team Ryan and Kate Swarthout have proven themselves with an ambitious menu that rivals the big boys.

“The pork sandwich hits all of the right comfort levels at once,” Ryan said. “On a cold winter night, I would probably serve it with a cup of hot tomato soup and just watch heads explode.”

If I were to consume the aforementioned meal around 1 a.m. after a brisk night of country music dancin’ at Pine Street Saloon, I, too, would be in some sort of (literal) hog heaven. In a county where food trucks are increasingly showing up at places of business, private parties, weddings, and community events, Nom Nom Nom’s nimble frame and big flavor pack a memorable punch.

“We get a lot of people poking their heads in here. Customers are completely amazed at the food we’re putting out of this little trailer,” Ryan said with a chuckle. “People usually walk about 5 feet away and start eating, then turn around with a mouthful of food and give us a thumbs up. We love getting that instant feedback.” 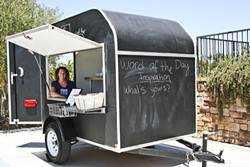 Well-trained and traveled, the current Executive Chef and General Manager of Paso-based Second Press restaurant is no stranger to serving satisfied diners. Over the years, the chef has loaned his expertise to local haunts like Estrella, Robert’s, JUSTIN Vineyard & Winery, and The Gardens at Avila, among others.

Now, Ryan is set on this new challenge, and indeed running a mobile food business is demanding work. First, the chef didn’t buy a factory-fresh mobile food unit with all the necessary appliances, instead opting to build and install his own, customized fixtures. Second, the couple has yet to obtain a generator, which means plugging in when and where they can. Third, due to the trailer’s slight size, much of the food must be prepped offsite. Getting the word out is another immeasurably important task. Food trucks are only allowed to operate on private property in Paso Robles, making up-to-date Facebook posts vital. A quick social media scan of the business’ wall reveals post after post specifying just when and where folks can get their next fix.

“It really takes Kate and myself working together to make it all happen,” Ryan said. Kate, a stay-at-home mom to their 9-year-old daughter and 13-year-old son, is quite the culinary creative in her own right.

On a recent stop at Mitchella Winery in Eastside Paso Robles, I became happily acquainted with her all-cold menu featuring a unique plethora of deviled eggs, Spanish style panko-crusted fried chicken with quinoa salad (so substantial yet refreshing), and prosciutto mozzarella wrap drizzled with aged balsamic, among other nibbles.

According to Kate, changing the menu depending on the venue is necessary in order to satisfy a range of distinctive stomach gurgles. She’s probably right: When you’re sipping on a glass of cabernet sauvignon in the sizzling Paso sun, you probably don’t want a giant, beefy burger (although the truck does serve its fair share of burgers at after-hours bars).

“We create a unique menu for every place we go, and wherever we serve, people love to write or draw pictures on the trailer,” Kate said. “It’s fun, a way for people to make the experience their own.”

A mason jar brimming with colored chalk beckons patrons to draw stick figures and masterpieces, announce funky roller derby names, or proclaim an undying love for old high school sweethearts. Kate’s multitalented hubby also gets a chance to play, although he tends to do that behind the tiny window.

“Being the smallest food truck out there, I find it really interesting to see how so many local mobile kitchens are doing so many new things, from cooking everything with bacon to doing wood fired pizza and beyond,” Ryan said. “Our culinary world is really evolving, and using my culinary background, I want to continue to push Nom Nom Nom further.”

If you ask the chef, a sense of “ordering schizophrenia” is natural. When in doubt, go for the pulled pork grilled cheese sandwich.