Nomadland explores the nomad culture, a side of homelessness not often seen

Chloé Zhao (The Rider) directs and adapts for the screen Jessica Bruder's 2017 nonfiction book Nomadland: Surviving America in the Twenty-First Century, about modern-day "houseless" people. The central character is Fern (Frances McDormand), who lost everything in the Great Recession. She's now an itinerant worker living out of her van, who travels the West in search of a way to make a living. The film also features David Strathairn as Dave, as well as a cast of real-life nomads playing fictional versions of themselves. It's the Golden Globe winner for Best Motion Picture-Drama and Best Director and is also nominated for six Academy Awards including Best Picture, Best Actress, Best Director, Best Adapted Screenplay, Best Film Editing, and Best Cinematographer. (92 min.) 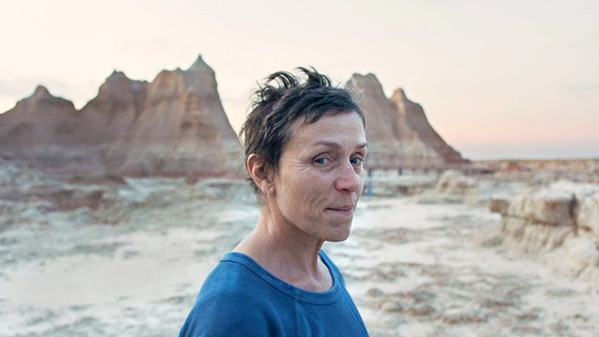 Glen Tender and elegiac, Nomadland is about an unseen side of homelessness. It's also about community, resilience, and freedom. Fern recently lost her husband as well as her blue collar job at a gypsum plant in Nevada after working there for years. Her town is essentially dying, so she sells off her belongings and buys a van, first taking a seasonal job at an Amazon fulfillment center. There she meets other itinerant workers and hears about a desert rendezvous organized by Bob Wills (playing himself), an advocate for the "houseless." She reluctantly attends and finds community and learns survival skills for life on the road. What follows is an exploration of the relationships she forms as well as the events that might seem minor to most, such as a flat tire, but are monumental hurdles to Fern, who has little money and few resources. The film is less about plot than it is about feeling. These are the invisible people struggling to get by, and the film is a meandering poem to their spirit.

Anna McDormand is once again at her best as the enigmatic and quiet Fern, whose life is packed into a van and who has to figure out her place in this rolling world. We heard an interview on NPR with some real houseless people who spend their lives on the road, and the hurdles Fern faces are all too real. The film is atmospheric, the sweeping desert is beautiful and lonely, and you are going to have to be OK with quiet with Nomadland. The film gives McDormand a lot to do with her character, but this one is introspective. The cast of real-life travelers adds authenticity, and the slog of the day-to-day life is never glamorized for us. It's been described as "slow paced," which I can't argue with, but for me it takes the time it needs, and the small story is needled out as we watch McDormand do her fine work with the character.

Glen The search for authenticity is Zhao's raison d'être. Her last film, The Rider, starred real-life cowboy Brady Jandreau, as well as his family members and other Lakota Sioux of the Pine Ridge Reservation playing fictionalized versions of themselves, and was based on real events. Somehow, Zhao manages to get effective performances out of these non-actors, and the realism it lends the film makes the experience even more immersive. This is also a really beautiful film, as was The Rider. Both share the same director of photography, Joshua James Richard, who also worked on Zhao's feature-length debut, Songs My Brothers Taught Me (2015). As noted, not much happens in Nomadland, and its open ending suggests Fern's life on the road will continue on. It's a slice of life most of us will never experience or would even want to—a life of grinding poverty and little stability—and yet Fern and her fellow nomads never lose their humanity. How could they? It's about all they've got.

Anna I loved The Rider as well. Zhao obviously has a talent for blending fiction with realism, and Nomadland is another great example of that. I had never thought about what life on the road would look like in reality—taking physically taxing jobs to earn a few bucks, enough to help you move on to the next spot but never enough to afford you a whole lot of comfort. It's something most of us will never experience or would even consider for our lives, but there're people out there doing it every day, and McDormand's Fern is a testament to the tenacity it takes to survive. There's no guarantee that the car is going to start or there will be work at the next stop, but you just have to keep going no matter what comes at you. Her life has been packed away into the confines of her van, making her face her utter aloneness. Be patient with this one; like we said, it doesn't rush at all but there is a lot to ruminate on, and both the director and lead do a wonderful job of weaving this story. It's definitely worth a watch. Δ