A nonprofit housing developer with hopes to build a tiny home village in Los Osos was hit with a stop work order last month after it cleared the potential site—a wetland, according to San Luis Obispo County—of trees and vegetation. 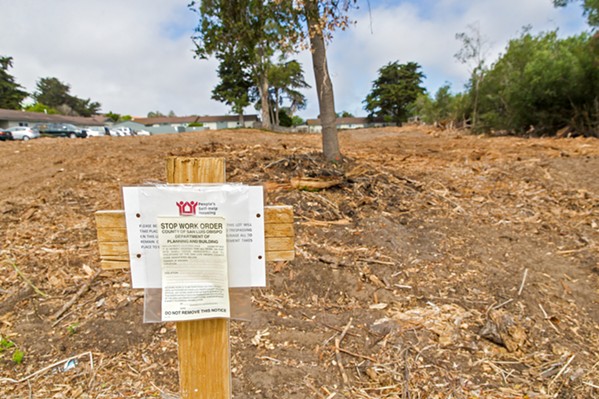 Peoples' Self-Help Housing cleared the vacant 1.3-acre parcel at the intersection of Los Olivos Avenue and Mountain View Drive in mid-June, after Cal Fire said the vegetation posed a fire hazard, according to the nonprofit's CEO Ken Trigueiro.

"Cal Fire contacted us in February and said the site is not in compliance with the fuel fire hazard abatement ordinance," Trigueiro said. "Over time, we came up with a plan and hired a landscape contractor. There were some dead trees and things falling over, and they chipped that all up."

But on June 24, a San Luis Obispo County code enforcement officer posted a stop work order at the property—noting a violation of "unauthorized work in [a] designated wetland/coastal zone."

Despite being surrounded by roads and homes, the parcel is considered part of a wetland, according to SLO County Code Enforcement Supervisor Jill Coomer, and the amount of work done exceeded what's allowed without a permit. Coomer said that leftover tree debris also posed a drainage issue.

Trigueiro said that his contractor had completely finished the work prior to the county's notice, and he is now in discussions with officials about what the problems and solutions are.

"They've been really helpful to try to figure out what this is about," he said.

Peoples' Self-Help Housing has bigger plans for the parcel: Last month, it applied to the county for a state homelessness grant to build up to 24 tiny homes for the locally unhoused. The idea emerged out of recent discussions at the Los Osos Community Advisory Council, specifically a subcommittee focused on homelessness.

"That's exactly what we've been trying to figure out," Trigueiro said. "We've been talking with numerous county staff over a ton of different departments."

A tiny home village project would run into several hurdles beyond the recently raised wetland issue, which Trigueiro said he plans to hire an environmental consultant to study further.

All new development in Los Osos is on pause until the California Coastal Commission approves SLO County's new Los Osos Community Plan. Then, development is complicated by a restrictive growth ordinance based on water availability—though a tiny home project could be exempted as affordable housing.

"We're in the feasibility stage of what could we do on that site," Trigueiro said.

Historically, the lot in question served as a septic leach field for an adjacent apartment complex, which is also owned by Peoples' Self-Help Housing. Trigueiro said that putting a tiny home project next to apartments it already owns makes a lot of sense.

Caroline Hall, who's on the board of Los Osos Cares and served on the community subcommittee on homelessness, said the tiny home proposal gets around the biggest challenge of finding available land to provide shelter and services to the unhoused. She said the county is likely to come back with grantee recommendations later this summer.

"We feel as though there is a lot of potential," Hall said. Δ