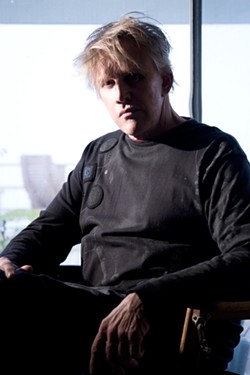 What are the two most frightening words in Hollywood? OK, other than “casting couch.” OK, other than “no trailer.” OK, other than … look, never mind! They’re “Gary Busey.” That’s all it took to excite me about the Paso Robles Digital Film Festival (Nov. 20-24). Seriously, the man is a badass. His teeth are like towering Roman columns, Stonehenge after braces, the world’s largest keyboard with no black keys. Then he’s got that crazy look in his eyes. The man is a specter.

He fractured his skull in 1988 in a motorcycle accident sans helmet and lived! He played the last character killed on Gunsmoke, and he played drums professionally, including with Leon Russell. And the last two were before he was even famous!

Big Wednesday goes without saying (as surfin’ bruiser Leroy Smith). Add as a co-star Dirty Little Billy, Thunderbolt and Lightfoot, and A Star is Born, and as a star The Buddy Holly Story (Oscar nomination!), Barbarosa (with Willie Nelson!), Lethal Weapon, Point Break, Under Siege (in drag!), The Firm, Lost Highway (David Lynch!), and his last not-shitty role Fear and Loathing in Las Vegas, and you’ve got a formidable career.

He’s more awesomely self-deprecating than Shatner! Tom Cruise’s clinical-grade batshit craziness seems positively well adjusted by comparison. He sort of mauled Jennifer Garner at the Academy Awards and got kicked out for it. Busey does what you dream of doing when you’re blackout drunk! And he’s probably totally sober (Hey, you got the balls to ask? Didn’t think so!).

If Busey’s ever said “no” to a job, there’s certainly no evidence of it in his 140-plus film career! That’s an average of more than three films a year since his first role in 1968 as an uncredited extra in the Oscar-nominated Shelly Winters/ Richard Pryor vehicle Wild in the Streets (No, seriously. Look it up.)

Sure, the last decade or so has been a little dry: showy bit parts in B-movies, videogame voice work, and reality TV (A rehab show as part of a “mentoring team?” Mmm … OK, if you say so). But when I look at Busey even today, I see that goofy, good-natured, gangly guy in Foolin’ Around, when he played a hayseed who falls for a rich girl (Annette O’Toole) and must compete in the snob world to win her hand. After all, Busey has always seemed like an alien: hugely out of place, yet nobly struggling to “be” in our world.

And what a struggle! Check out some of his clips on youtube.com and prepare yourself for the wisdom! Buseyisms! BIBLE stands for Basic Info Before Leaving Earth. He’s got a million of ’em!

He’ll be a special guest during the Saturday, Nov. 21, 2 to 4:30 p.m. “Doo Wop Saturday” at Sylvester Winery (5115 Buena Vista Dr.), and I’ll be there to catch the shenanigans. But that’s barely scratching the surface of this film fest.

Yes, there will be plenty of films screened, including four world premiers, but organizer Benford Standley also has music in mind, so you can see legendary producer Joel Diamond receive a Music in Media Award, and hear Dave Somerville (co-founding member of the Diamonds) emcee the “Doo-Wop Saturday” with Busey, Chris Montez, Sonny Curtis, and more. If you get there on Friday, Nov. 20, you can hear music with the Jack Tempchin Band and special guests, as well as actor/activist/musician Max Gail, comedian Charlie Hill, Steve Miller guitarist Kenny Lewis, John Andrew Parks, and more still. Sunday, Nov. 22 is Help the Kids Day, which is why actress and child advocate Kathleen Quinlan is coming. Look, it’s all on the website.

But can any of that compare to the awesomosity of Gary Busey!

OK, maybe you’re concerned he’s all washed up. Perez Hilton, says so, after all. But I say Perez Hilton is a loveless douche bag! Busey claims he’s been sober for years, a cleaning up prompted by an in-the-gutter lowpoint: snorting cocaine off his dog. Apparently, Fido rolled in his remaining supplies.

Access Hollywood quoted Busey as saying, “I went in like a crop duster with my nose flying first and snorted the cocaine off the dog. You get a little bugs, you get little hairs, you get grease and goo from the ground; it’s not at all a healthy thing to do. But when you’re an addict, you don’t think of health, you think about destruction of yourself unconsciously.”

He may be clean and sober, but the insanity of Gary Busey lives on! If there’s a better reason to go to “Doo Wop Saturday,” I don’t know what it is. GARY stands for Gargantuanly Awesome Rebel Yell!