The future landscape of animal services in San Luis Obispo County still hangs in the balance, as Paso Robles and Atascadero officials continue to object to the costs of a new $14.5 million countywide animal shelter—despite recent efforts to find common ground. 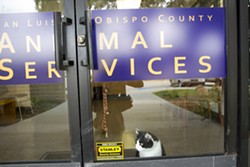 Since Paso Robles and Atascadero—the two cities in the county with the highest demand for animal services—walked away from the project to pursue their own shelter in October, city officials have met with North County Supervisors John Peschong (1st District) and Debbie Arnold (5th District) twice to try to strike a deal that would preserve the original project.

But a compromise wasn't reached in the meetings, according to those present.

"It was a little frustrating and disappointing," said Paso Robles Mayor Steve Martin. "There seemed to be pretty good optimism that we could work it out. But we had a second meeting and the parameters had not changed much."

According to city representatives, the county didn't move the dial enough on lowering the costs to the cities, for both the construction of the shelter and the ongoing service payments.

Instead, the North County cities are considering building their own animal shelter and contracting animal services to a Sonoma County-based nonprofit, Petaluma Animal Services.

Martin said the goal is to provide comparable animal services at a lower cost.

"People are in favor of us providing services at least as good the county's," Martin said. "If we can provide that level of service at a taxpayer savings, they certainly want that."

Atascadero Mayor Tom O'Malley noted that stray animals, most commonly cats, account for a large portion of North County's animal services demand, and that if the county commits to a proactive approach to reducing that demand—like more spay/neuter clinics and community outreach—that could revive the discussions.

"[That] would be a reason for the councils to re-look at their decisions," O'Malley said in an email to New Times.

County representatives emphasized that they haven't given up on convincing the two cities to rejoin the project. If Paso and Atascadero go their separate way, the county may have to redesign its shelter, and the costs would spike for the other cities—SLO, Morro Bay, Pismo Beach, Grover Beach, and Arroyo Grande.

Wade Horton, the county chief administrative officer, said he's still in discussions with both city managers about a solution. Horton said the $14.5 million price tag for the shelter isn't expected to change but indicated there could be other flexibilities.

"My hope is we can all move forward collectively," Horton said. Δ