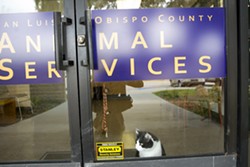 Faced with an Oct. 31 deadline to either commit to an animal shelter project led by San Luis Obispo County or pave their own path, the city councils of Paso Robles and Atascadero voted on Oct. 30 for the latter, withdrawing from an agreement to partner on a new shelter with the county and five other local cities.

The cities' decisions were based on issues officials had with the costs of the county shelter—$14.5 million—in addition to a desire for more local control and better shelter access, according to Paso City Councilman Steve Gregory.

"We've been very concerned about the cost of the animal shelter for quite a while and thinking, 'There's gotta be another way,'" Gregory told New Times.

Paso and Atascadero will instead pursue building their own "no-kill" animal shelter based in Paso, and they appear poised to contract its operations to a Sonoma County-based nonprofit organization, Petaluma Animal Service Foundation.

Gregory said he became personally familiar with Petaluma Animal Services in April 2017 after having a positive experience with them as a customer in the city of Calistoga, where it contracts to provide animal services. The nonprofit currently brings animal services to four cities in Sonoma and Napa counties, and it runs on donations, city contributions, and the help of volunteers.

"I said, 'What a great model,'" Gregory said. "We started talking to them and interviewing them."

The cities finalized their decision to withdraw from the county's shelter agreement at special meetings held in the early afternoon on Oct. 30. On Oct. 10, they'd entered into a three-week, $20,000 consulting contract with Petaluma Animal Services and Ravatt Albrecht and Associates to analyze the costs and viability of a North County animal shelter.

The estimates determined that construction costs could come out slightly higher or slightly lower than the cities' expected share of the county shelter—$4.9 million—and the ongoing annual service payments could be $50,000, or 10 percent, less than the payments required for the county's shelter.

But city staff reports warned that the analysis was based on several assumptions made during a short window of time and did not calculate some of the potential financial impacts on city resources.

Those risks and unknowns led Atascadero City Councilwoman Heather Moreno to vote no on the withdrawal. She was joined by Mayor Tom O'Malley—but the motion carried, 3-2.

"It boiled down to I didn't have enough information about the true cost," Moreno said. "The city is the final responsible party [to provide animal services] even though we have private nonprofit [operating it]. ... The buck stops here. What are the true costs of taking on that responsibility?"

The Paso Robles City Council unanimously voted to pull out of the countywide agreement.

The move leaves the remaining cities in the agreement responsible for the cost of the regional shelter. Prior to Paso and Atascadero's special meetings, the cities of Arroyo Grande, SLO, and Morro Bay wrote letters urging them to stick with the project.

"This action is wasteful to taxpayers countywide," Arroyo Grande's letter, signed by Mayor Jim Hill, read. "Two years of staff time, involvement of lawyers, and hours of public testimony may be jeopardized."

Their departures also drew a rebuke from SLO County officials.

"We will be moving forward without them," said Guy Savage, the assistant administrative officer for the county. "It is too bad. ... I suspect longer term it will mean higher costs for the citizens of Atascadero and Paso Robles."

The county facility will likely be redesigned to save costs and account for fewer animals coming in from North County. The Board of Supervisors will discuss the direction of that project on Nov. 7. Δ