Not afraid to evolve

# About a year ago, artist Shane Yates and gallery owner Peter Steynberg talked about doing an exhibit of Yates' portraiture. Yates calls it "psychological portraiture."

"[It's] something with a lot of depth and not just smiling people," he explained.

"When you paint a portrait, especially as intimate as this style is, you can really pull a lot of depth and emotion out of it," he said.

This style of portraits has been displayed before Yates participated in an exhibit at FrameWorks several years ago. The new show has evolved beyond Yates' haunting faces, which will still have their space in the show, but now represent about 40 percent of the overall content. 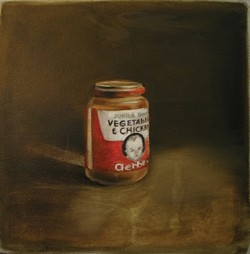 # "Evolution" being the title of the show, it's appropriate that what began as a portrait exhibit became so much more. Each section of the Steynberg Gallery will feature a distinct theme, reflecting Yates' unique blending of different styles and influences. His garage studio is full of art history books, and each collection of pieces has a style entirely its own. The purpose is to make people think, not necessarily about one issue or topic, but about many such as war, religion, history, and how human responsibility is bound to each of those themes. Yates is aware that many galleries would prefer to exhibit artists with a more tangible theme and style, but the Steynberg Gallery is not most galleries.

"You can't have one idea for anything in art," Steynberg said.

A photograph of the Black Dahlia crime scene inspired one of the larger paintings Yates created for the exhibit. A group of people stand a couple of feet from a woman's dismembered corpse, part of Yates' examination of the death of the goddess in history.

And the exhibit isn't all paintings. In one corner of the gallery, Yates will install a World War I stretcher he bought in an antique

# shop in Paso Robles. The stretcher, along with some military blankets and paintings of cans of Spam, Campbell's pork and beans, and Gerber take the exhibit in an entirely new direction, making for a show "as diverse as humanity," Yates said.

"What you end up with is humanity at its best in the front room, and I've been thinking of the back room as a wound," he explained.

With so much to say, Yates has also branched from a world of images to one of words. About five years ago, he began experimenting with poetry, and he will be displaying eight of his poems that correlate with the themes he explores through paint. It's not part of the original plan for the exhibit, but "Evolution" is meant to provoke thought and dialogue, not follow a predetermined trajectory to an already established conclusion.

"Each departure from the regular portraits it's funny because this could be in a series in and of itself," Yates said. "I would love to do a whole series of canned and bottled food."