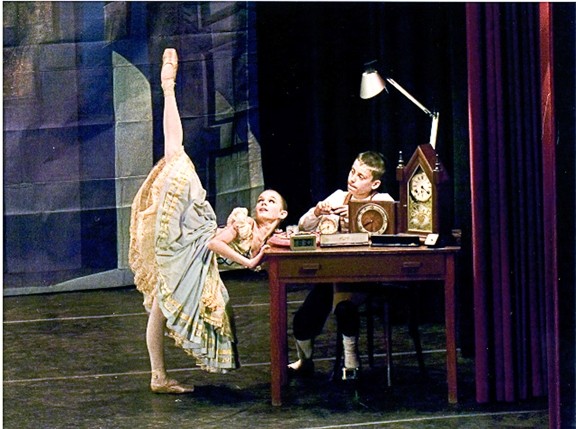 The people around Drew Silvaggio judge time in Nutcrackers. Something happened five Nutcrackers ago, or 10, or 20, or even 31. Civic Ballet’s annual production of the traditional holiday ballet spans more than three decades, and company member Jackie Lee has been in every single one of them. It’s a tradition, and not just for families who annually don their Christmas attire and make the pilgrimage to the PAC. It’s a tradition for the dancers who sigh, “not another Nutcracker,” in September and by the ballet’s Dec. 12 opening are utterly absorbed in a world of valiant nutcracker soldiers, beneficent sugar plum fairies, and naughty mice.

It’s a struggle to keep the performance fresh each year, particularly as this is Silvaggio’s sixth year choreographing the ballet. But he doesn’t rely on last year’s choreography. Instead, each year he recreates the entire production.

“As far as a piece of work, The Nutcracker is done. You have a set cast of characters. You have a set story,” he admitted. “But anything within that boundary you can really fuck with. That’s what’s really kept me sane all these years.”

Not every dance company creates a new ballet year after year. When the San Francisco Ballet meets to begin rehearsals for the holiday show, they start by watching last year’s video.

“If I wanted them to be a tree in act one, they would ask no questions,” Silvaggio said affectionately of his dancers. “I feel like dancers that have to learn something that someone else did, they don’t really have that ownership over the role.”

When it comes time to cast the main role, Clara, Silvaggio looks outside his company. His Clara must be between 9 and 15 years old. Surprisingly, how well the ballerinas dance isn’t necessarily foremost in Silvaggio’s mind when casting. If a girl is auditioning, in all likelihood she’s a proficient dancer. But there’s a second element to the audition, when Silvaggio gives each dancer a nutcracker and watches her emotional and physical reaction. The dancer who disinterestedly casts the doll aside is simply not meant to dance the role of Clara.

There have been two Claras each year since the fateful Nutcracker when the lone Clara had the flu and vomited backstage between scenes. Silvaggio distinctly recalls the moment when one of this year’s Claras was handed the doll. Her reaction was one of love and surprise, and he knew—and insists the entire room did as well—that she would be Clara. Isabel Deyo and Amber Lum perform the coveted role this year; the former is the daughter of Civic Ballet’s very first Clara, Lisa Deyo, who danced the role 32 years ago.

When choreographing, for the sixth time, a new Nutcracker, Silvaggio turns to his dancers for inspiration. He also relies on Pyotr Ilyich Tchaikovsky’s music.

“I sit in my apartment and I just play the music on and off again. I can imagine the people next to me laughing their asses off,” he laughed. “All his little accents, all his little runs in the music, that’s a huge inspiration for me because I kind of use it as a roadmap.”

For Civic Ballet fans looking ahead to Silvaggio’s somewhat wilder annual spring production—so sadly absent from the PAC last spring—the spring 2010 show is still clouded with uncertainty. Civic Ballet has dates reserved at the PAC, but the group might not get to use them. And if it does, in fact, use them, Silvaggio still might not have the opportunity to create a brand new ballet spectacular like Alice in Wonderland or Sidewalk Stories.

“In this economy, nothing is sacred,” Silvaggio said. Nothing, it seems, except The Nutcracker. After the holiday season is safely set aside, Clara’s dreams at a happy end, it’s time for something new and fresh. Silvaggio has proven that he has the talent and resources to dream and stage that something new. Perhaps it’s time for the community to encourage Civic Ballet to mount a full-scale original spring production, once the tradition of beautiful but somewhat repetitive holiday shows is behind us.

Arts Editor Ashley Schwellenbach is more of a mouse king than a Clara. Send a tail to aschwellenbach@newtimesslo.com.