There are some things to be said of a world in which people fall in love by literally falling to the ground, characters named Hope have conversations with former flames about losing hope, another character named Glory carries a paper bag containing her literally broken heart, and women in general are strident, insipid, ring-obsessed, and childish, but few of these comments are complimentary. 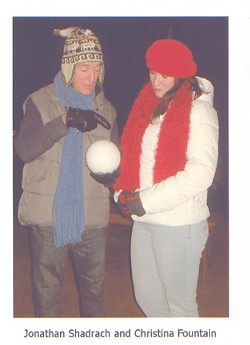 Instead, let’s talk of the world we are in: sadly, reality. San Luis Obispo County is sufficiently small that there is little joy to be derived from trashing a production a handful of artists doubtless worked very hard on. Especially when one of those artists is Jill Turnbow, whose recent comedy show at the SLO Little Theatre, Between Iraq and a Hard Place, was one of the more moving performances I’ve seen on any stage.

It was Turnbow’s involvement as director of Cambria Center for the Arts’ production of Almost, Maine that inspired a review of the play—a series of vignettes about love, which is apparently a big hit with high-school theater clubs. Out of respect for Turnbow, and her cast of four legitimately talented actors, I’ll keep the one-liners to a minimum. But I already forgot to mention that the woman wandering around with the broken heart happens to bump into a repairman who happens to pronounce that he loves her within a minute and a half of making her acquaintance. So, you see, it isn’t going to be easy.

The play consists of eight scenes played out between and around a prologue, interlogue, and epilogue performed by Jonathan Shadrach and Christina Fountain. And as if the task of acting wasn’t hard enough—if you’ve ever tried to fake enthusiasm for a lackluster Christmas or birthday present, you may have some sense, albeit small, of the nuances and difficulties of this craft—three of the show’s four performers (Shadrach, Fountain, and John Carroll) have five roles to contend with. The fourth (Kelli Rodda) tackles a respectable four roles.

The casting is somewhat dicey, given age disparities among the four performers. Rather than pairing the actors off by age and having the same two couples together throughout the entire play, Turnbow mixes it up. For the most part Fountain is paired with Carroll, the two being closest in age, and Shadrach with Rodda. But there are a few vignettes that criss-cross the actors, making for some uncomfortable May-December moments that don’t quite feel right. This is not to suggest that May-December romances have no place on stage, or in life. The difficulty is that they tend to inspire more cynicism from the audience; the burden of proof is on the May-December couple to make some case for the legitimacy of their relationship, and that’s impractical in a four-minute vignette.

On the subject of improbable behavior, this play seems to consist almost entirely of people grabbing and kissing one another without cause or build-up, as if they’d all been recently released from prison. When there isn’t any kissing going on, as in “Sad and Glad,” there’s time for the actors to actually go somewhere emotionally. As Sandrine, Fountain is quite brilliant at the uncomfortable polite getaway from an awkward encounter with an old flame.

For the most part, though, I was frustrated by playwright John Cariani’s use of his female characters, which really swerved into cliché sitcom territory with “Getting It Back.” Lendall’s (Shadrach) peaceful evening is interrupted by this shrill, hysterically nonsensical woman (Rodda) demanding that he “give it back.” “It,” of course, being the love she had given him over the years. After several minutes of this meaningless, strident tantrum, we get to the heart of the matter. She’s having a hissy for the same reason all women have hissies: She wants a ring.

At its best, Almost, Maine has a few fine minutes of dialogue that resonate with that low, vulnerable part of your gut that buzzes happily when romance is in bloom, and lurches like a doomed ship when those pretty romantic fancies take a sharp turn for the worst. Inevitably, Cariani takes these rare moments of realism and dashes them on the rocks with a bad pun about “waiting for the other shoe to drop.”

In the sixth scene, “Where It Went,” Fountain (as Marci) and Carroll (as Phil) seem to have some momentum behind them, some excellent “bad” chemistry—the kind that builds up after years and years of an unfulfilling marriage and home life. Marci’s limping across the stage wearing a shoe on one foot and a skate on another, pissed off at her husband and likely herself, and it’s the funniest thing I’ve seen all night. It reminds you of the little indignities that really infuriate you when things aren’t going well, how sometimes the catalyst for change is something seemingly small.

In other words, it reminds me of love and relationships. It resonates in a way that really good theater should. And Fountain and Carroll are giving it all they’ve got, heightening the tension, and just when you begin to think that maybe, just maybe, one of these vignettes will go down as a win, Cariani throws in a stupid pun that unravels all of the awkwardness and anger in exchange for a polite chuckle. This leaves me mulling over Phil’s admission at the peak of their emotional exchange.

“No, I had a rotten, lousy time,” he says, grinding out each word as if to wring out every last vestige of anger and disappointment it could possibly convey.

I feel you, Phil.