Not in my sports field

The battle between developers and proponents of slow growth may hinge on Prado Road, a small, bumpy, two-lane thoroughfare that runs from U.S. 101 and quickly dead ends in the fields near the South Hills in the middle of the city of San Luis Obispo. Though it’s like other meandering roads in the city that end seemingly in the middle of nowhere, this road is different: City growth depends on whether it becomes the major link between the east and west sections of the municipality.

A group of citizens collected about 3,200 signatures in support of an initiative that would stymie the city’s plan to extend Prado Road through a portion of the South Hills open space and alongside the Damon-Garcia sports fields. The city clerk is verifying the signatures, and if they’re valid, the initiative will appear on the November ballot.

The initiative effort has created a stir in San Luis Obispo City Hall. The city council voted on June 15 to study how the initiative will affect extensive development planned for the southern part of the city. City staff, known for supporting development, requested the report “for Council’s consideration prior to any decision to adopt the measure or to place the measure on the November ballot.”

Mike Sullivan, a park ranger, wrote the initiative and signature-gathering was led by Mila Vujovich-La Barre and Bill Wilson, a construction technologies instructor at Cuesta College.

“This road is an old idea, and it’s a bad idea,” said Wilson. “It would really be a travesty if it were pushed through.”

Wilson told New Times his group has been fighting the proposed road for seven years. The Margarita Area Specific Plan was adopted by the city in 2004 and zones much of the area’s land for future residential and commercial development. It also calls for the extension of Prado Road, which would connect South Higuera and Broad Street, but would separate the Damon-Garcia Park from hiking trails that criss-cross the South Hills open space. (There would be a small tunnel linking the sports fields to the open space.)

More than just a road

Prado Road would be extended and expanded to a four-lane highway. The city’s general plan calls for three large roundabouts on the route to help control traffic. City planning documents declare the future road, “is not a scenic route and is designated a future truck route.”

The city staff even reviewed the plans to make sure none of the trees in the median would “impede the emergency landing of aircraft” in case the street is confused with an airport runway.

The intersection of Prado and Broad would be just 20 feet from the park’s smallest field, where its smallest athletes play, said Wilson. All the fields are downwind from the proposed road. “The kids huffing and puffing out on the field would be sucking down car fumes,” said Wilson.

The initiative would do more than prevent a road from being built alongside the park; it would, “preclude the location of any development, as well as any street, roadway, or highway, within any portion of the Damon-Garcia property or the adjacent South Hills open space.” The initiative doesn’t offer alternative suggestions for the road. It simply deletes the last section before it can connect to Broad.

“It can’t just cul de sac,” said Tim Bochum, the deputy director of Public Works. “It’s got to be an arterial street.”

Bochum walked New Times through the city’s general plan. There are only four areas in town that can support future development, and three are in the vicinity of the Prado Road extension. In addition to the Margarita area, there’s the area around the airport, which is ideal for industrial development and the Orcutt area, which was recently zoned for residential build-up.

The city has produced detailed plans for all these areas. Tens of thousands of dollars have been spent planning the infrastructure to support development. Though the maps are drawn and the plans are in place, no developers have recently shown interest in starting construction, Bochum said. “The residential tracts were approved three years ago, but they didn’t go forward because the economy tanked,” he reflected. “The housing market is still bottomed out, so it’s hard to say when the projects will develop.” 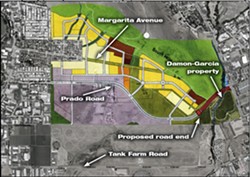 More than meets the eye?

There are some who think the initiative’s creators have more reasons for proposing to block the path of Prado Road than protecting a few soccer fields. “If it passes it would completely mess up the plans for the south part of town,” said San Luis Obispo Councilman Andrew Carter. “It really throws a wrench into the city’s plans.”

As well as the plan to build north of the new Prado Road extension, the city recently approved infrastructure plans for development of the Orcutt section of the city, an area bounded by Orcutt and Tank Farm Roads and the train tracks. This area of ramshackle houses and pastoral, hilly grasslands would be paved over for a 1,000-home development. According to city planning documents, this project would significantly affect traffic on nearby intersections, including the planned intersection of Prado Road and Broad Street.

Ernie Dalidio, a farmer who owns a field off the freeway just outside the city limits that’s been the subject of much controversy in the past ten years, said he thinks the initiative is really designed to thwart Prado Road ever being extended over the freeway to his land. “It’s really to close off Prado so the road will be choked off on the freeway side,” Dalidio ventured.

In fact, the initiative’s backers have tangled with Dalidio before. Vujovich-La Barre, belonged to Save SLO, a group that helped defeat the Dalidio Ranch Marketplace in 2005. If the initiative to incorporate and develop Dalidio’s land into the city had succeeded, Prado Road’s western half would have bridged the freeway and linked up with Madonna Road.  Some credit her—or blame her, depending on their views about development in the city—with preventing development the Dalidio property. The Prado initiative is the latest move in an effort to stop growth in the city, especially in the southern part of the city, according to Dalidio.

If Prado remains a dead end on its east side, the Margarita development north of the road would have access only to South Higuera Street. The development would be bottled up, Dalidio maintained. “Some of the names may change but this is the same old philosophy of slow growth that has created the mess we are in with traffic in the city,” he said.

Dalidio predicts that if the initiative passes, the traffic problems with the crowded Los Osos Valley Road overpass will spread to other intersections as more stores and eventual development increase the use of the city’s roads. More roads would have to be expanded to meet the future traffic needs of the city, he said.

The cost to build new roads or expand existing ones will be covered by the traffic impact fees paid by developers, Bochum added. “My concern if this small section is deleted from the plan is: where is the road going to go?” he said Bochum. “It has to go somewhere.”

Eugene Jud is a transportation engineer and has been a Cal Poly professor for 25 years. He said the city is already planning to expand Tank Farm Road into a four-lane thoroughfare and Prado Road could cut south and connect to Tank Farm at the Santa Fe intersection, instead of running by the park and meeting Broad Street.

Would that alleviate the expected traffic problems in the area? “In my opinion, absolutely,” said Jud.  “If you estimate five or six daily vehicle trips per resident, that’s not so overwhelming.”

Jud said the city faces a pivotal decision. Assembly Bill 32, The California Global Warming Solutions Act that was signed into law last June, mandates cities reduce their greenhouse-gas emissions to the maximum extent technologically feasible. Jud thinks SLO could be a leader in that effort if it focuses on maintaining parks, building bike paths, and enhancing public transportation, instead of building more roads in anticipation of more cars. “We have to start thinking about how we will travel in the future,” Jud said.

Jerry Bunin of the Home Builders Association of the Central Coast argued that building the road and allowing development to go forward as planned would actually help the environment. SLO has twice as many jobs as it does residences, he said, forcing roughly half the workers in town to commute from outlying areas and contribute extra greenhouse gasses. The commute impacts quality of life.

“Families lose their capacity to influence their community,” said Bunin. “All that time driving takes away from opportunities to coach little league or attend PTA meetings.”

Bochum said the city has studied several traffic models and that without Prado Road connecting to Broad, various intersections across town would back up as far Foothill Boulevard and Santa Rosa Street. Congestion and overuse means more road repairs, and road repairs always result in traffic delays.

“Traffic flow always affects the type of business that can operate there and its success,” said Byron Davis, one of the landowners in the disputed area. He has approved plans to erect a seven-building business park but is waiting for the economy and banking situation to improve before moving forward. The buildings would house medical and communication companies or serve as warehouses for light industry. “I would definitely have to reconsider my plans if this initiative passes,” Davis said.

Eileen Damon and her brother-in-law, Roy Garcia, own the largest parcel of land in the area, where they live on a large ranch. “This initiative is absolutely, completely nuts as far as I’m concerned,” he said. “When we gave the city that land for the park, they told us we’d have a road. If they close the road, we’ve got no way out of here except through some one else’s private property. It’ll make our land useless.”

“The Damon-Garcia park was designed to allow for the future road area,” Bochum reported. “Dirt removed for construction was piled up on the north side in anticipation for the roadway.”

Wilson alleges the city has indeed been planning this road from the beginning, but it kept that plan hidden from voters as they lobbied for the park. “The original bond measure that voters passed allocated 23 and a half acres for sports fields. There was no mention of a road, but the city is taking back four acres of that land and using it for the road. They leveraged our kids so they could acquire that land and use it for their project,” Wilson contended.

Wilson believes the city is trying to turn SLO into a clone of Ventura or Los Angeles and that voting for his initiative would send a clear message residents value quality of life over business growth. “We have a beautiful area here. Are we going to preserve it or ruin it?” he asked.

Though Bochum maintains the road is necessary and won’t have a significant impact on either the park or the nearby open space area, he said the Public Works Department will find another solution if necessary. “Our job is to respond to public demand.” he said.

Staff Writer Robert A. McDonald provided additional reporting. He can be reached at rmcdonald@newtimesslo.com. Contact contributing writer Nick Powell via the editor at econnolly@newtimesslo.com.