Not quite bloomin': It's a tad early to trip through hillsides full of poppies, but Figueroa Mountain Road is still gorgeous

Orange poppies protested against the weather on March 25, refusing to open their petals to the patchy clouds, bouts of wind, and random sprinkles of rain swirling around a bloom alongside Figueroa Mountain Road that’s just getting started.

Cross your fingers and give it a couple of weeks—and just maybe the hillside above will burst into color like it did last year. A spread of orange wide and deep, brilliant and basking in the mid-April sunlight.

As this quiet afternoon moves toward evening, I sit on a piece of wood overlooking the San Rafael Wilderness. It’s around 5:30 p.m., and the clouds drift stealthily up the folds between hills—flying low in wisps of dragon-like smoke that disappear over the hilltops, taking their chill with them and leaving blue sky in their wake.

I vow to come back again in a couple of weeks, when the sun has had time to coax more flowers into bloom—and to come back earlier in the day, so I have more time to explore before dark. Several vehicles are parked at the entrance to Forest Service Road 8N16, which is also closed to traffic and leads toward the famous Figueroa Mountain overlook (also closed, as are both the Cumbre and Pino Alto day use areas, due to concerns over dead and dying trees). It’s about a 2.5-mile hike to the summit, which I wish I could start heading toward, but it’s beginning to get dark.

Instead, the taste of Figueroa Mountain Brewing Co. beer is calling and so is a visit to its newish, much larger tasting room in Los Olivos—about 13 miles from where I’m standing.

Editor Camillia Lanham knows a trip to Fig Mountain includes both a hike in Los Padres National Forest and a beer in Los Olivos. Send comments to clanham@newtimesslo.com. 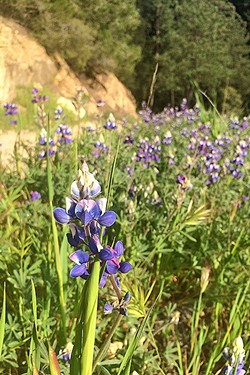