The people onstage at Cambria’s Pewter Plough Playhouse are doing this thing I’ve heard of, where you pretend to be someone else. I might be wrong, but think it’s called “acting.” Whatever it is, it involves a lot of exaggerated voices, stale pauses, and ill-timed gestures. 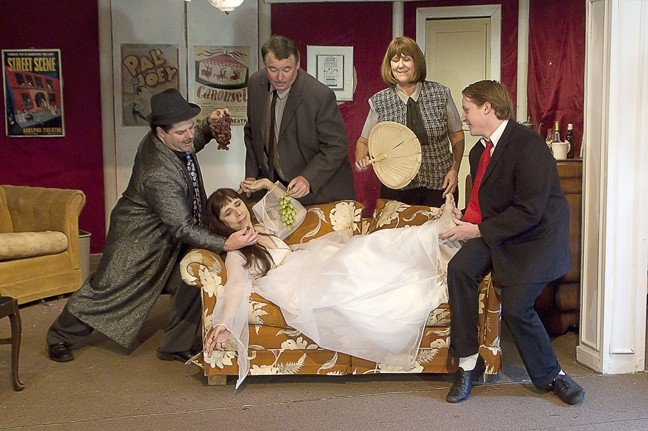 The four actors in The Grand Manner, written by A.R. Gurney and directed by Gene Strohl, seem each to exist in their own separate worlds. Were this a movie, one might be forgiven for believing that each of them had filmed the scene separately and then someone in post-production had spliced it awkwardly together. They might be good actors individually—however melodramatic—but together they struggle to create a believable situation.

It doesn’t help that Gurney’s dialogue, often so witty and insightful, feels rather dorky in The Grand Manner, a play in which every character grows steadily more annoying, in which people wave their arms about airily and windbag about the theatuh, in which the main character, when nervous, actually says the word gulp.

That character is “Pete” Gurney, the playwright’s version of himself. Played by Kasady Riley, who tries too hard to convince you he’s an awkward teenager, Pete travels to New York City to see Broadway star Katherine Cornell (Toni Young) in Antony and Cleopatra, which Pete is studying in school. Pete, eager for a peek into the life of his idol, manages to meet the regal Katherine backstage after her performance, and soon finds himself mired in a lot more theatrical hullabaloo than he bargained for: the fragile, oversensitive stage actress, moaning about being trapped in the wrong role; her overprotective manager/lover, Gertrude (Sandy Bosworth), whose job is primarily to stroke Katherine’s delicate ego; and Katherine’s blustering, flamboyant, tantrum-prone producer/director/husband (in that order), Guthrie McClintic, a role shared by Jeff Walters and Tracy Mayfield.

This premise is based on the playwright’s real-life encounter with the legendary Cornell, which, though fleeting, inspired the young Gurney to pursue a career in the theater. A brief initial scene allows us to view the event as it actually happened: Gurney jittery and excited, thrusting forth a program to be signed; Cornell warm, charming, and tired. It’s over pretty quickly. Gertrude, or “Gert” hustles the star-struck young man out the door. The second, and much longer, version is Gurney’s fantasy of what could have happened had he managed to stick around a little longer that night. In Gurney’s dreamland, these three theater veterans manage to lay bare their secrets, dysfunctions, and anxieties, gesticulating wildly one minute before collapsing into sobbing heaps of self-pity the next. They maintain a stagey kind of self-consciousness throughout their emotional devastation, of course: perfectly aware of the silhouettes they cast; careful to enunciate and project their sorrows all the way to the back row. In reality, it’s unlikely that such a tightly knit, professional unit would crumble in front of anyone, let alone a geeky prep school kid from Buffalo.

The overblown acting the cast is guilty of is perhaps supposed to recall the elegant, detached theatrical style from which the play takes its name: the grand manner. The golden age of theater is gliding to an end, as film and television gradually lay claim to audience’s imaginations. Writers like Tennessee Williams, whom Katherine often wistfully references, are bringing a fresh, natural, unpretentious style to the stage. Katherine fears there’s little room left for her now-antiquated approach to the craft, and reacts, of course, in the grand manner: with great displays of theatrical grief, throwing in a Shakespearean death scene to drive the point home.

But even in the grand manner, the difference between acting abilities is clear. As Katherine, Young delivers the most believable performance of the four, and her reenactment of Cleopatra pressing an asp to her bosom is actually one of the high points of the evening. But other performers are terribly unsubtle, as if determined that their characters should have no more than one dimension. Riley, as Pete, is perpetually jumpy, earnest, and voice-cracky. It would have been nice to see some kind of trajectory from this initial overwhelmed state to a more relaxed one as the night wears on. Riley’s reaction to his first sip of hard liquor is so hopelessly overdone, you’d think he learned to act from watching Loony Toons.

Mayfield, who played Guthrie on opening night, is boisterous and wheezy in a directionless kind of way, like a man angry because he has forgotten what he is angry about. Mayfield seems more interested in perfecting his character’s rants than actually making them work in a scene with other characters. The hallmarks of a normal conversation are nowhere to be found. He’d be great if all his scenes were monologues.

The irritating nature of these characters is compounded by the repetitive nature of the dialogue. Katherine keeps repeating that she’s not good, pretty, or young enough. Every time, Gert dutifully replies, “Yes, you are, Kit,” and “You know that’s not true, Kit,” as if they were playing a game of neuroses tennis.

Earlier in the evening, Pete makes up a story about his girlfriend who is waiting for him at a trendy bar, and throughout the rest of the play, Katherine urges him again and again to “Go to your girl!” Though Pete makes an excuse every time, you wish he would just go and be done with it.