Not so happily ever after: Artist Camille Rose Garcia shows darker side to fairy tales at Cuesta College

The tea is everywhere. Which isn’t surprising, because the porcelain teacups are dancing about, piling on top of one other into the sky. A forgotten, half-eaten cake melts as a strange man with long eyelashes and a top hat lectures a sullen blond girl with a ragged little black bow perched atop her head. Oh, and a giant rabbit is also in attendance. 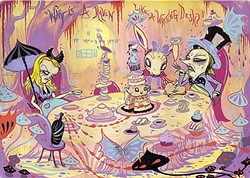 Starting with a “once upon a time” and ending faithfully with a “happily ever after,” fairy tales are a highly idealized version of how we’d like life to be. But there are thorns everywhere. Snow White bites the poison apple; Cinderella is basically a slave to her evil stepfamily. If you go back even further, the original versions of fairy tales are especially grim (pun intended). In an older version of The Little Mermaid, Aerial doesn’t get her prince; she simply turns into sea foam and washes away with the tide.

Growing up in Orange County meant Garcia jumped onto the Disney bandwagon early on in life. Her father was a Mexican activist filmmaker and her mother was a muralist. Naturally, art was her destiny. Garcia’s mom would take her to art museums, and art books were abundant in their home.

“I was pretty immersed in the world of Disney,” Garcia said. “The idea of being able to draw something and bring it to life was magical for me.”

And so like the great Walt Disney himself, Garcia looked to fairy tales for her artistic inspiration—with a slant toward the dark side.

“I like that it becomes part of this lineage of retelling stories over and over,” she said. “I always had a sensibility toward a dark sense of humor. I find the juxtaposition to have a darker edge but keep this light fun feeling to be an exciting challenge.”

Garcia describes her artistic style as a sort of fractured surrealist folk art. She has left her mark on popular stories such as Snow White, using plenty of colors that pop and outlining everything in black. Her characters have that sweet wide-eyed fairy tale look, but haunted. They’ve seen some stuff.

For the Alice in Wonderland series, Garcia didn’t have to look that hard to find the dark side.

“The story sort of has this psychedelic and disorienting quality,” Garcia said. “I sort of tried to exaggerate their darker, more macabre vibes. The Mad Hatter worked with chemicals that drove him mad. The Caterpillar is sort of this psychedelic guru. I try to read between the lines.” 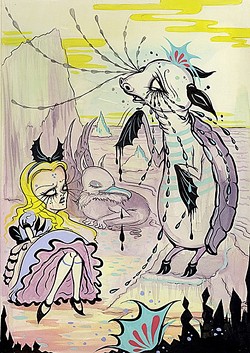 But what’s so terribly dark about sweet, sweet Alice? Well she did choose to jump down the rabbit hole for starters.

So Alice in her little blue dress and white apron becomes a slightly more pouty, vixen-like version of herself with thick black eyeliner, a tattered black bow in her hair, and a steam-punk lavender gown with a light blue apron.

“We’re all familiar with the story,” Garcia said. “It’s also a great show for aspiring artists to see because I’ve included sketches and so much of the work process in it. There’s something for everyone.”

Ryah Cooley is finding her happily ever after at rcooley@newtimesslo.com.