Not your average bowl-of-fruit painting

The Art Center serves up full-frontal nudity, and film

Muara Johnston describes figure drawing as Pilates for painters. Any painter, regardless of skill and experience level, can benefit from the presence of a live model from which to draw. Which is why the assistant director for the SLO Art Center selected two documentaries featuring nude models to screen in conjunction with the Art Center’s exhibit, Corpora in Extremis (Bodies to the Limits). The public is invited to view The Nude Model and Art is an Attitude: The Art of Drawing the Nude as part of the Art Center’s movie night June 15 at 7 p.m., a program that began last October with the purpose of enhancing the exhibits.

“The centerpiece of art has always been human beings,” said Bill Buchman, director and featured artist of Art is an Attitude. “And, particularly, the nude, throughout the entire history of art. I think that the human figure is the basis for our concept of beauty.”

Buchman, of Florida, created the 93-minute instructional video in the summer of 2007 (it is now available for sale on Amazon.com for $34.95). He hired a co-director, who assumed responsibility for the technical aspects of the shoot. They filmed for two days in Buchman’s studio. For the sake of simplicity, he worked primarily with a single female model, an actress and dancer he had used before and selected because he knew that she would be comfortable in front of the camera. All told, the project was finished within three months.

Using a style that he describes as expressive and gestural—the middle ground between representational and abstract—Buchman’s purpose for the film was “to take [his] teaching technique out of the studio and to the larger public and to take people inside a first-hand experience of what drawing the human figure was about.” He sketches quickly, sticking to the fundamentals, as an hourglass figure most closely resembling a fertility goddess emerges from his brush. Heads rarely follow, and faces almost never. Working to maintain a spontaneous flow—Buchman doesn’t like art to be overworked or laborious—he strives for a universality that might be undermined by the addition of a face, and the expression and personality that a face conveys.

“I love the human face,” he said. “I started out doing street portraits in Denver, Colorado. But with everything else, you have to specialize. Even Picasso said, ‘I’ve ruined a lot of drawings by putting the head on them.’ People think it’s about something called realism or reality whereas it’s really about making magic.” 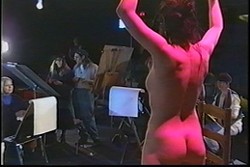 In his film Buchman draws the human figure in a variety of styles, from cubist to abstract, using tools that include Conté crayon, gel pen, ink wash, Sumi brush, soft pastels, watercolor crayons, and reed pen. He works in conjunction with European companies that import water-based drawing tools and media. His models in the film are exclusively female, although he does work with male models when he can find them (a task he says is not altogether simple in Florida). For painters who are interested in figure drawing but embarrassed about the prospect of working with a nude model, Buchman, who has been drawing from live models since he was 16, recommends participating in a class with a group of artists to minimize both cost and awkwardness.

“Anyone who wants to draw the figure would quickly realize what a normal thing it is and how comfortable everyone is,” he insisted. “The whole experience is on another level than purely voyeuristic. There is something naturally clinical that arises in a setting like that.”

But Rob Thompson, one of four producers of The Nude Model, approaches the subject from a different perspective. His film crew recruited artists and models to participate in a staged figure drawing class in a rented theater space, filming in a single afternoon. They researched the history of nude modeling, discovering that many of the models who now grace the walls of the world’s most prestigious museums were considered morally inferior to prostitutes.  In the film, models discuss the physical and emotional discomfort that attends their profession.

“Unless you do a life drawing class, people have no idea what it’s like for the models,” said Thompson. “Some people felt very awkward about telling people they were nude models. There’s still a lot of prudery.”

Their models were both male and female, and sometimes their stories about nude modeling differed accordingly. One woman talked about modeling through her seventh month of pregnancy; a male model recounts an unfortunate incident in which he became aroused while posing. But the discomfort was balanced against the benefits of collaboration and the inspiration of the human form.

“It’s a different energy from drawing a bowl of fruit,” said Thompson, who has participated in an art class with a nude model.