Nothin' but a hound dog

If anyone can be described as stupidly brilliant, it would be ’50s radio DJ Alan Freed, the self-destructive hero of SLO Little Theatre’s latest undertaking, This is Rock ‘n’ Roll. Freed, known for popularizing the term “rock ‘n’ roll,” is remembered for his perpetual fight to bring “black” music to the mainstream airwaves. But despite his good works, Freed was hardly a saint, and his corruptibility and vices ultimately got the better of him.

Freed “screwed over a lot of the black artists he was fighting for,” pointed out playwright David Vienna. He may have been called “the father of the rock ‘n’ roll craze,” but airplay often came at a price—or benefited Freed indirectly through royalties. By the ’60s, a payola scandal had destroyed his career. But that part of the story is less interesting than the decade of defiance, decadence, and drinking that preceded it. Luckily, that decade is what this show is really about.

While set on the East Coast, Rock ‘n’ Roll is a thoroughly homegrown production, directed by the Little Theatre’s Kevin Harris and choreographed by the Civic Ballet’s Drew Silvaggio. Its playwright, Vienna, is a former New Times arts editor.

Freed’s essence is captured by Chad Stevens, a longtime Freed admirer who also happens to be a damn good actor. Stevens portrays Freed as a likeable, if sleazy, character—a fun-loving, ambitious fellow who doesn’t see the harm in a few shady dealings here and there on his way to the top. As long as it’s all for the greater good, right?

Stevens’ real-life job as a radio DJ is evident in his glib delivery and—even when Freed is totally hammered—in the loving way he places a record on a turntable, as if tucking his own child into bed at night.

Kerry DiMaggio, in a lead role as Freed’s second wife, is a singing, dancing dream. Her performance as Jackie is, as playgoers have come to expect, terrific. Her dress-changing skills are pushed to the limits in this show, too, with what seemed like 20 costume switches. Jackie’s a stylish lady.

It’s also wonderfully satisfying to see Dick Clark vilified in a production. Vienna, Harris, and Silvaggio—each with his own set of tricks—parody Clark (played by Bill Kirkpatrick) and his squeaky-clean, all-white American Bandstand.

And Kirkpatrick is Dick Clark, down to the way he walks, sits, talks, and the way he … pauses. For … emphasis. 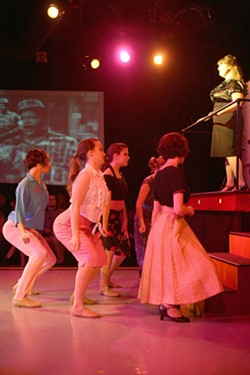 The contrast between Freed’s and Clark’s musical leanings is highlighted in two separate performances of “Hound Dog,” one set in a smoky nightclub, the other under the bright lights of Clark’s Bandstand. The choreography, Silvaggio said, is exactly the same in both scenes. However, the intention varies wildly between the two: The first “Hound Dog” is sultry, shady, and deep; the second is a chipper, whitewashed copy.

While the general story unfolding on the stage is a true one, “we did take a few liberties,” Vienna said. “One of them was making Dick Clark more of an active villain than he actually was.”

Harris, Vienna said, asked for “a moustache-twirling vaudevillian villain,” and the script was written accordingly.

The process of writing Rock ‘n’ Roll, Vienna said, was “frighteningly short.” An outline was created in a month’s time, and a month after that, he had finished the first draft. For inspiration, Vienna consulted videos on the web and biographies he found with differing angles on Freed’s life.

When this writer sat in on a rehearsal of Rock ‘n’ Roll, the show was rapidly tying up its technical loose ends before opening night. With a live band perched above the stage, two screens onto which video footage is projected, a new sound system, and an opulent wardrobe, there was a lot for Harris, associate director Lisa Woske, and the crew to coordinate. But the outcome was already looking good.

And while Harris’ personality comes through loud and clear in Rock ‘n’ Roll, its successful delivery is largely dependent on Silvaggio and his dancers, some of whom are culled from the Civic Ballet.

“The way he wanted me to use [the dancing] was not like a typical musical,” Silvaggio said. “The dancing stands alone.”

Fortunately, Silvaggio said of Harris, “he’s not a micro-manager; he just lets them do what they do.”

Harris would give instructions like, “I want something really odd and weird here,” Silvaggio said, and from those few words, the choreographer created the swinging dance numbers which, set to a score of cherished ’50s favorites, tell Freed’s story better than any biography.

The famed DJ may have exploited the artists whose music he championed, but his efforts were a wobbly—often inebriated—step in the right direction. He was passionate about getting black music into the mainstream, a goal he largely achieved shortly before the collapse of his career and liver.

“He liked a good fight,” Vienna concluded. “But I don’t think he would have been doing it if he didn’t believe it.