Nothing ever stays the same...and some things never change

It has been 13 years since I walked the wide, open-air halls of Arroyo Grande High School as a student: before Nipomo High School was a blip on the radar or a $26 million dollar renovation was in the works. Today the area nestled on the corner of Fair Oaks Avenue and Valley Road, surrounded by fertile farmland, still smells the same way it used to: fresh and clean. 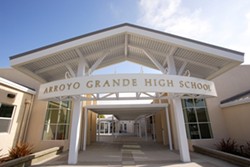 Fresh and clean is an understatement. On Aug. 25 students will tread upon campus for their first day of school—with new clothes and notebooks, but without, for the most part, bulldozers, barriers, and gruff construction workers wandering about.

The Arroyo Grande Eagles are known for their athleticism, agricultural programs, and in the past, an overcrowding problem. When I attended A.G.H.S., there were probably 3,000 kids, with that number steadily increasing over the years. Since the inception of Nipomo High School (located a few miles south of Arroyo Grande), the student population has been reduced to 2,200.

Interestingly, the $26 million renovation broke ground after the student body was reduced, just two years ago. Today, what was once a hazy, laid back campus, is up to snuff with brand-new administrative offices, and a full and modernized kitchen.

On my tour with Conan Bowers, assistant principal for more than four years, I’m led toward the bright, massive, brand-new cafeteria/multi-purpose room. It contains a huge projection screen on one wall, as well as plenty of indoor picnic seating.

Next, we approach the center of my previous stomping grounds, and the school’s. I think back to my locker in Senior Hall, and I get excited. I sadly discover that the Hall no longer exists—it’s now in the “under construction” category. There are no lockers in sight, the entire place is gutted, and a sprinkling of drywall dust covers every inch. In fact, there is not a single locker at Arroyo Grande High anymore.

Bowers admits that the cost to make the change was substantial, but necessary. “The students have two sets of books, one for home and one at school.” According to Bowers, theft was always an issue as the lockers were vulnerable, and ultimately, the students have responded well. Oddly, my back and shoulders feel better after our conversation.

I’m sad to report that there are no future plans for Senior Hall, although an Associated Student Body staff member told me, in passing, he hopes it will become some sort of display case. I tell him a shrine to the class of ’95 would suffice.

I soldier on, hoping to befriend a student, a la Drew Barrymore in Never Been Kissed.

Eli Stein, a 2008 graduate, says the powers that be had just taken out the lockers in Senior Hall when he became a senior. A bittersweet ending to a happy four years at A.G. for Stein, who admits that pre-renovations, the school “Looked pretty janky. The changes were necessary. And now there is crazy [good] architecture and landscaping. It is sweet.”

What is the improvement that most impacted students? “The overhead rain protection.” Says Stein.

On the other hand, the closing off of 80 percent of the Quad during construction—the hub and heart of the school—was tough on students. But necessary, Bowers explains, “The place was falling apart, the kids had nowhere to eat.”

Today, the Quad is back to its former glory, sitting just across from the cafeteria. It’s just as I remembered it: a park-like setting in the center of campus, patches of lush green grass, cement walkways, and bright blue picnic benches; camera-ready for its first day of school.

With the administrative offices at the front of the property near the Clark Center for the Performing Arts, the Quad as its neighbor, the school still feels very quaint, underwhelming and beautiful.

Arroyo Grande High is not unfamiliar with change. In 1993 I used to eat lunch on a grassy knoll. That knoll is now known as the Clark Center. Currently, the center is getting a renovation of its own—a $2.3 million addition that should be completed in December (see “Expand on that, please,” New Times, April 10, 2008).

Farther from the main campus, the pool and tennis courts were redone. Even the parking lot, the welcome mat of the school, was repaved.

What else is on the improvement agenda for Arroyo Grande High School? As I walk around campus, the farther back I go, where I remembered the library and ag departments to be, I notice things look pretty much the same.

Upgrades to this part of the school will eventually happen: the automotive and agriculture departments, as well as the construction of a new library, according to Bowers. By Christmas, a few of the portable classrooms will be replaced or removed, and a foundation is working on raising funds for a new gymnasium.

Academically, a culinary school will be established, something akin to what Paso Robles High has.

Regarding nutrition, Bowers boasts about their campus policy of low-fat food, with not a soda machine in sight. “The cookies are even healthier.” Says Bowers. To piggyback on combating childhood obesity, school fundraisers have nixed the selling of chocolate or candies.

Throughout the entire hubbub, the school doesn’t waste space, either. The walk-up windows where food used to be sold are now kiosks where kids can buy prom tickets or turn in a late note.

But the number one priority? “We are excited to get back to normal.” Says Bowers.

On my way out, I walk slowly past the sea of chain link and the field at Doug Hitchens Stadium where I spent my last day at Arroyo Grande High. Memories hit me like a stack of social study textbooks and the nostalgia bomb goes off: parties, the senior luau, powder puff, signing yearbooks in the quad, Taco Bell at lunch (or never coming back after lunch), and more parties.

That is what Arroyo Grande High School is, a legacy. Where memories will never fade, even though inevitable change happens. Where tradition and excellence have coalesced for over 50 years. If that doesn’t deserve a few nips and tucks, then what does?

Amid the evolving landscapes, future expansions, and much needed additions, Arroyo Grande High School will stay true to its theme: providing grades 9 through12 a safe place to learn, love, and be free. Kind of like a zoo.

Of course, we all know that you enter the real zoo when you walk away from the field at Doug Hitchens stadium.