Now more than ever, we should be supporting SLO county's small organic farms

File Photo By Hayley Thomas Cain LEAVING A LEGACY Bill Spencer and his wife, Barbara, own Windrose Farms, east of Paso Robles. The couple will be honored with the Legacy Farmer of the Year award during the 32nd annual California Small Farm Conference, Feb. 27 to 29, at Cuesta College's North County campus. Here, Spencer checks out a canvas tent in preparation for the September 2014 Heirloom Tomato Festival.

The Central Coast growing region, which extends from Monterey to Santa Barbara County, is known for producing a number of key export crops including wine grapes, lettuce, and strawberries. The area has a good number of small organic farms, according to a recent study on our county food systems. To learn more about the Food Systems Atlas, a comprehensive 2019 study on the SLO County food system, published August 2019, visit slofoodsystem.org/food-system-resources.html. Feel like delving deeper into the workings of small farms and their impact on our ecosystems? The Food System Coalition SLO will hold its next meeting on May 20 from 9 to 10:30 a.m. at Copeland Pavilion, French Hospital, 1911 Johnson Ave., SLO. The 32nd annual California Small Farm Conference takes place Feb. 27 to 29 at Cuesta College North County Campus, 2800 Buena Vista Drive, Paso. Get your tickets at casmallfarmconference.org.

The American disconnect between food and farmer is nothing short of catastrophic. Farming is complicated and grossly underestimated, especially small, organic farming in a state that doesn't seem to support it very well—ask any small farmer about getting their California Certified Organic Foundation Certification. It's as if you just asked them about their time in line at the DMV (and it took them years to get through it). Or bring up the subject of water, bug invaders, or sustainability practices ... and you better pull up a chair. It's just not that simple.

Fortunately, the "think globally, act locally" mentality is alive and well on the Central Coast when it comes to buying food. According to GleanSLO statistics, our purchase power makes a difference for the livelihood of these small farmers. SLO County is home to plenty of enlightened choices: 18 weekly farmers' markets, 12 community gardens, 49 school gardens, and 208 produce donations from home harvests.

Many of the area's small farmers are getting together Feb. 27 through 29 for a statewide conference held at Cuesta College's Paso Robles campus. The Community Alliance with Family Farmers (CAFF) chose Cuesta for its 32nd annual California Small Farm Conference—quite an honor.

"This year we landed on the theme of Strength Through Diversity, because really, I think it's at the heart of resilience," said Evan Wiig, who has been coordinating the farm conference.

Wiig is the founder of The Farmers Guild and director of membership and communications at CAFF.

"There are so many different elements of diversity; agriculture—and especially agriculture at a larger scale—is really veering toward consolidation and veering toward being homogeneous [with] a lot of mono-crops, and some of the challenges we see in our food system, and what really puts our food system at risk is the lack of diversity," Wiig said.

The bulk of the Small Farm Conference workshops take place on Feb. 27 to 29, but throughout the month of February farmers and food advocates from all over California have been meeting for on-farm demos, field days, an Ag Policy Forum, and mixers.

"There are certainly issues related to climate change ... the big issue of our generation," Wiig said, "and folks just getting out of college—that's really what they're having to look at.

"Right now the average age of farmers is about 60 years old," Wiig added. "It's dangerously high. So most of the farmers today might actually see the biggest impacts of climate change. What they're doing on their land—how they're operating—the system in which they're producing food is, in a lot of ways, very shortsighted and antiquated. The model isn't really looking at, 'What are things going to look like in 50 years?'"

I recently spoke with Bill Spencer, aka Farmer Bill, just before he was about to get on a tractor and spread a few tons of compost. Spencer said he is ready to retire soon from his small family farm (certified organic since 1999), which is currently transitioning to biodynamic.

Spencer will be at the Small Farm Conference—in fact, he and his wife, Barbara, will be receiving one of the 2020 Family Farm Awards: the Legacy Farmer of the Year. While he's there, I'm sure many of the younger farmers will want to pick Spencer's brain on his move to biodynamic farming on top of being organic.

Spencer's Windrose Farm east of Paso Robles grows 12 acres of veggies, apples, and stone fruit. He also has 5 acres of sheep pastures. The rest of his 50-acre land is a habitat full of animal, bird, and insect life.

Spencer is a treasure trove of farming expertise. He said many of his interns move out of state to places like Maine where land isn't as expensive and the farming community is ultra supportive. In 1962, land in California cost $300 to $400 per acre, he told me, and people were able to pay off their mortgage. He said the same ground today costs $20,000 to $30,000 per acre.

"California is so big in agriculture ... it's virtually impossible to ever buy land and actually ever pay it off. Not everybody has a Daddy Warbucks in their back pocket who can pay for everything," Spencer said.

"The problem is most of the young farmers that are doing the best they can are on leased ground, which is short-term," he continued. "They make money, they send their kids to college, and they do a good job, but they never own the land, and therefore ... the kind of permanent infrastructure in the form of habitat for beneficial bees and other insects, you don't plant because it's a perennial and it becomes the landowner's property once it's anchored in the ground. You can't build a well, or a big irrigation system or sustainable practices that will send you on for decades because they may only own it or have a lease for two or three or maybe 10 years at the most."

The information on what these farmers are talking about is out in the open. During a Feb. 11 free SLO County Food System discussion held at French Hospital, Ellen Burke, assistant professor of Sustainability in the Built Environment at Cal Poly, presented SLO Food Systems Atlas: a comprehensive 2019 atlas she and her team authored as an overview of the interrelated aspects of the county's food system from a resilience and sustainability perspective. 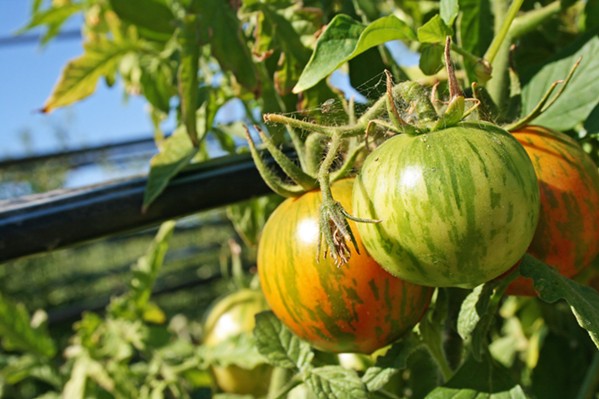 The data and community research presented in the Food Systems Atlas was collected at four community workshops in Los Osos, Paso, and Nipomo, hosting 566 participants, in addition to in-person interviews with 23 small farmers between 2015 and 2017. The majority of the farmers interviewed have more than 20 years experience in organic farming. More than half of the farmers grow on less than 5 acres, while a third grow on 20 or more acres.

One of the report's charts answered a question I always wondered: How many SLO County residents are supporting our small farms? Sixty percent of workshop participants said they shop for their produce at the supermarket, 14 percent at a warehouse store, 12 percent at the farmers' market, and 6 percent with a CSA.

Farmers voiced a range of issues, including drought, labor, and land prices. The study identified major themes around the ability to market produce for a fair price and access to distribution channels—both at the local farmers' markets and larger regional networks.

Thanks to Burke's study mapping the county's foodshed, the conference this weekend will have plenty of data and perspective on SLO County's food and its impact on the economy and the environment. And hopefully, our local farmers can use the conference forum to support their efforts to keep the soil healthy to grow our food for years to come—because as much as the natural elements have an effect on our farming, it always comes down to people and support to actually thrive. Δ