Nurses speak out in support of staffing ratios

On the corner of Santa Rosa Street and Murray Avenue in San Luis Obispo, people wearing red scrubs began to gather around noon on Oct. 7. A few had their kids with them, strapped into strollers, and others were holding red signs that read, "Safe Staffing Saves Lives." 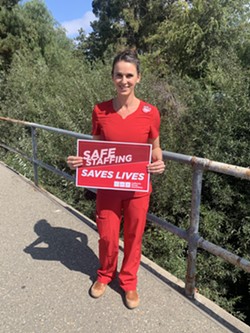 These Central Coast registered nurses and California Nurses Association union members met outside Sierra Vista Regional Medical Center to advocate for the nurse-to-patient ratios they are afforded by a California law, the only such requirement in the nation.

When cases were surging in January, the state issued waivers that allowed hospitals to temporarily exceed ratios. From Cunningham's perspective, the same option should be available during other surges.

"It would have made all the sense in the world to do the same thing during last month's Delta surge," Cunningham told New Times in an Oct. 7 written statement.

For Baker and other nurses, lifting ratios leads to burnout for healthcare workers and doesn't help patients.

"As nurses, when we saw the request for ratio waivers, not only did we feel extremely let down, but we are worried about our patients," Baker said. "Historically, the studies have shown that [without ratios] patients are at higher risk to get infections, there's higher [chances] for mistakes to be made, so the care is just much better when you have ratios."

In response to the nurses speaking out on Oct. 7, Cunningham stood by his original stance.

"Whatever its merits in normal times, complying with the ratio requirement during a COVID-19 surge—in the middle of a nationwide nursing shortage—forces hospitals to turn away patients in need of an ICU bed," Cunningham said. "We cannot afford regulations that make it difficult for hospitals to care for sick members of our community."

From Baker's perspective, making nurses take on more patients will only make the shortage worse. She said it will inspire nurses to leave the field. Baker suggested some quick fixes that hospitals can implement right now to improve patient care with the staff they already have.

"There's things that we can do including training staff for other departments, establishing a float pool of nurses, and providing incentives for cross training so that nurses can float to other departments without being called off of their shifts when their department is low," she said. "There is not a single nurse that I've talked to in my hospital that thinks that ratio waivers are the solution for the problem that we're facing."

Tenet Health Central Coast, the company that owns Sierra Vista and Twin Cities hospitals in SLO County, said in a written statement, "While we value all of our nurses who are represented by their union, we are disappointed that their union took this action."

"The demands of COVID-19 have placed a great strain on all California hospitals and we remain committed to protecting the health and safety of our patients and staff," the statement continued.