O health care, where is thy sting?

Do you recall the guy in Michael Moore’s film Sicko, whose fingers were severed, who had to choose which finger he wanted to save because his health coverage would pay for reattaching just one? Well, Cencal Health is a lot more understanding than that. If that patient had had the assistance of CenCal Health, he probably could have kept them all. CenCal Health calls itself “a local solution to a national problem, and a national model for healthcare.” 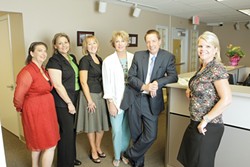 CenCal Health is a community-sponsored health organization that became established in San Luis Obispo County in March, but has been active in Santa Barbara County for 25 years. The bilingual staff helps people who are covered by Medi-Cal with all aspects of their medical care, everything from choosing a doctor to arranging an organ transplant. A primary goal of the organization is to secure care for uninsured and underinsured patients before emergency treatment becomes unavoidable.

CenCal CEO Bob Freeman noted, “It costs up to ten times as much for a trip to the emergency room as a trip to the doctor’s office.”

How do patients learn of CenCal Health’s services? The organization contacts every person who applies for Medi-Cal in SLO County (25,000 people here already have it) within 48 hours, according to Freeman.

CenCal Health heeds and compensates for the varied cultural norms among its many beneficiaries. “To the Chinese, for example,” Freeman pointed out, “the color white is associated with death.” Consequently, the sight of a doctor coming to treat them dressed all in white can be disturbing. Krista Morley, CenCal’s manager of Community Relations and Marketing, provided another example. In Santa Maria, Morley said, there’s a small population of Oaxacan farm workers who speak neither English nor Spanish, but rather an indigenous tongue known as Mixteco. If they are eligable for Medi-Cal, such farm workers have access to services in their native language, through personal translators provided by CenCal Health. Telephone translators can speak Vietnamese, Farsi, Russian, and other languages.