Should there be a law against cutting down oak trees?

As shiny acorns drop to the ground around SLO County ready to grow into the signature trees of our local landscape oak lovers are talking about the best way to protect our 723,481 acres of oak woodlands.

Is a countywide ordinance appropriate? Does a voluntary 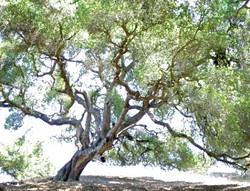 # approach work? How can we mitigate for the loss of a 500-year-old tree? These are some of the questions under discussion at the ongoing meetings of the latest committee to look at the issue, known as the Oak Resources Committee.

Set up by the county Board of Supervisors in August in response to a grand jury report, the committee is charged with evaluating the effectiveness of the current level of protection for oaks. The grand jury called for an ordinance for mandatory protection and preservation of oaks, with more enforcement staff and severe penalties.

With many of the county's coast live oaks, valley oaks, and blue oaks growing on privately owned land, oak protection is a sensitive issue involving property rights, enforcement questions, and urban-versus-rural values. It's a controversy that's been going on locally for at least a decade.

"While proponents of oak protection debate the effectiveness of voluntary versus mandatory regulations, bulldozers plow full steam ahead through San Luis Obispo County's remaining oak woodlands," stated a 2004 article in California Trees, a publication of the National Tree Trust.

The Nov. 13 meeting of the Oak Resources Committee studied the details of Atascadero's native tree ordinance, and also looked at the tree removal standards set out in the county's land-use ordinance.

"The county's current ordinance is one page, and it's mostly exceptions. Very little is actually protected," said SLO County Supervisor and meeting facilitator Jim Patterson as he handed out copies of the law.

Patterson also spoke about the native tree inventory now underway in Atascadero, and related it to the committee's charge to quantify oak resources in the county.

"We have the same problem in Atascadero as in the county: We don't know what we have," he said at the meeting.

Aerial surveys have recently been carried out for the 38-square-mile Atascadero Colony, using digital imagery to identify and count trees by species. "Ground truthing" on Eagle Ranch in southern Atascadero was completed the week before to verify the aerial images, Patterson explained.

"We'll be able to monitor what's happening in our oak forest, and how it's changing," he said.

Funding for the project came from Atascadero's oak mitigation fund, which was paid into by developers whose construction projects resulted in oak destruction.

Mitigation required for removing mature oaks around the county often consists of replanting one-gallon-size oak seedlings. But little is known about long-term survival rates, the meeting was told.

"It's best if you plant acorns instead of one-gallon trees. But a lot of people look at a little acorn and can't see the mighty oak it will become," said Bill Tietje, a resources specialist with UC Cooperative Extension's oak woodlands program and a member of the committee.

A voluntary approach to oak woodlands management is advocated by another group, the Native Tree Committee of San Luis Obispo County, which was set up by the Board of Supervisors 10 years ago in response to citizen requests for an ordinance. The group has since worked with schools to grow and distribute thousands of oak seedlings, but has no information on their survival rates on the land, the meeting was told.

A mandatory oak tree ordinance in Santa Barbara County has been "almost impossible" to enforce and has been counterproductive, as some landowners have stopped caring for or planting oaks for fear of future penalties, according to a report from Lottie Martin, Santa Barbara County oak resource specialist.

Patterson said in an interview that he would be "surprised" if the committee recommends a mandatory ordinance, suggesting that it may instead recommend better follow-up and monitoring for mitigation efforts, as well as closer tracking of oak-tree removals.

The committee meets again on Nov. 20 from 6 to 8 p.m. at the Farm Bureau on Tank Farm Road in SLO, and the public is invited. Its final report and recommendations will be presented to the Board of Supervisors on Dec. 19.