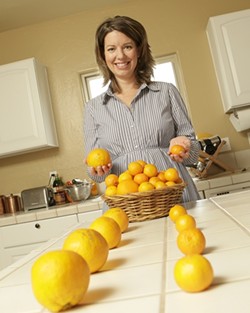 Obesity, which is defined as a Body Mass Index (BMI) greater than 30, causes such severe health problems as heart disease, Type 2 diabetes, various cancers, and labored respiration. Kenneth Thorpe, chairman of the department of health policy and management at Emory University, predicts an obese person will face, on average, $8,315 in medical bills in 2018 compared to $5,855 for an adult who maintains a healthy weight.

Nearly one third of all local children between three and five years old are at-risk or overweight, according to a 2005-2006 SLO Public Health Department study. Data from the California Department of Education, 2005-2006, show 32.1 percent of SLO County fifth, seventh, and ninth graders are at-risk or overweight and 68.4 percent are physically unfit.

Moving toward prevention starts with educating children. “Unfortunately, school wellness policies mandated by the state have been shelved due to budget cuts,” Vanessa Adama pointed out, who’s a health education specialist for the San Luis Obispo County Public Health Department. Adama said, “A lot of recent studies show that academic performance increases with good health—kids are more attentive and stay on task.” But sports programs and physical education classes often have been sacrificed to save academics during budget crises.

The organization Healthy Eating, Active Living-SLO (HEAL-SLO) formed in 2005 to help spread awareness of the local obesity problem, and in conjunction the SLO County Board of Supervisors, created a childhood obesity prevention task force (COPTF) in 2006 to develop a county-wide action plan, which was completed the following year. Resulting efforts have been funded by the Community Foundation and a grant from The California Endowment.

HEAL-SLO has targeted two pilot schools: Oceano Elementary School, in Oceano, and Lillian Larsen Elementary School, in San Miguel. Before policies can be imposed that would reduce student obesity, the group is working to “create exposure to staff, parents, and kids to create a landscape that’s ready for policy change,” the grant coordinator for Oceano Elementary, Kelly Lynch, explained. As part of the process, the group is encouraging students to appreciate vegetables through a Harvest of the Month program. Every month, students taste a new vegetable, introducing them to healthy foods they may not have had before, and encouraging them to take their experience home.

Both schools send out a monthly newsletter—in Spanish and English—that reports upcoming healthful events, recipes to accompany the Harvest of the Month choice, and healthy activities for kids. But HEAL-SLO is pushing for strict policy changes. Currently, the group is working on a “recess before lunch” program. Moving recess ahead of lunch would result in kids eating complete, balanced meals instead of rushing to eat sweets and discarding the rest so they can play. Laverne Buckman, Lillian Larsen Elementary’s grant coordinator, said a few teachers took it upon themselves to switch recess and lunch there, and love the outcome. According to Buckman, the teachers found their students could better concentrate after the swap.

Altering children’s unhealthy lifestyles requires parents to be good models, HEAL-SLO recognizes. To help parents toward fitness, the organization’s website has a link for information about prescription walking trails throughout San Luis Obispo County. In that regard, SLO Parks and Recreation Department offers free ranger-led hikes and several free health seminars monthly on such nutrition aspects as distinguishing good carbs from bad carbs, and diets to prevent heart disease.

Ultimately, weight loss and exercise among parents and children depend on motivation. As Dr. Nicholson of Cal Poly advises families: “Take one small step and do it consistently for a month—little changes like using a smaller bowl, committing to a 15 minute walk a day, or parking a bit further away from the store than you usually would.”

Contributing writer Courtney Brogno is an instructor at Cuesta College and Cal Poly. Contact her via the editor at econnolly@newtimesslo.com.