After spending a few decades wearing a variety of hats in the entertainment industry, best friends Scott D. Roberts and Scott Disharoon decided it was time to try something totally different: take over a hole-in-the-wall pizza shop.

Roberts fell in love with the Central Coast region years ago when his documentary film, GasHole, had a stint at The Palm Theatre in San Luis Obispo. An opportunity arose for the pair to purchase Ocean Front Pizza in Cayucos last year, and they got to work perfecting their pizza pie.

"He was always interested in food—he was a foodie for years," Roberts said of Disharoon. "He consulted with Peter Reinhart"—author of American Pie: My Search for the Perfect Pizza—"to work on the sauce and our dough for months and months, and finally got it to where it was like, this is it."

Roberts and Disharoon took over ownership in August 2021.

"People were responding to the pizza, our numbers kept increasing, and we were really happy," Roberts said. "Then on Christmas Eve, my buddy [Disharoon] had a heart attack and never woke up." 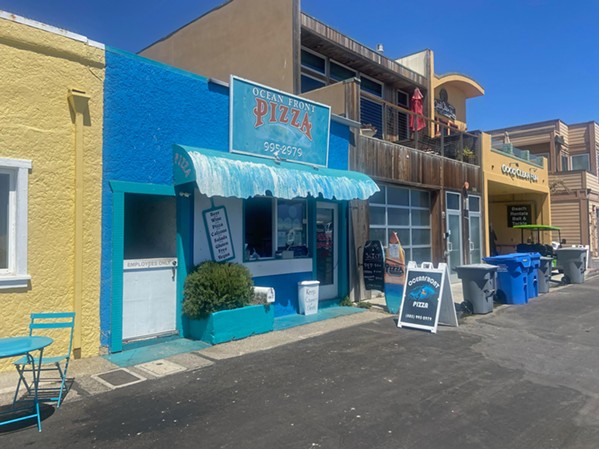 Losing a best friend and his business partner all at once was incredibly tough, Roberts said.

"I didn't know what I was going to do," he said. "If we were going to sell it, or what, because it was really his dream. We closed from Christmas Eve until almost February. I decided to reopen, hired some people. We keep growing every month, and here we are."

While Roberts never expected to be doing it alone, his passion for simple, delicious pizza—and for carrying on Disharoon's legacy—is evident in every slice.

Roberts arrives at his little shop on Ocean Front Avenue every morning at 8 a.m. to start kneading a new batch of dough for the day. The pizzas are always made with fresh ingredients, using dough and sauce recipes carefully concocted by Disharoon before he passed away.

"We produce a lot of pizzas. It's amazing how many pizzas we make," Roberts said. "We make a certain amount of dough every day, and if we run out, sometimes we're done at 5:30. It's not that we're trying to [limit]—it's a space issue, because we're very small."

When perfecting the dough recipe, it was important to Roberts and Disharoon that their pizza taste delicious immediately out of the oven, but that it would also make great leftovers.

"That's something that we're really happy about: A lot of people have said, 'Your pizza is great the next day too,'" said Roberts, who personally enjoys eating his pizza leftovers cold.

Equal attention to detail goes into Ocean Front's sauce and cheese. The cheese is shredded straight off the block, making it as fresh as possible and free of chemical preservatives found in bagged cheese.

"We wanted a sauce that uses really fresh ingredients," Roberts said. "We dress it up with some secret stuff we put in there. Just a nice balance, not too spicy, not too sweet. We let the tomatoes speak for themselves." 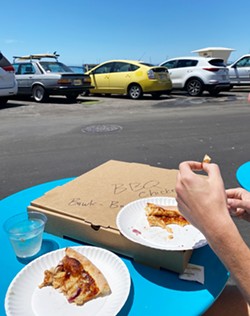 "The Cayucos Sausage Company here in town does a special sausage for us that we use, an Italian blend, and that's really popular," Roberts said.

I tried another classic, the BBQ Chicken pizza, and from the first bite it was clear that Ocean Front Pizza knows how to put together a pie—best enjoyed while watching the waves crash, which are a stone's throw from the restaurant's front door.

The freshness and simplicity of the ingredients was evident: dough, cheese, chicken, red onions, and barbecue sauce working together in exquisite harmony. The chicken was juicy and tender, and the barbecue sauce was just the right balance of sweet and smoky. I can also confirm that Ocean Front's pizza tastes just as great the second day.

"We cut all the veggies fresh, the red peppers and the onions and tomatoes, everything is fresh," Roberts said. "We get our lettuce every morning, so the salads are all made the same day—nothing's ever the next day. We also do a really good calzone, and a garlic flatbread, which people really like."

For the gluten-free folks among us, Ocean Front offers a gluten-less crust, and vegans will rejoice over the vegan cheese you can opt to top your pizza with.

Keeping things local and sustainable is a guiding principle for Roberts, and not just in how he runs his business. His 2008 documentary, GasHole, investigated how oil companies buy and hide fuel alternatives in order to keep selling more expensive gas to consumers. Roberts has plans to produce a follow-up documentary to see how things have evolved for the alternative-fuel industry.

Roberts continues to grieve the sudden death of his best friend and co-owner, but he said he's slowly "turning the corner mentally on being in here."

"When you're an owner/operator, you're in here 12, 13 hours a day together," Roberts said. "There's just so much of him here, and I thought it would be really difficult to be in this space and not be completely depressed. But it's going really well, and his [Disharoon's] daughter is graduating high school this year and she's going to Cuesta, so she's moving up from Manhattan Beach and is going to work here this summer.

"She's very interested in this and continuing the legacy from her dad." Δ

Staff Writer Malea Martin will have one pizza for here and one to-go. Reach her at mmartin@newtimesslo.com.