A routine task ended in harsh words and controversy at a recent Oceano Community Services District (OCSD) meeting, where the board of directors took an unusual step and barred a fellow board member from serving on any committees in 2020.

At an OCSD meeting on Dec. 11, the board approved a motion 3-2 to prohibit board member Cynthia Replogle from serving on any voting or non-voting committees and from obtaining any community liaison or subject matter assignments for the duration of 2020. 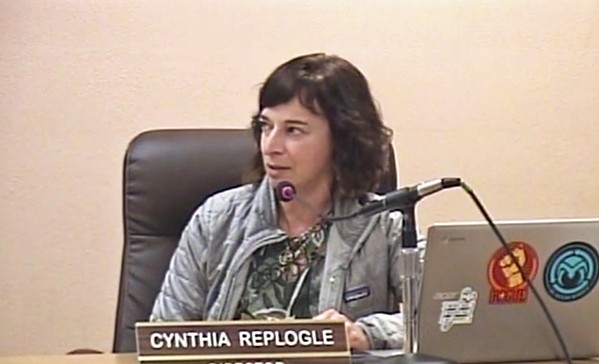 The motion was introduced by board member and Vice President Karen White, who said Replogle's "continued protests and opposition to the actions that have already been taken by the majority of this board" are destructive to the OCSD and its goals.

"I think it's so bad for our community," White said at the meeting, "and it's impossible for this board to function if we're functioning as individuals, because our fiduciary duty is to the community and to the actions that we've taken."

White suggested the ban on Replogle's participation just before the board was set to consider its committee assignments, an annual and typically straightforward chore. In a prepared statement, White said at the meeting that Replogle—a local known for her environmental- and conservation-focused views—has continually and openly opposed projects and policies already approved by the OCSD board majority.

Board member Shirley Gibson was quick to second the motion and said that once an item is discussed and approved, it's the board's responsibility to support the decision, whether they agree with it or not.

"Director Replogle continues to disagree and continues to criticize our board on social media and in appearances before other governmental bodies," Gibson said. "Her behavior undermines our board and is destructive to the community."

But Replogle punched back and said that every time she's shared her own opinion on a matter publicly, she's made it perfectly clear that it's just that: her personal opinion. It's not uncommon for public officials to share their reasons behind voting for or against something after the fact, Replogle said, noting that it helps give the community a more well-rounded perspective on current events.

Replogle called the ban on her participation in committees an "obscene" attempt to squelch her First Amendment rights, and legal counsel for the OSCD confirmed that board members do not give up their right to free speech once elected.

"What the board voted on doesn't put a muzzle on me representing a different opinion," she said.

Board member Gibson rejected the allegation that this is a free speech issue and said all discussion related to a topic should happen before it's voted on, not after.

"We don't expect everybody to fall in line, but we do expect the support for the community," Gibson told Replogle. "And after the vote, if you disagree with it, you can be mute."

Replogle told New Times that although she's well aware that the board majority doesn't particularly like her or agree with her views, she was surprised that they took such drastic action. She maintained that the exclusion is a violation of her fundamental First Amendment rights and said she's already asked OCSD legal counsel to send her a written opinion outlining how this ban is legal.

If there isn't a legitimate justification, Replogle said she hopes the board will reconsider.

"A lot of people in the community are upset about this," Replogle told New Times, "and I'm hoping it inspires people to come out to the OCSD meetings."

On Dec. 18, Los Osos resident Julie Tacker told New Times that she filed a letter with the OCSD threatening to sue if the decision isn't reconsidered. The possible action against Replogle was not included anywhere on the Dec. 11 meeting agenda, Tacker said, but was carried out under the "guise" of "2020 committee assignments."

Had the item been included on the agenda, Tacker said the community would have had an opportunity to give input. But it wasn't, and so only one resident spoke on the issue at the Dec. 11 meeting.

"We had no idea," Tacker said.

The Oceano Beach Community Association also spoke out against the bar on Replogle in a Dec. 17 letter to New Times, calling the decision "petty" and "fascist."

The nonprofit questioned the legality of the decision and also noted that after the motion was approved, the board proceeded to divvy up the committee assignments in such a way that left the only board member of color, Allene Villa, without any positions with voting power or compensation.

Boardmembers Gibson and Linda Austin, who voted to approve the ban on Replogle's participation, and OCSD legal counsel Jeff Minnery could not be reached for comment before press time.

Boardmember White, who initially introduced the motion against Replogle, told New Times that a vast majority of committee and liaison positions have no voting power and all have little to no pay. White, however, would not comment further on the debate over Replogle.