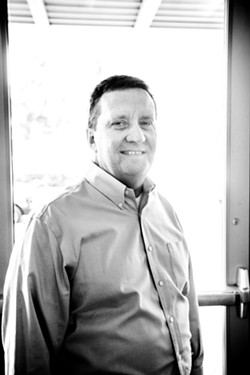 After roughly three hours of public comment and board discussion at their May 14 meeting, the OCSD Board of Directors voted 4-1 to appoint Ogren as their new district general manager and approve his contract. Director Jennifer Blackburn dissented, arguing that further salary and contract negotiations were necessary.

In a board of directors meeting agenda released on May 9, Ogren was announced as the “most qualified candidate” for the general manager position.

“It’s kind of like having an opening on your pickup basketball team, and then LeBron James shows up,” said OCSD board President Matt Guerrero, who spoke with New Times prior to the May 14 meeting. “Paavo has a proven leadership track record, and he has an amazing amount of experience.”

Pursuant to his lofty qualifications, Ogren requested (and will receive) an annual salary of $196,000 plus benefits, which will make him the county’s highest-paid CSD general manager.

“It’s a big salary, but we have high expectations for him,” Guerrero said. “Because Paavo has a superior ability to raise outside revenues through grants and can also eliminate the need for many outside contractors, we are anticipating cost neutrality.”

Though Ogren’s salary is roughly $70,000 per year more than the district paid Curtis, Ogren will be taking on fiscal roles formerly handled by a separate district accountant (who was paid $65,00 per year plus benefits), and also forgoing Curtis’ $3,600 per year car allowance.

“We are stepping up to the plate and taking a big swing here,” Guerrero said. “We don’t expect Paavo to be Superman or anything, but we think he is the right person to turn the OCSD into a model organization, using the good building blocks we already have.”

During the May 14 meeting, the majority of the 12 speakers at public comment objected to Ogren's sizeable salary. Director Jennifer Blackburn echoed some of their concerns and added that Ogren's contract was "more than we can afford."

The other four board members, however, came to Ogren's defense. Director Lori Angello said Ogren was "the most qualified person we've ever had inquire," Director Karen White said that the board "needs to grab the really good chance that we have here," and Vice President Mary Lucey added that Ogren would be "giving us back our future."

In his final remarks at the May 14 meeting, Guerrero mentioned that the OCSD has been "losing altitude" with their recent string of failed general managers, and said the "investment" in Ogren was ultimately worth it because "it's imperative that we start making some progress."

Speaking with New Times prior to his appointment, Ogren said there was “no compelling reason” for him to leave public works—where he’s been director since 2007—but there were “multiple exciting reasons” for him to work at the Oceano CSD.

“From a professional and public service standpoint, the Oceano CSD is where I can add the most value,” Ogren told New Times. “I love working on the community level, and I’m really motivated to get in there.”

Ogren said that he plans on working “lots of hours” at his new gig, and added that he considers steering the leadership-bereft and cash-strapped district a “welcome challenge.”

“Oceano has some very significant issues coming up, and I think this is a great opportunity for me to bring in some stability,” Ogren said.

At the conclusion of the May 14 meeting, Ogren said his start date at the OCSD would be "sometime in July."

Editor's Note: This article ran in a different form in the May 15 print issue of New Times, as the May 14 OCSD meeting was past our print deadline. This article retains the structure of the print story and updates relevant details.