A recently completed drainage project aimed at limiting flooding on Highway 1 in Oceano proved successful during recent rains, but some Oceano residents say there's still work to be done. 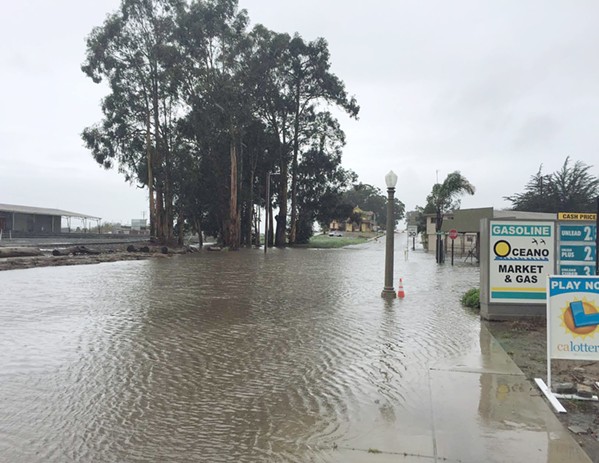 The Oceano Drainage Improvement Project is aimed at minimizing the frequency and severity of flooding on high-traffic roads neighboring the intersection of Highway 1 and 13th Street. It's been in the works for years, and, according to Capital Projects Manager Genaro Diaz, improvements included the creation of crowns in the center of several roads to convey storm water away from streets and toward Arroyo Grande Creek.

Construction wrapped up in June 2020, but there wasn't enough rain to truly test the completed project until the last week of January, when several inches of rain hit SLO County over the course of about three days. Although it was complicated in terms of funding and interagency collaboration, Diaz said the Oceano Drainage Improvement Project proved itself to be a worthwhile effort.

"That project—you don't even know," Diaz told New Times with a laugh. "If it was a diving competition, that's like a 9.8 triple flip with no splash."

While the intersection of Highway 1 and 13th Street would have previously looked like a small pond after after a relatively small amount of rain in a day, the roads were completely clear after 2 inches in 24 hours on Jan. 28.

The impacts were even noticeable a few blocks down Highway 1 at Quintessa Coffee Roasters, where owner Jack Quint said the project led to significantly less water around his building, which has been the victim of severe flooding in the past.

"We still get a slight river in front of our building and a big buildup in front of Chacho's," Quint wrote in a message to New Times, "but having 13th and Front drain was a huge help so cars can still drive through. Big improvement!!"

While the drainage project was also supposed to reduce inflow to the Meadow Creek Lagoon, residents living near the lagoon still saw flooding.

Steve Cascarano has lived next to the lagoon on Juanita Avenue for 13 years, and he said his street floods after every shower. Then cars and off-roaders speed through the neighborhood to splash through puddles, pushing damaging levels of water into people's houses. This most recent storm was no different. Despite repeated calls to the county, Cascarano said it feels like nothing ever gets done. The county usually just closes the road to through traffic, and people drive past the signs anyway.

"We're a little forgotten area down here," he said.

But SLO County Public Works Deputy Director Kate Ballantyne said residents near the Meadow Creek Lagoon haven't been forgotten. It's just a complex problem that takes a lot of time and money to fix.

The county is working on improvements to this area. The recently finished project on Highway 1 and 13th should help some, Ballantyne said, along with an improved drainage channel at the North Beach Campground that was completed a few years ago. More efforts are coming, too.

"We have been studying the Meadow Creek watershed and plan to start work this year to evaluate alternatives for the Meadow Creek Lagoon Restoration Project, Ballantyne wrote in a statement to New Times. "The purpose of this project will be to improve flood protection and habitat within the lagoon system. A contract for this project will be presented to the Board of Supervisors for approval on March 2, 2021." Δ