The Oceano Community Services District (CSD) boardroom was full on Jan. 25. Residents were there to hear presentations from the Five Cities Fire Authority fire chief and general manager about Measure A-20.

Some in the crowd wore red shirts that read "Yes On A Supporters." 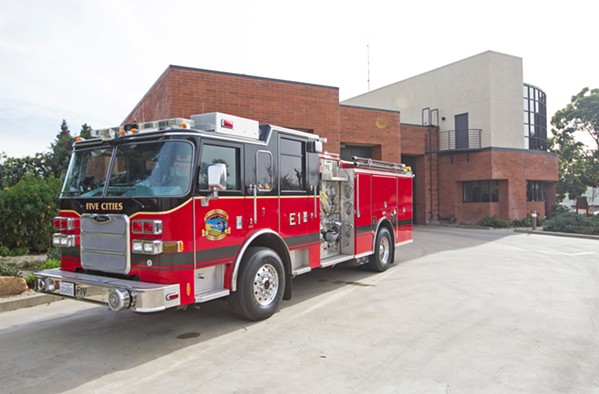 Measure A-20, if passed, would maintain rapid response times for medical emergencies and fire protection services, provide 24/7 staffing and emergency services, and a third full-time firefighter for the Fire Authority, which serves Arroyo Grande, Grover Beach, and Oceano. The measure would also fund the Oceano CSD's end of the Five Cities Fire joint powers agreement—an agreement of services paid for by Arroyo Grande, Grover Beach, and Oceano.

During public comment, three individuals said they supported the idea of funding the service but asked if there was another way to pay for it. District board Vice President Karen White responded by saying the district had looked into any and all possible sources of revenue available to it.

"We didn't start by deciding we needed a tax plan, but there just isn't any other place. That's it. This is all we got," White said.

Oceano CSD General Manager Will Clemens said Oceano's share of the Fire Authority cost is projected to go up to about $1.4 million. Currently, the district gets $1 million from property taxes to fund fire and emergency services.

In order for the measure to pass, it requires two-thirds of voters to approve it.

Arroyo Grande, Grover Beach, and Oceano approved an amendment to their joint powers agreement in June 2019 that established a backup plan if Oceano's measure didn't pass and it had to leave the agreement. If Measure A-20 fails, Oceano would cease to be a member of the Fire Authority on June 3, 2021. The amendment creates a pathway for the district's resignation and a 16-month "wind down period" to distribute assets and payment liabilities.

Following the resignation, Clemens said, the CSD would have to look into other ways of providing the service: Oceano could try to re-establish an independent fire department reliant on volunteer and/or reserve firefighters, or future services would be determined by San Luis Obispo County.

He said the county recently released a cost estimate for staffing the existing fire station in Oceano with Cal Fire personnel—approximately $1.6 million.

The county, Clemens said, will look at all potential options for the transfer of assets, facilities, property taxes, and other funding mechanisms from the district to the county while minimizing any impact to the county general fund. Δ