The first week of 2021 is forecasted to bring some much-needed rain to San Luis Obispo County, and for residents in Oceano, the coming showers could be the first real test of a recently completed drainage project aimed at limiting flooding on Highway 1.

The Oceano Drainage Improvement Project has been in the works for years, and in March, the SLO County Department of Public Works started paving a number of streets near the intersection of Highway 1 and 13th Street, where high-traffic roads are routinely closed due to flooding after even moderate rainfall. 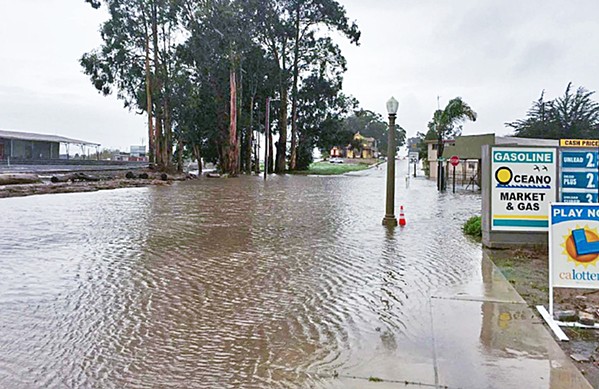 Construction wrapped up in June, and according to Capital Projects Manager Genaro Diaz, it's expected to minimize the frequency and severity of flooding events on roads neighboring Highway 1 and 13th Street and in hard-hit homes in the Meadow Creek Lagoon area.

"And just a reminder," Diaz told New Times, "this is not a fix-all."

Diaz said county funding constraints and the difficulties that often come with trying to repair state-owned roads like Highway 1 have long been the primary barriers in improving drainage in Oceano. That, he said, and Oceano's general geography, situated at a low point where water that runs off of nearby hills collects. There are similar ponding issues that need to be addressed throughout Oceano and SLO County in general, but Diaz said the intersection of Highway 1 and 13th is heavily trafficked by emergency vehicles and truckers, making it a critical location that received priority treatment.

The $6.4 million Oceano Drainage Project—which was funded by several local, state, and federal programs and grants, including the Oceano Community Services District Fund and a U.S. Department of Agriculture loan—most recently included laying pavement to create a crown in the center of several roads, so that storm water on the east side of Highway 1 is conveyed to Arroyo Grande Creek.

Although SLO County saw some rain just a few days after Christmas, Diaz said it wasn't enough water to truly test the new system. But he's confident it will make a big difference.

"So again if there's a large storm event you'll probably still see some ponding," he said, "but hopefully it goes away within a couple of hours."

Oceano residents and businesses owners like Jack Quint, owner of Quintessa Coffee Roasters, are welcoming any and all attempts at limiting flooding. Quint and his wife opened their Front Street coffee shop in 2018 and immediately noticed that every time Oceano had just moderate rainfall, it would lead to flooding on Front Street and in the alley behind his shop.

They've always been pretty much able to keep the water out of the building, but last year after a few days of heavy rain, several inches of filthy floodwater made its way into the Quintessa building. It didn't cause any major damage, but Quint said he'd rather not deal with such an incident again.

Another Front Street business, The Place on PCH, essentially gets about 8 inches of water inside every time it rains, according to owner Darcy Badiali. It's been such a consistent issue for so long that The Place lifted its floor off the ground with railroad ties. Now they just wait out the rain without issue, Badiali said.

Still, he said the pooling in the roads is a serious traffic hazard at an already dangerous intersection. Cars get stalled in the puddles and cause blockages, and emergency vehicles struggle to get through. Though Badiali said he's not 100 percent confident the drainage project will help, he's got his fingers crossed.

"I hope that it works," he said. "It just hasn't been tested. There hasn't been enough rain to test it." Δ